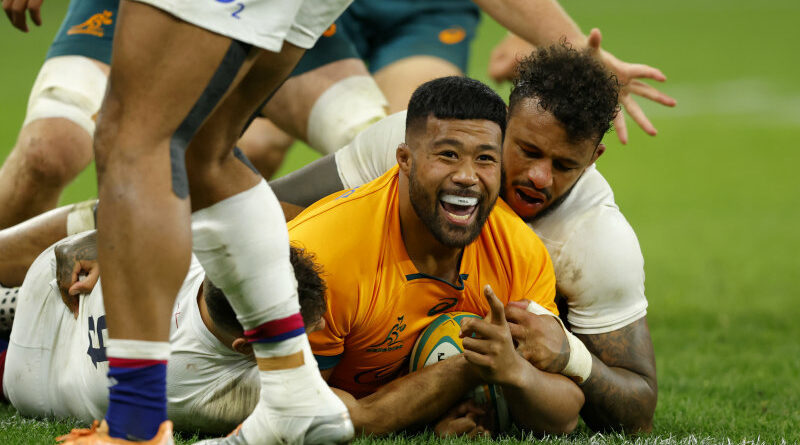 Chaos theory proved Australia’s friend after a drama-filled game in which the Wallabies lost their playmaker before kick-off and played 47 minutes with 14 men, but still produced a drought-breaking win over England.

In a stirring triumph, Dave Rennie’s side snapped an eight-match losing streak against Eddie Jones’ teams after rallying from a second-half deficit and a series of injuries.

The Wallabies appeared to be in major strife when Quade Cooper was ruled out in the warm-up due to a calf injury, and even more so when Tom Banks and Allan Ala’alatoa both left the field injured. When Darcy Swain was sent off for headbutting in the 33rd minute, the good money was on England turning the screws on the chaotic Wallabies.

But the thing about chaos theory is that unpredictability can affect all parties, and it was England who went backwards.

With their extra man advantage diluted by losing two men to the sin bin, England couldn’t respond to Australia’s high-pace game. Even after England pulled away to a 14-9 lead in the 59th minute, the Wallabies didn’t stop throwing punches and scored three tries in the last quarter to seal a memorable win.

England bagged two late tries to narrow the score but it wasn’t enough. Australia’s last win over England was in the 2015 Rugby World Cup. 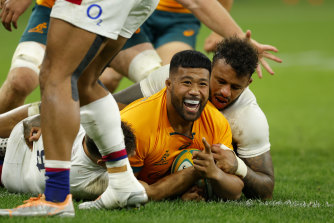 Folau Fainga’a dives over for the Wallabies.Credit:Getty

“We had to dig deep and go to the well here a bit today and come up with a lot of solutions,” Wallabies captain Michael Hooper said.

“Really proud of our guys and the effort they put in with a lot of considerable changes there at the last minute. It’s a start but a long way to go. How good is sport. You can’t script that stuff. You can do all these plans and they go out the window. Proud of the guys to keep a calm head.”

The Wallabies were rocked before the game had even started when key playmaker Cooper suffered a calf injury late in the warm-up, forcing a late reshuffle. Noah Lolesio was moved to No.10 and James O’Connor, who’d been doing speaking gigs in the corporate suites, was rushed to the dressing room and onto the bench.

Cooper told Stan: “I started to tighten up in bits of the warm-up. I wasn’t sure, I thought maybe it was something to do with my socks being too tight … turns out hopefully it’s just a small strain. Hopefully, it’s nothing serious.”

The loss of Cooper was not ideal, and the rusty Wallabies looked out of sorts from the opening exchanges.

England began with powerful yardage from their forwards and Owen Farrell opened the scoring in the fifth minute with a penalty. He kicked another in the 19th minute as poor handling and poor discipline scuppered what small amount of possession the Wallabies had.

England went close to scoring before that penalty but a superb tackle from Marika Koroibete on Joe Marchant saved the day.

Things continued to go wrong for Australia in the 21st minute, when fullback Tom Banks fell awkwardly, after contesting a kick-off, and badly injured his elbow.

Lolesio got the Wallabies on the scoreboard soon after, via a rare scrum penalty, but minutes later Australia suffered more misfortune when prop Ala’alatoa came off with a head knock.

The Wallabies finally got into the match and a lovely break from Angus Bell, and an offload, saw Rob Valetini go close to the line. England repelled the Wallabies successfully on later phases.

The madness really got going in the 33rd minute when Darcy Swain had his hair pulled by rival lock Jonny Hill at a maul, and reacted poorly by headbutting the Englishman. Referee James Doleman gave Hill a yellow and had no option but to send Swain off.

“You’ve got to walk away. It’s a really stupid error from Darcy Swain,” former Wallabies centre Tim Horan said in commentary. “He’s going to get about three weeks for that.”

Australia pulled the scores level after the half-time hooter, and they went ahead when Lolesio nailed a third penalty. But England made full advantage of their extra man when Hill returned.

A rolling maul on the English line saw the visitors power over and prop Ellis Genge was the man given the try.

The Wallabies managed to repel England when they returned to the same corner soon after, which kept the locals alive in the contest.

Farrell nailed a penalty to extend the lead to 14-9 but Marika Koroibete began to up his involvement, and after he regained a kick-off, the Australians went on the attack.

Jordy Petaia scored soon after when Australia’s high-pace attack managed to stretch the England defence on the right edge.

England’s wheels began to wobble when Billy Vunipola was yellow carded in the 66th minute for high contact and the Wallabies immediately went back on the attack. A rolling maul appeared to have broken down but reserve hooker Folau Fainga’a surged for the line and scored again.

Peter Samu scored again soon after and it was just as well, with England rallying late to score twice in the dying minutes.

Watch every match of the July Test Series on the Home of Rugby, Stan Sport. Kicks off this weekend with Wallabies v England (Saturday 7.15pm AEST), All Blacks v Ireland (Saturday 4.30pm AEST), South Africa v Wales (Sunday 12.55am AEST) and Argentina v Scotland (Sunday 5.05am AEST). All streaming ad-free, live and on demand only on Stan Sport.

Premiership will resume on August 14 with Harlequins facing Sale

Paul Grayson: Why England can be champs of Europe in rugby as well as football