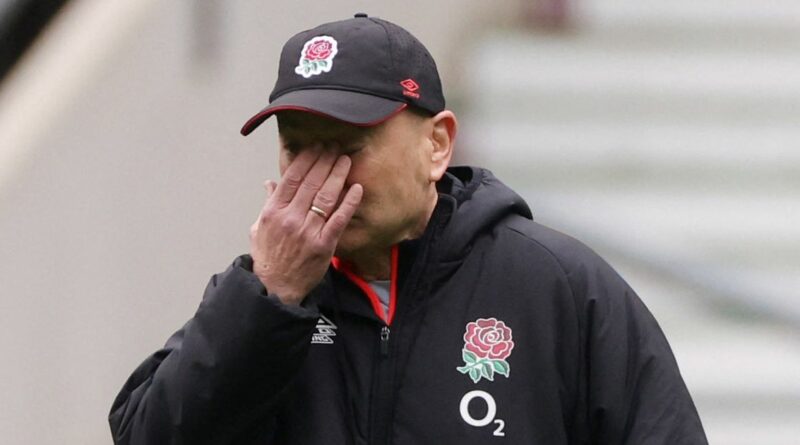 Eddie Jones has been warned by the RFU that he could yet be a victim of 'Project Everest' ahead of the 2023 Rugby World Cup.

The term is the name given to the organisation's long-term plan to eventually replace the Australian, who has been head coach of England since 2015 and took the side to the World Cup final in Japan three years ago. The project involves developing young Premiership coaches as well as identifying the 62-year-old's successor.

Jones is under extreme pressure following England's poor showing in the Six Nations again, losing to Scotland in the opening game before recording wins over Italy and Wales. A record home defeat to Ireland saw them confined to third place before they even kicked off on the final weekend in Paris though, where they were beaten by France as Les Blues sealed the Grand Slam.

Despite the underwhelming campaign, RFU chief executive Bill Sweeney originally backed Jones to remain in charge for next year's World Cup in France. However, he's now appeared to alter that stance, stating the head coach is not "bulletproof" ahead of a summer tour down under, where they'll play three Tests.

"No one is indispensable. I’m not indispensable," he told The Times . "Anyone can go at any particular time, but that happens when there is a loss of confidence. People stay in their role because there is a belief that you are still heading in the right direction, even when, sometimes, the results might not back that up.

England also endured a poor Six Nations campaign in 2021, again only notching two wins, although the lack of game time that had plagued the majority of the squad during the Covid pandemic was perceived as a mitigating factor. Sweeney though, acknowledged that the side had been under-performing prior to 2022.

"We haven’t performed well in the last two Six Nations. Three tries [from games against Scotland, Wales, Ireland and France] is not an acceptable return. To have a conversation with him saying, 'That’s not acceptable' — of course that happens.

"I don’t think we would ever say two wins out of five is acceptable. There is a constant process of review. What we do have, and we started it off two years ago, is a pretty good coaching succession plan in place, looking at all the various different options. That will come into force [if Jones goes]."

Jones was defiant following the loss in France, declaring himself "excited" at the young make-up of his squad, with no 10 Marcus Smith in particular one of the standout players in the tournament. However, former England centre Will Greenwood has said the RFU shouldn't hide behind the excuse that now isn't the right time for a change of personnel.

"They need to make a decision quickly," he told talkSPORT . "I don’t buy there’s not enough change before the World Cup. There is always enough time if you feel it's not going well."

Greenwood, who won 55 international caps, stopped short of calling for Jones be sacked, but did concede England had been "hugely frustrating" to watch in the Six Nations.

Karmichael Hunt ‘feels for’ Israel Folau, but says Waratahs must move on