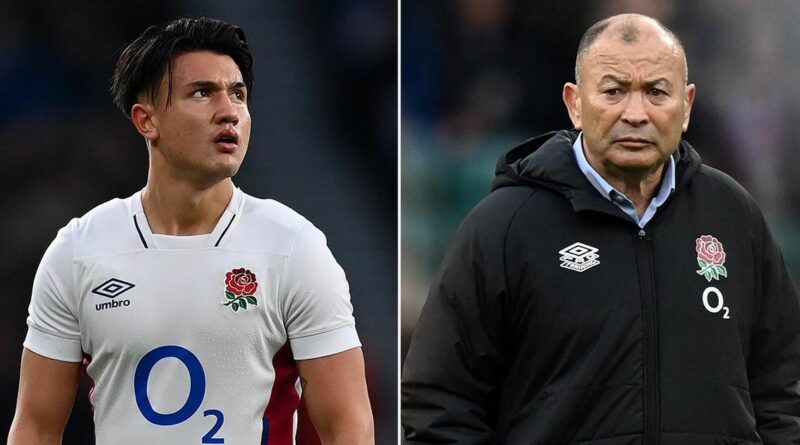 For all the debate regarding who should be England 's starting fly-half at the 2022 Six Nations, Wales icon Shane Williams is unequivocal in his belief that the reins belong to Marcus Smith alone.

Promoted to the No. 10 jersey—initially alongside captain Owen Farrell —during the recent autumn internationals, the Harlequins puppeteer has taken little time to prove he belongs at Test level.

After lifting Quins to an unexpected Premiership title last year, Smith has translated his talents to the international arena, tipped to now lead England's fortunes for the next decade or so.

But with Saracens star Farrell nearing a return to fitness, discussion regarding whether Eddie Jones will stick with what he knows or continue to invest in Smith's development is fierce.

Williams—Wales' all-time top try-scorer with 58 to his name—even went so far as to compare the 22-year-old Smith with former Barry John, a national icon of the 1970s who also made the marvellous appear mundane.

Smith kicked the winning points at the Arms Park on Friday evening when Quins edged Cardiff 36-33 in the European Champions Cup, which Williams took as the latest proof yet he deserves the start for England.

Not only that, but the former wing whiz suggested failure to do so should cost him his job.

"What a performance, what a player," Williams wrote in a recent Rugby Paper column. "At a ground where Barry John used to strut his stuff here was a player from a similar mould as 'The King'.

"If Eddie Jones doesn't give him first shot at the England No.10 jersey in the Six Nations, then the RFU should sack him immediately.

Who do you think should be England's starting fly-half at the 2022 Six Nations? Let us know in the comments section.

"He makes things happen around him and he must be a nightmare to play against.

"Three tries came from his superb kicking game and he scored one himself as well. Is there anything he can't do?"

The major casualty as a result of Smith's success is Leicester Tigers fly-half George Ford, who wasn't even included in the autumn squad despite his stunning form at club level.

The Sale Sharks-bound playmaker has led Leicester to the top of the Premiership and is enjoying some of his best rugby to date, but Smith appears to have won the coach's favour as his fly-half of the future.

Ford, 28, was given hope of being brought back into the fold amid rumours England could expand the size of their squad for the Six Nations, though even then Ford would likely be a third-string alternative at best.

Farrell was shifted to England's centre as a means to accommodate Ford during his time in the England team, and it's looking likely the captain will make the move back to midfield to make room for Smith.

It's been suggested by many that Jones would be better off dropping Farrell altogether in favour of a more natural fit at No. 12, but the Australian has long been loyal to his Sarries talisman.

The Red Rose begin this year's tournament with a trip to face Scotland at Murrayfield on February 5, a pressure-filled first fixture considering they lost at home to Gregor Townsend's men last year.

That was the first stumble en route to an all-time low fifth-place finish, but hopes are high that Smith and other new faces can help inspire a resurgence.