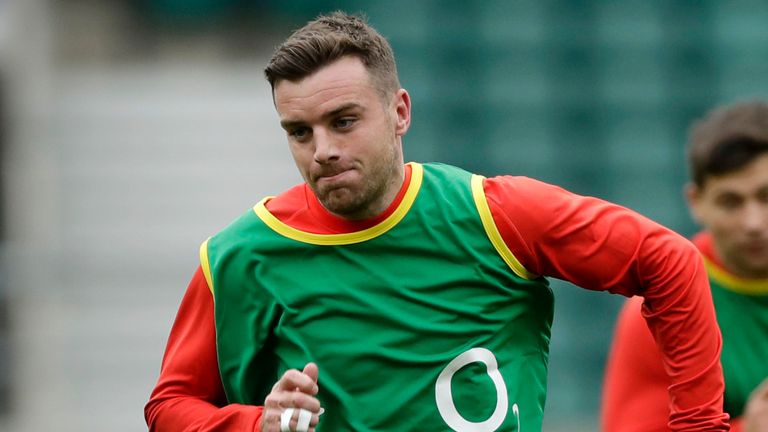 George Ford has won his fitness battle after England declared him ready to face
Ireland in Saturday’s Autumn Nations Cup clash at Twickenham.

Ford missed the emphatic victories over Italy and Georgia that opened the end-of-year campaign because of a pre-existing Achilles injury but the Leicester fly-half has made a full recovery.

Head coach Eddie Jones names his team on Thursday morning with Ford pushing hard to either reclaim the playmaking duties from Owen Farrell, forcing England’s captain to move to inside centre, or supplying cover from the bench.

A 25-man squad has been retained to finalise preparations for the visit of Andy Farrell’s team to Twickenham with one back and one forward to be jettisoned, unless Jones opts for a six-two split on the bench. One missing face is Wasps flanker Jack Willis, who delivered an outstanding try-scoring debut against Georgia but has now been frozen out.

Overlooking a rookie who has performed well is a well-trodden path by Jones, who likes to deliver well-timed shots across the bows to keep his players hungry.

“We want him to be a better player week in, week out and we feel he’s doing that. He has a good appetite to learn and has a bright future ahead of him.

“He did well against Georgia, his first cap produced a try and he performed really well in tough conditions for a loose forward.

“He really had to dig deep and he did. It was great for a forward to put in a debut like that.”

When asked about Willis’ omission, Proudfoot said selection is partly shaped by a detailed analysis of the opposition. “You look at what you’ve got at your disposal. You look at the challenge. And then you pick the best 23,” he said.

“Each guy has got to be pushed during training sessions to show that he’s in the best form and we’re looking at what the opposition presents us.

“So we’re looking forward to meet that challenge, how best can we nullify that threat of theirs, and we select what we feel is the best team to counter that threat.”