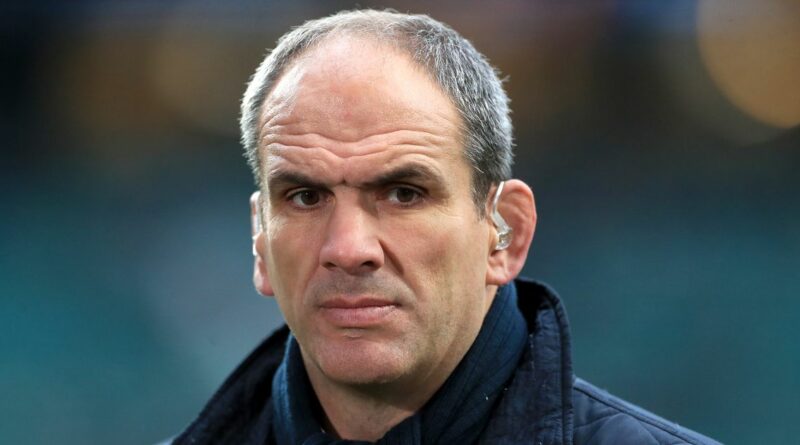 Rugby Union legend Martin Johnson has told how he desperately battled to save the life of a neighbour who suffered a heart attack.

World Cup winning captain Johnson, 51, sprinted down the road to grab a defibrillator from his local village hall.

He and wife Kay then took turns administering CPR to the man while waiting for paramedics to arrive.

The patient tragically died with tests later revealing nothing could have been done to revive him.

But Johnson, who became an expert in CPR following the tragic death of 14-year-old family friend Joe Humphries, says his training gave him the confidence to act quickly.

What is your view? Have your say in the comment section

The dad-of-two has launched a free online CPR course with UK Coaching and a charity set up in Joe’s memory.

Johnson said: “My wife was already doing CPR so I asked ‘have we called the ambulance?” ‘Yes’.

“Has anyone got the defibrillator?” ‘No’ – I will do that.

“One neighbour was already going to the village hall, I was a bit quicker so I ran and we got it back together after a 200yd sprint.

“It was a big team effort.

“The outcome was that we couldn’t bring him back because it was heart disease not cardiac arrest.

“But afterwards my wife and I said to each other ‘thank God we have been trained’.

“We did everything we could and took solace from that.”

The dramatic incident happened in 2017 in Johnson’s home village near Market Harborough, Leics.

Just five years earlier Joe collapsed and died of a sudden cardiac arrest following a run with a friend.

Johnson, who is close pals with the schoolboy’s parents Steve and Angela, said: “It doesn’t matter if you are fit and healthy – it can just jump on you.

“Eriksen surviving is not a miracle, he was unlucky to have that happen to him but very lucky medical people had eyes on him right away.

“Joe had just finished a training run with a friend, said ‘cheerio’, headed for home and never made it.

“He was on his own and if Christian Eriksen have been on his own in a hotel he wouldn’t be with us now.”

Johnson is a patron of the Joe Humphries Memorial Trust, which aims to teach CPR skills and promote defibrillator awareness.

The Mirror is calling for the government to make defibrillators a legal requirement in all public places.

When asked if he supports the campaign Johnson said: “Absolutely yes, because that’s the only thing that will save you in that situation.

“We have fire extinguishers everywhere by law and there’s more heart attacks than fires.

“The prices of defibrillators are coming down all the time and we’re almost at the point where you can have them in the home.

Johnson has worked with Fabrice Muamba, the JHMT, UK Coaching,

Anyone can access the material for free by registering at www.ukcoaching.org/sca Mark Gannon, UK Coaching CEO, said: “Both Martin Johnson and Fabrice Muamba feature within the interactive online course, and I’m very grateful for their support in helping us to raise awareness of the issue.

“Every person trained, could be another life saved.”

Johnson added: “If you have got someone on the floor who has collapsed with no pulse what are you going to do?

“You may think ‘it won’t happen to me’ but if it does and you haven’t done any training you will have to live with that forever.”

Fergus McFadden: Ireland & Leinster back to retire at the end of season

Can Japan stop the Springboks in World Cup quarter-final?