There's rarely such a thing as the perfect deal when it comes to transfers in sport; no matter the athlete, teams or fan bases involved, it seems inevitable someone along the chain will come away a loser.

As those who illicit most emotion from the supporters invested, it's often players who cop the flak when they decide to move, with money often mentioned as the key motivator for 'mercenaries' on the move.

The term was thrown about following news of George Ford 's switch to Sale Sharks in 2022, with some of the belief he was abandoning Leicester just as they've regained a place of power atop the Premiership.

Former Tigers stalwart Austin Healey alleged as much in a recent Telegraph column, where he wrote the high-profile transfer is proof that " loyalty in sport is dead."

In fact, one could argue the move is evidence to exactly the opposite, with a player at the top of his game prioritising family and hometown connections ahead of sporting achievement.

"There are obviously family reasons attached to it, but I find it a bit strange that he has opted to move away from a side that has been paying him such high wages for only playing 15 games a season," Healey opined.

"Leicester, I should imagine, will have been keen for George to have seen out his career in the East Midlands. He is central to a lot of good that they do on the pitch, particularly now that they have turned the corner.

"For the board members, and the fans, it will feel like a proper kick in the b——s. They’ve been through a few years of difficulties, fighting relegation and suffering humiliating results. Just when the picture begins to look rosy again, George has gone."

One can forgive the former England utility's frustrations at the move considering the impact it threatens to have on Leicester's future success.

Do you think George Ford will lead Leicester to the Premiership title in 2022? Let us know in the comments section.

Those frustrations could prove short-lived if director of rugby secures the successor of his dreams, however, with rumours abound that Leicester have lined up South Africa star Handre Pollard as a replacement.

But the assertion that Ford should prolong his stay at Welford Road when "the picture begins to look rosy again" is a presumptuous one given the difficulties endured both in and outside sports over the past 18 months or so.

The global pandemic has served as a stark reminder to many as to what's really important in life, and it shouldn't come as a surprise that now—after a combined nine years of service to the Tigers—Ford is putting family first.

The Saddleworth native first left Leicester in 2013—again, when they were top of the Premiership pile—to join father Mike at Bath, while he also happens to run a coffee with elder brother Joe in their hometown.

If anything, the decision to leave a team en vogue and riding a rare wave of momentum should be lauded as proof that the motivations for moving must be genuine and heartfelt.

"To play my rugby in the North West, to be close to my family and to play a part in driving Sale Sharks forward is something I am hugely excited about and can’t turn down," Ford wrote in an Instagram post explaining his choice.

“I made my debut for Tigers 12 years ago this month and people that know me will understand how tough a decision this has been. I will be forever grateful for the opportunities the club has given me."

It's also testament to the fly-half's character that Ford has reportedly accepted a £200,000 pay cut in order to facilitate his Sale signing.

The Daily Mail noted the 28-year-old may have found himself subject to a reduction of his £650,000 salary at Leicester had he decided to stay.

Nevertheless, none can say it was the prospect of riches that tempted Ford to move back north, a particularly admirable decision considering he's in the prime of his career and possibly will never be back in the same position to haggle for a raise.

Ford is far and away the top points-scorer in the Premiership this season and almost unanimously playing the best rugby of his career despite finding himself firmly on the fringes of Eddie Jones ' England squad.

For any fear Leicester fans may feel knowing he's set to leave their ranks, imagine the doubt the player himself is facing as he prepares to leave all that (and potential future silverware) behind for far less money, playing in a far less prestigious team.

And yet Ford still described the opportunity as one he "can’t turn down" at this stage in his career, which has just endured an unprecedented period and forced many (not just in sport) to reassess what's most important to them.

The term 'mercenary' refers to an individual who's concerned with "making money at the expense of ethics," but the drive for Ford to be near his loved ones at this moment in history seems like the most ethical decision one could make.

After all, it seems contradictory for a 'rugby family' to criticise any desire to be close to actual family, raising an interesting debate in regards to where one's loyalties should lie, as Healey did.

Ford will leave Welford Road with just short of 10 Leicester seasons under his belt, having taken the club to consecutive Premiership finals in 2012 and 2013, winning them their most recent English title in the latter.

A rise in rugby investment during the professional era means players stand to make more money now than ever before, but not every high-profile deal has to be all that complicated.

An international athlete wanting to play close to home is about as far away from the modern mercenary archetype as one can get, and Ford's decision should be celebrated for its sentiment instead of derided as any kind of betrayal. 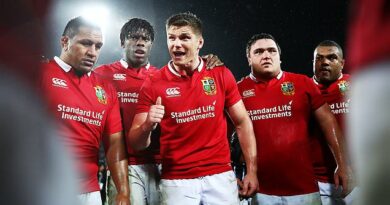