Home » Rugby Union » ‘He has challenges ahead of him’: Why Cooper is helping an England star

Quade Cooper freely admits he could have done with a Quade Cooper of his own to help him through the rough middle years of his career.

That’s why he’s happy to court controversy by helping England’s Marcus Smith, the Harlequins five-eighth with whom he’s likely to do battle with in the first Test in Perth on Saturday.

No matter the heat England coach Eddie Jones has copped for mentoring Wallabies centre Samu Kerevi in Japan. When Smith leveraged a mutual friend at Harlequins, Australia’s Ben Tapuai, before contacting Cooper on Instagram, the veteran playmaker was happy to help.

He told the Herald it was because he saw flashes of his younger self in Smith – off the field as well as on it – and saw an opportunity to be the sounding board he never had.

“It would have been great to be able to – when I was coming through the ranks – to be able to message Carlos [Spencer], Dan Carter, and these types of guys,” Cooper said.

“I played against those guys but we didn’t really get an opportunity to mix and mingle. Now … All the teams are a lot more connected in some way. 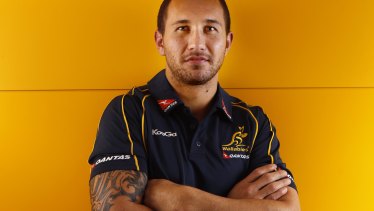 “With social media, being able to send a message – ‘hey mate, I’ve just got a few questions for you’ – that would have been amazing. But coming through, we didn’t have that, so we just had to learn on our own.”

Cooper and Smith were the same age when they won their first Tests against England and Australia, respectively, in the No.10 jersey.

For Smith, England’s 32-15 victory last November marked his arrival on the international stage, indicating a new playmaking partnership with the experienced Owen Farrell outside him at No.12.

More than a decade earlier, Cooper had the same moment in a match against England. The Reds playmaker had started at No.12 outside Matt Giteau on the spring tour the previous year, but had been handed the reins against Fiji and was named man of the match after leading the Wallabies to a 27-17 win at Subiaco Oval in Perth in 2010.

“Probably some of those similarities is why I enjoy watching him play.”

Cooper was already displaying shades of the enfant terrible persona that would come to overshadow his on-field exploits during the next four years, but a riotous season with the Reds had earned him an Australian Super Rugby player of the year award and he carried that form into the 2010 Test season.

Cooper’s “journey”, as he calls it, went from there, undulating with the highs of the Hong Kong Bledisloe Cup boilover and a 2011 Super Rugby title and the lows of persistent criticism of his defensive failings and his membership of the maligned “Three Amigos”, alongside James O’Connor and Kurtley Beale.

His Test career tapered off by 2017, a frustrated Cooper chafing against a system he felt misunderstood him. There were run-ins with administrators and antagonistic New Zealand crowds, rejection from the Reds and one last good season in Super Rugby, with the Rebels in 2019.

Setting up camp with Kintetsu in Japan’s second division (Cooper and Genia led the team to promotion to League One this year), Cooper says it took separating his self-worth from his rugby to allow him to put his hand up to “hold pads” for Dave Rennie last year, precipitating the text exchange that reignited his international career. 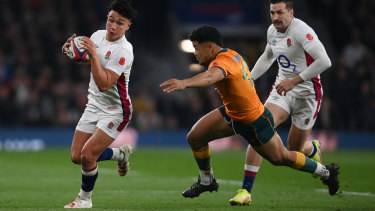 Marcus Smith, left, in his first Test win against Australia.Credit:Getty

“I saw my worth as ‘Quade Cooper, Wallaby’,” he says. “Now I play [rugby] because I enjoy it. I play it because it’s part of who I am, but it’s not all of me, it’s not everything.

“The work I do every day allows me to be ready for this, to have the best opportunity to do my part. Now, the way I live every day, hopefully that rubs off on the other 22 guys and that they’re in the same place.”

Smith and Cooper are yet to meet in the flesh but intend on sharing a beer in the sheds no matter Saturday’s result.

Cooper, 11 years Smith’s senior at 34, says he sees “bits and pieces” of himself in the Philippines-raised Smith, namely the latter’s attacking flair.

“But he’s his own man and his own player as well,” he adds. “Probably some of those similarities is why I enjoy watching him play. I believe he’s a great player in his own right, a freak talent, very enjoyable to watch … but I know there’s much more to him than just those things.

“I’m sure he has all those challenges ahead of him at some point. It’s more than just his skill set, but being a young guy coming through in the No.10 jersey in a team that has a lot of prestige to it, him with England and me with Australia.”

Watch every match of the July Test Series on the Home of Rugby, Stan Sport. Kicks off this weekend with Wallabies v England (Saturday 7:15pm AEST), All Blacks v Ireland (Saturday 4:30pm AEST), South Africa v Wales (Sunday 12:55am AEST) and Argentina v Scotland (Sunday 5:05am AEST). All streaming ad-free, live and on demand only on Stan Sport. 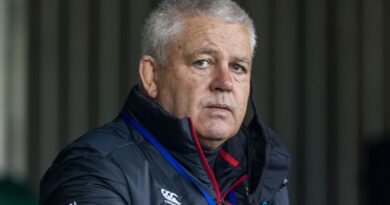