Leinster had for some time admitted defeat in their attempts to prevent another interprovincial move before Jack McGrath’s switch to Ulster, while still under an IRFU central contract, was finally confirmed.

The anger that visibly boiled over in the wake of Joey Carbery’s sensational summer switch to Munster had evaporated once the IRFU performance director David Nucifora began to switch his attention towards the loosehead prop.

“We want Jack McGrath to stay in Leinster,” Leinster CEO Mick Dawson told the Irish Independent last February. “If a guy wants to move because he can’t get into the team here or feels that he can get better opportunities elsewhere, well good luck to him.”

It is now believed that the second sentence of this statement recently began to supersede the first as Leinster resigned themselves to McGrath’s desire to move in an effort to re-energise his career.

But there is still a lingering mood of disappointment in Leinster that their strength in player production is being offset by the weakness of others.

“We’re aware of other teams close to here ringing up young players and selling them stories about what they are going to get somewhere else,” he said then. “We know that that’s there, the club is very aware of it and what we can do about it is limited.”

In this case, it is believed that McGrath’s nose was the first to lead him towards a change of scenery.

McGrath’s form has dipped since starring on the 2017 Lions tour and he has fallen behind a resurgent Cian Healy in the pecking order, as well as Ed Byrne, who was once again preferred to him last weekend in the Champions Cup quarter-final clash, ironically against Ulster.

Form and injuries have hindered the Dubliner’s efforts to reclaim his former eminence. Nucifora was keen to advance the national cause when confirming the transfer, even if his words will be received caustically by Leinster faithful.

“Jack has made a very tough decision which he believes will advance his case for selection for Ireland,” said the Australian. “You have to respect a player with such ambition.

“Leinster is a fantastic environment but it is testament to the work that all four provinces are doing that players are seeking opportunities within Ireland to advance their international careers.”

McGrath is still determined to pitch for a World Cup berth in the summer friendlies but outlined his desire towards securing a more sustained renaissance when explaining his decision.

“This was a difficult decision but one I believe will put me in the best position to continue to perform at the top end of the game,” says McGrath, who will be hoping to impress in this summer’s World Cup warm-ups.

“I have enjoyed a huge amount of success at Leinster, but I feel that looking beyond the World Cup to the next phase of my career, I will benefit from the opportunity within the Ulster environment.”

Meanwhile, Irish captain Rory Best, whose IRFU contract runs out after the World Cup, will begin discussions with Ulster staff this week to discuss the possibility of him remaining on their books until next summer.

“They’ll have to find the money for me if I stay, but with the hookers with they have, they’re happy,” says Best, who also confirmed he hopes to return from an ankle injury next month

“It’s not as if they’re going to go out and sign a replacement for me. I’d like to make my mind up. I’ll know, fairly certainly, in the next week or two what I’m doing.

“The romance is to know when your last game is for a province you’ve been with for so long.” 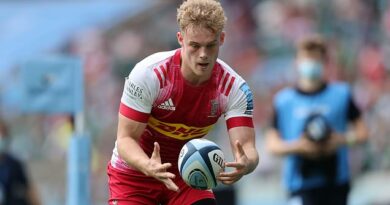 England could miss out on Harlequins starlet Louis Lynagh