Australia, who have dominated the sevens circuit all year, completed a unique “triple crown” of international triumphs with their 24-22 victory on Sunday (Monday morning AEST), adding the World Cup to their Commonwealth Games and world series titles. 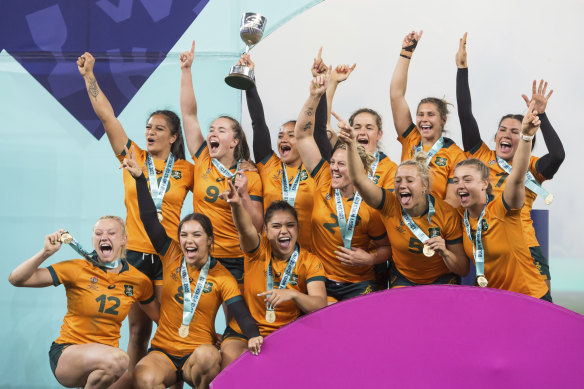 But the Australian men’s team missed out on the medals, finishing fourth after losing their championship bronze final 19-14 to Ireland, having earlier been beaten 38-14 by six-try Fiji, who went on to win the title with a 29-12 victory over New Zealand.

It’s the first time since the inaugural women’s World Cup in 2009 that the Australians have won the biggest non-Olympic sevens prize – and they had to overcome a thunderous late comeback from the reigning champions to prevail.

They only sealed their hard-earned win when New Zealander Tenika Willison missed a straightforward, post-hooter conversion attempt, which would have levelled the scores at 24 each.

Her error left the Australians celebrating wildly at Cape Town Stadium, with their outstanding co-captain Charlotte Caslick declaring: “What we’ve achieved this year has been pretty awesome. 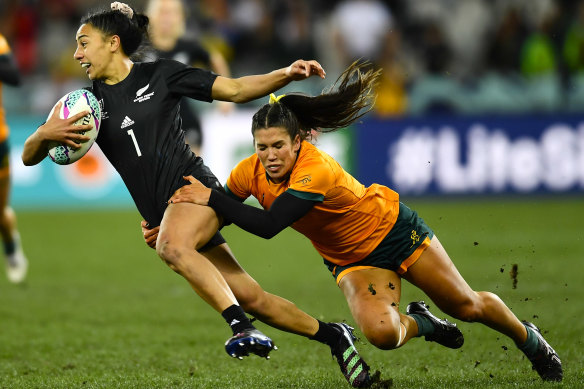 “We spoke about the ’09 girls today and doing it for them. Hopefully, in three or four cycles, girls will be talking about us and what we achieved this year. The legacy of this Australian women’s sevens [side] is pretty f—ing awesome!”

It was a tremendous final, with the two 2016 Olympic-winning warriors Caslick and 34-year-old Sharni Williams inspirational. Maddison Levi roared over for a hat-trick of tries on the right wing while speedster Faith Nathan went over for a tournament-leading eighth score.

Australia were the better team but the match showcased the familiar never-say-die spirit of New Zealand rugby as the Olympic champions fought back from 24-10 down with just over two minutes left. 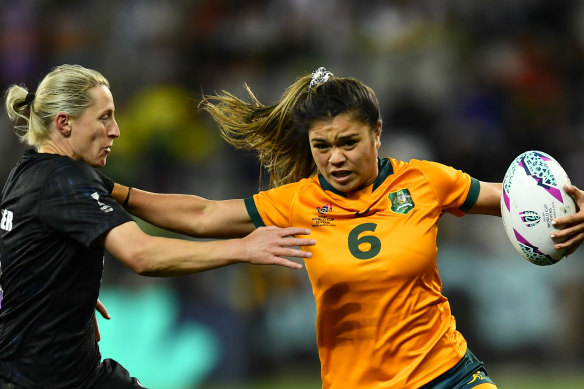 It followed up Nathan’s early second-half score as New Zealand paid a heavy penalty, giving up two tries while Niall Williams was in the sin bin for backchat.

But when Shiray Kaka scored and then Alena Saili went over with the final desperate move of a match already in its second minute of added time, it was all down to Willison’s nerve.

But from not too far wide out, she mis-hit the conversion that would have taken the match into extra time – and looked a picture of misery.

Earlier, the Australians beat USA 17-7 in the semi-finals, with Caslick, who had also orchestrated the quarter-final 35-5 victory over England on Saturday, again instrumental in a much more testing affair, nabbing two tries before Alysia Lefau-Fakaosilea scored the clincher.

But the chances of an Aussie World Cup double were extinguished almost as soon as the irrepressible Fijians had swept into a 12-0 lead in the first five minutes in the men’s semi-final. A couple of tries from Nick Malouf and Josh Turner weren’t enough for Australia.

Then in the bronze match, though scores for Nathan Lawson and Corey Toole looked set to send the Aussies to victory, Ireland fought back from 14-7 down to snatch the medal.

Watch every match of The Rugby Championship on the Home of Rugby, Stan Sport. All matches streaming ad-free, live and on demand on Stan Sport. 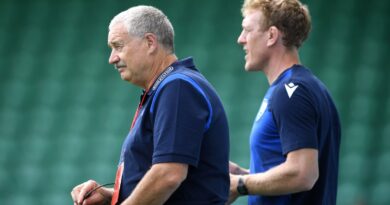