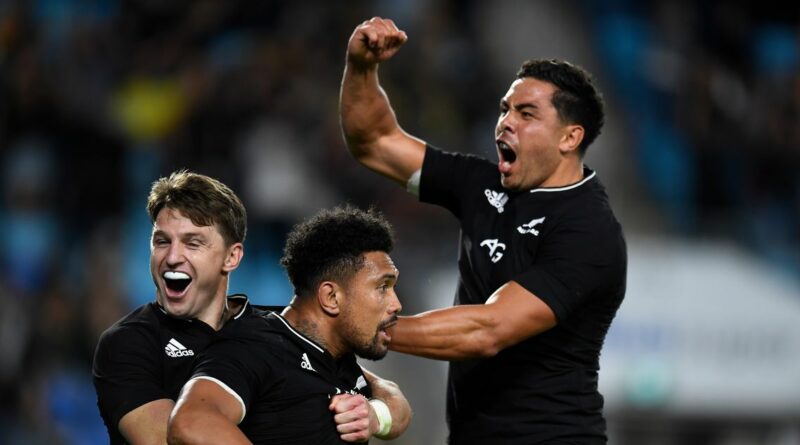 A well-rested New Zealand will face Ireland in Dublin on Saturday after head coach Ian Foster changed all but one of his starting XV following a dominant win over Italy.

The All Blacks followed up their 54-16 walloping of Wales with a 47-9 victory against the Azzurri, with the world's top-ranked team hoping to extend their autumn winning streak at the Aviva Stadium.

Beauden Barrett has been restored in the No. 10 jersey and will partner TJ Perenara in the half-back roles, with Finlay Christie set to cover the latter from the bench.

Saturday's game has come too soon for Aaron Smith to be involved despite joining the camp as injury cover this week, with Brad Weber a doubt for the rest of the tour following a head injury against Italy.

Winger Sevu Reece is the only name on the team sheet retained from that victory in Rome, while Will Jordan lines up on the opposite flank and Jordie Barrett moves back in at full-back.

Anton Lienert-Brown and Rieko Ioane will revive their dangerous combination in midfield, which will be key as New Zealand hope to stop an Ireland team that decimated Japan 60-5 last Saturday.

Sam Whitelock captains the All Blacks facing the same team against whom he made his debut back in 2010, when he scored twice during his 30-minute cameo off the bench.

In fact, three of Whitelock's six New Zealand tries have come against the Boys in Green, who have made this fixture more competitive in recent years and won two of their past four meetings.

He'll partner Brodie Retallick at lock while Ardie Savea reclaims the No. 8 shirt in between flankers Dalton Papalii and Ethan Blackadder.

The front-row wrecking crew of Nepo Laulala, Codie Taylor and Joe Moody has also been restored, while hooker Dane Coles is a bench option after scoring twice in the win against Italy.

What do you think is the biggest surprise in New Zealand's selection to face Ireland? Let us know in the comments section.

“We’ve watched Ireland’s development this year with interest, particularly through the latter part of the Six Nations and last week’s big win over Japan," Foster said. "They are certainly playing with confidence and ambition and represent a formidable challenge.

“We have no doubt what Saturday is going to bring at a full Aviva Stadium. It’s a big occasion, rugby is back to Dublin in terms of full grandstands, so we know what it’s going to mean here, and we want that kind of stage. It’s big and it’s exciting and is what motivates this team.”

Andy Farrell's hosts ran in nine tries against the Brave Blossoms in their autumn opener but face a far more difficult task in their bid to become just the second team to defeat New Zealand thus far in 2021.