‘We can’t take for granted that we’re going to just keep winning’: Beauden Barrett wary of Australia threat as All Blacks gear up for Bledisloe Cup clash in Japan

New Zealand fly-half Beauden Barrett on Tuesday warned of an Australian backlash when the fierce rivals clash in the Bledisloe Cup in Japan this weekend.

The All Blacks, who have won the last two Rugby World Cups, will be looking to complete a 3-0 whitewash in the annual series in Saturday’s Test in Yokohama.

And Barrett and his team-mates stepped off the team bus in Tokyo on Tuesday as they bid to put in final preparations for the clash against the Wallabies. 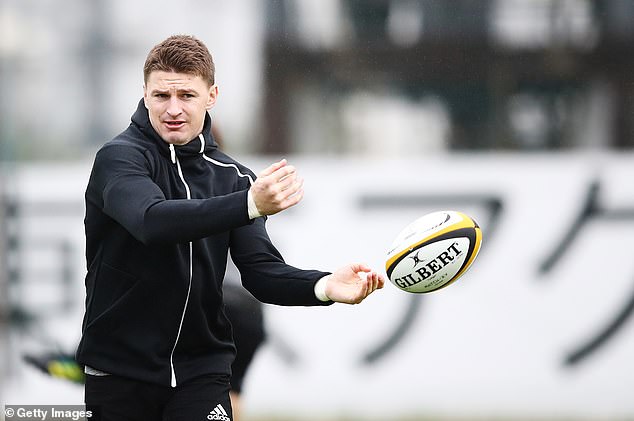 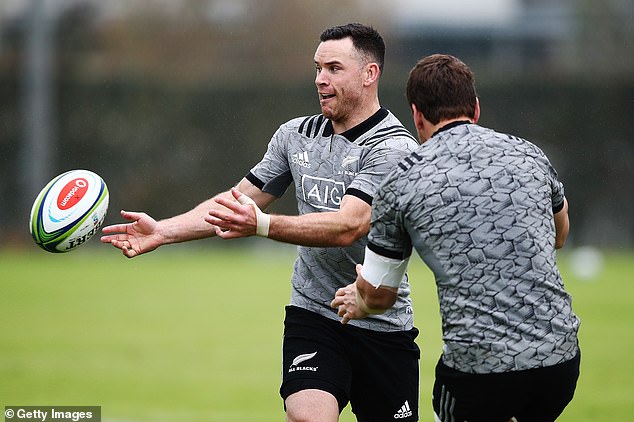 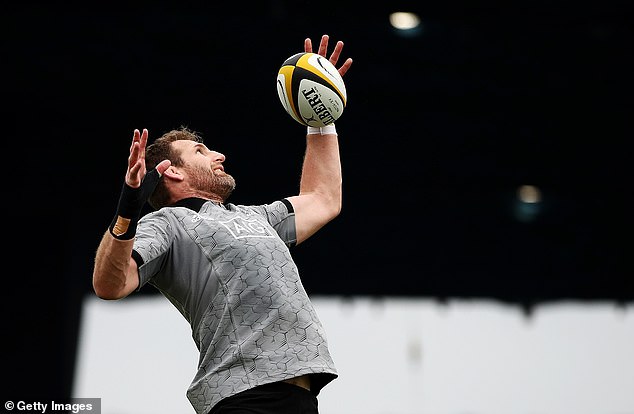 Captain Kieran Read runs through lineout drills with his pack in Tokyo, Japan 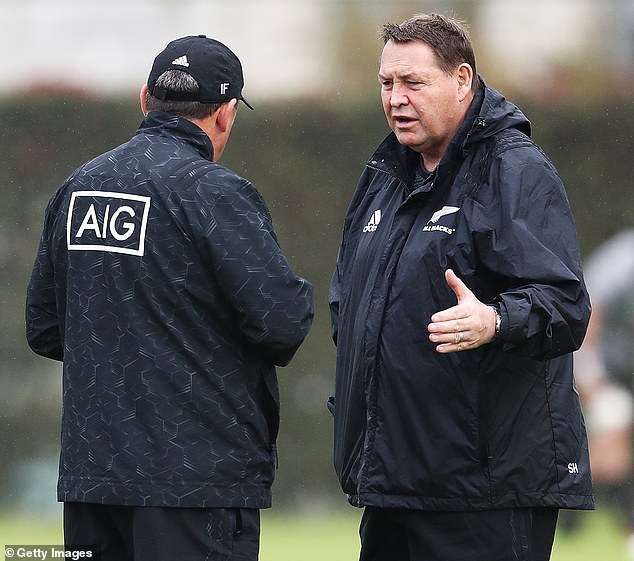 Steve Hansen and assistant coach Ian Foster put the All Blacks through their paces and left no stone unturned in their preparations to face their foes this weekend.

They will know they must be on their game at the Nissan Stadium to avoid a resurgent Australia side, who, Barrett highlighted, produced a stunning fightback against Argentina in their last outing – when they wiped out a 24-point half-time deficit to win 45-34.

And the fly-half believes this is evidence the Wallabies have turned the corner after losing six of their eight previous Tests.

‘We always get a confident Australia, there’s no doubt about that,’ the two-time world player of the year told reporters.

‘They’ve probably rediscovered that bit of belief that may have been missing. It was a great comeback, we acknowledge that – we weren’t surprised to see them come back.

‘We can’t take for granted that we’re going to just keep winning,’ added Barrett, who is set to win his 70th cap at the weekend.

‘There’s no secret recipe – we just have to keep working hard. We have high standards and we have to be accountable. It’s a serious business.’ 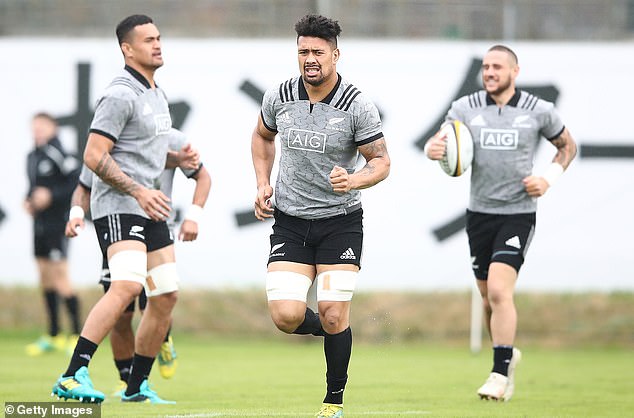 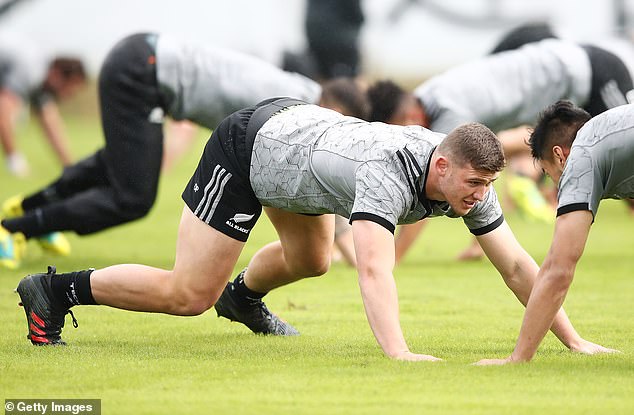 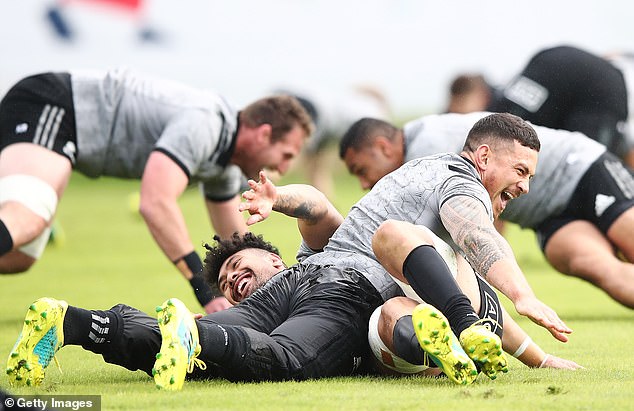 ‘It’s a similar situation,’ he said. ‘Last year was a huge learning curve for us, but they came out swinging harder and deserved their win.’

New Zealand face the 2019 World Cup hosts Japan in Tokyo on November 3 before flying to Europe to complete their five-match tour against England, Ireland and Italy. 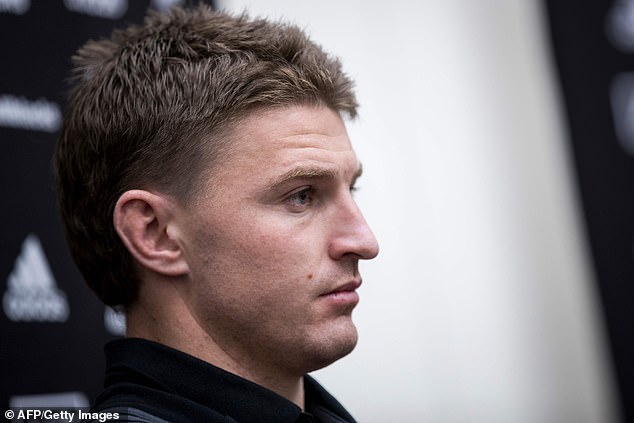 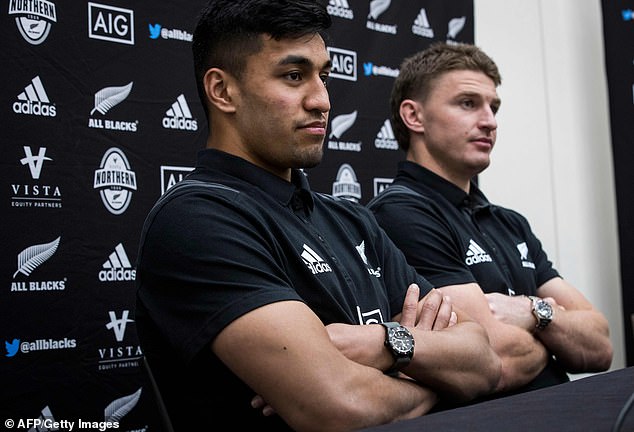 Rieko Ioane (left), however, warned Australia could bite back in the last Test like last year

Assistant coach Ian Foster, however, refused to look beyond their trans-Tasman rivals.

‘The (Bledisloe) trophy is already in the cabinet,’ he said.

‘But it’s a typical Test against Australia and the beauty of this one is that it’s Test one of a tour, so it’s important we start well.

‘We really don’t want to have to rebound from a poor performance in game one.’

Foster insisted the All Blacks would come out firing after beating Argentina twice in the Rugby Championship and splitting a brutal pair of games with South Africa after extending their 15-year stranglehold on the Bledisloe Cup.

‘I don’t think we’re ever pleased,’ he said. ‘We’re a grumpy bunch in some ways, but overall we’re in an okay spot.

‘We’ve come off a pretty tough Rugby Championship, we got really challenged by South Africa and we can still get better and smoother in some areas.’ 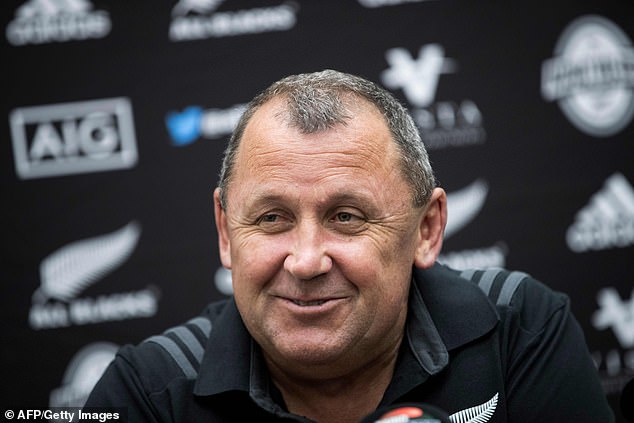 ‘We really don’t want to have to rebound from a poor performance,’ said assistant Foster

Australia will also play November Tests away to Wales, Italy and England.

Centre Samu Kerevi, who is set to make his return from a bicep injury, backed the Wallabies to push the World Cup holders all the way.

‘You always want to play the best in the world and right now they are the best — period,’ he said.

‘But for us it’s about making sure we’re prepared and have ticked off all the boxes to get the best outcome. The World Cup is not too far away, so hopefully it’s a rehearsal.’