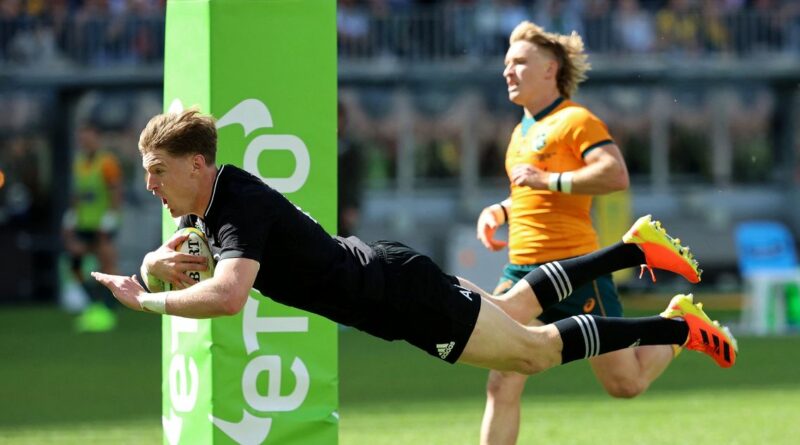 Rugby league fans the world over will be drooling at the prospect of Jordie Barrett joining their ranks after the New Zealand full-back admitted he'd be open to a change of code.

The youngest of the five Barrett brothers is a firm fixture in Ian Foster's All Blacks team and is playing at union 's elite level, having only recently completed a hectic international schedule.

Domestically, the 24-year-old has represented the Hurricanes in Super Rugby since 2017, while he plays his provincial rugby for Taranaki.

He earned his senior New Zealand debut in the same year and has only become a more integral figure for the three-time world champions.

Despite reaching the top level of his field so early on in his career, Barrett has admitted his admiration for rugby league and a desire to test the waters himself in future.

Speaking to former Hurricanes team-mate James Marshall on his 'What a Lad' podcast, Barrett confessed to getting itchy feet whenever he watches league between campaigns.

“To be honest, every off-season or every time I’m sitting there watching a rugby league game, I think, s**t I’d love to go over there and play some league just for a season," he said.

“And who knows, I might. It crosses my mind a lot.

“I’m not sure what position I’d play, but I’d love to go over there and give it a crack, who knows.”

Barrett has followed siblings Beauden and Scott in becoming a success on the Test stage, but he could set himself apart from the family by taking his talents to league.

There are certain traits in his game that would surely lend themselves well to the 13-a-side game, not least of which a thunderous boot and considerable stature.

Do you think New Zealand will lift the Rugby World Cup a record fourth time in 2023? Let us know in the comments section.

Marshall, 33, mentioned Manly Warringah Sea Eagles full-back Tom Trbojevic as a potential asset for Barrett to model his game around, but the latter hinted at a position swap if he did move.

“I wouldn’t be able to tie his [Trbojevic's] shoelaces, but maybe five-eighth. I wouldn’t mind kicking the skin a few times on fourth and fifth tackle, or putting up some floater bombs,” Barrett added.

“Defending in the front line too, you’re allowed to be a grub in that game so I’d love it.”

New Zealand Rugby have been known to make sabbatical exceptions for certain star players who want to take time away from Super Rugby duty in the past.

Even as recently as 2021, Beauden Barrett spent a season away for a lucrative five-month stint with Tokyo Sungoliath in Japan.

However, Jordie's hopes of a temporary shift outside union altogether would likely come with a lot more red tape.

All Blacks great Sonny Bill Williams set an example for New Zealand players testing their talents in both codes, winning some of the highest honours in both trades during his career.

A love of league appears to be common in Wellington, too. Scrum-half TJ Perenara said last year that he was weighing up a potential code hop, while All Blacks back-rower Ardie Savea more recently voiced his interest.

Barrett's current contract with New Zealand Rugby and the Hurricanes is due to expire in 2022, although the All Blacks will surely bank on their star playing at the 2023 Rugby World Cup in France.