New Wallabies coach Dave Rennie has canned unpopular mid-season Wallabies camps and is casting around for a trial opponent in the lead-up to the Ireland series in July.

Rennie is back in Scotland coaching Glasgow Warriors in the Pro14 but has been hard at work mapping out his first season at the helm of Australia. The Wallabies open the international season with two Tests against Ireland and a Test against Fiji, most likely in Townsville. 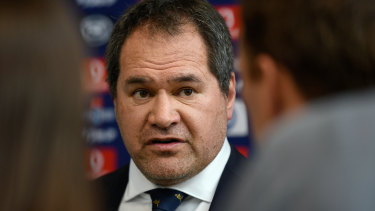 Dave Rennie has done away with Wallabies camps this year. Credit:AAP

The Kiwi wants his Wallabies squad to play a high-quality opponent about 10 days out from their first Test in Brisbane on July 4, a request that has his staff furiously trying to pinpoint the right team.

Depending on how Glasgow fare over the next two months of competition, Rennie could arrive as late as the end of June. The Warriors' five-from-10 record at this point suggest a spot in the final two appears unlikely, but Johnson and manager Chris Webb are live to the possibility that, should that occur, the Wallabies coach would not arrive in Brisbane until the Monday of the first Test week.

With early season indications suggesting Australia could have just one team in the Super Rugby finals, Rugby Australia could be in the unusual position of having 75 per cent of a Wallabies squad assembled by June 1 but no head coach to work with them.

Rennie has also decided to leave the Australian Super Rugby franchises free to see out their seasons with a minimum of intervention from the Wallabies, with no mid-season camps or gatherings.

The often controversial camps were a source of tension in recent years, with a 2019 fitness camp leading to injuries in a number of players.

Helping make the decision was the fact Rugby Australia, with coaching staff in flux, missed the end-of-year deadline to notify the Super Rugby sides of any proposed camps they wanted to put in the diary.

But Rennie and director of rugby Scott Johnson decided not to push the point, taking the view Super Rugby success would benefit the Wallabies more than mid-season camps.

An extended group will be called together at various points to knock over commercial duties, such as sponsors' media requirements and team photography.

But there will be no week-long fitness camps, with Rennie opting to rely on sending out his assistant coaches to spend time in the Super Rugby environments.

Scott Wisemantel (attack) and Matt Taylor (defence) have already been doing the rounds, spending considerable time with the Rebels and also dropping into the Waratahs last week.

"It's been good, Wisey's come down a couple of times, I've had a couple of meetings with him, they're around all the time, touching base," Whitaker said. "They're mainly getting around to see how we do things. The problem they've got is limited preparation. They're probably wanting to see what we're doing, watch some of our games, pick the eyes out of it and tell us where we can get better. It's a group way of getting better, which is good."

Rennie visited the Rebels, Brumbies, Reds and Waratahs on his 10-day tour here in January, meeting playing groups but also making it clear he considered the Wallabies existed to help the Super Rugby sides in the January to June window.

Meanwhile, the search continues for a forwards coach, with indications looking like RA will opt for a two-person model of set piece specialist and general forwards coach. 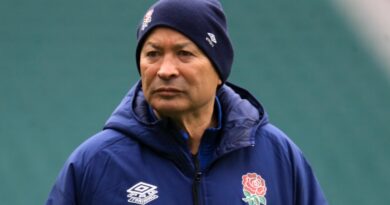