Mario Ledesma’s Pumas pulled the wool over our eyes last weekend – or at least exposed our collective ignorance.

We all reasoned that Argentina would be undercooked – after all, how can you be ready for the All Blacks when you haven’t played any rugby for 1000 years? 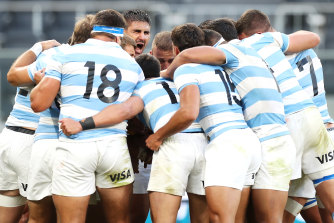 Captain Pablo Matera is one of several Pumas plying his trade in Europe.Credit:Getty

It was a great theory, but unfortunately the underlying premise just wasn’t true.

Why? Pablo Matera, Marcos Kremer, Matias Alemanno, Guido Petti and Nicolas Sanchez – the literal and figurative giants from the Bankwest heist – have been playing since September in the attritional Top 14 or England’s Premiership.

In fact, Matera and Kremer have been playing in the same back row at Stade Francais. No wonder they looked in sync as they constantly drove into All Blacks ball carriers for 80 minutes.

And when Stade started their Top 14 campaign with a victory away to Castres on September 13, Sanchez was pulling the strings from No.10 with countryman Benjamin Urdapilletta (who didn’t make the Tri Nations squad) standing opposite him in the home side’s playmaking role. 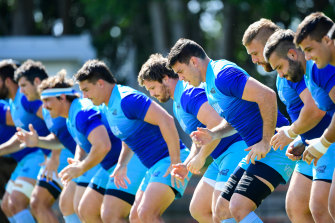 It could be a glimpse into a better future for Pumas rugby, and a reminder that the Jaguares’ forced exclusion from Super Rugby may actually help the Test team.

For all the excitement that greeted the Jaguares’ entrance into Super Rugby, it has not aided the Pumas and Ledesma hinted at why that has been the case after the win against the All Blacks.

Ledesma said the Pumas had stopped trying to be something they weren’t. Perhaps Super Rugby had conned them into trying to play like New Zealanders, when really they play more like the French.

So, guess where last week’s tighthead Francisco Gomez Kodela has been playing in recent months? In France, alongside Izack Rodda and Colby Fainga’a at Lyon. 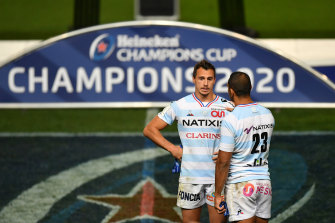 Pumas No.11 Juan Imhoff has also been in action in France (alongside Kurtley Beale at Racing), as have impact players Facundo Isa (Toulon) and Santiaga Cordero (Bordeaux).

Argentina have made enormous sacrifices to get to Australia, but don’t be fooled by social media videos into thinking they have been training in apartments, garages and hotel conference rooms for the past eight months.

Their success in beating the All Blacks also brings into question the Springboks’ non-participation.
You don’t need to read between the lines too much to know that Rugby Australia’s top brass were miffed at South Africa’s late withdrawal. Comments by Rob Clarke and Hamish McLennan suggested the Boks kept shifting the goalposts and were looking for a way out.

Player welfare and the complexities of putting together their squad from different parts of the world were offered as excuses, but such considerations didn’t seem to affect the Pumas.

'The Rugby Championship/Tri Nations has turned out to be pleasantly entertaining and unpredictable.'

In fact, with so many South Africans playing in Europe you could argue that the Springboks would have been at least as well prepared as the Argentines.

So, we are entitled to take a slightly more cynical view and suggest the Springboks might have been engaging in a bit of reputation management. Why? If you look at what has happened to their top-line players in Europe in recent months, it is a tale of COVID-19, injuries and woe.

Just this week, Springboks halfback Faf de Klerk revealed that he suffered from a serious case of coronavirus as the disease swept through his Sale squad in the UK.

Prior to that, Springboks No.10 Handre Pollard (Montpellier) did his ACL, while Rugby World Cup 'Bomb Squad' behemoths Lood de Jager (Sale) and RG Snyman (Munster) are also busted, with de Jager suffering another shoulder injury while Snyman did his ACL on debut for the Irish province in August.

Could it be that South Africa, who are still basking in the glory of their Rugby World Cup win and reliving it through the Chasing the Sun documentary, took a look at these unexpected omissions and decided The Rugby Championship was looking less and less appealing by the minute?

The decision has cost the SANZAAR partners millions but is also South Africa’s loss. While the Autumn Nations tournament up north started in functional fashion last weekend and appears to include at least three ordinary sides (Wales, Scotland and Italy), the Rugby Championship/Tri Nations has turned out to be pleasantly entertaining and unpredictable.

Put that down to the Pumas – but just don’t call them underdone.

B. Vunipola reveals why he didn't take a knee to support BLM movement