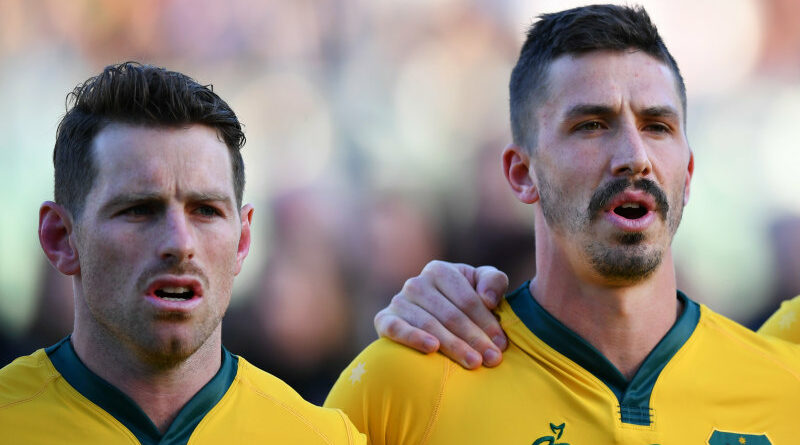 Wallabies coach Dave Rennie has sprung a number of surprises ahead of Thursday’s Bledisloe Cup opener by dropping halfback Nic White, hooker Folau Fainga’a and No.7 Fraser McReight back to the bench after Australia’s dismal 16-point loss to South Africa earlier this month.

There was bad news on the injury front, with Noah Lolesio (concussion), Hunter Paisami (concussion) and Taniela Tupou (calf) all ruled out for the first of two matches against the Kiwis.

In addition to the bold inclusion of Bernard Foley, as reported earlier on Tuesday, Rennie has made eight changes to his run-on side after a 24-8 loss to South Africa in Sydney.

White, a regular in the starting team, makes way for Jake Gordon, who is set to start in his first Test of 2022.

Gordon will rekindle his Waratahs halves partnership with Foley, who will play his first Wallabies Test since 2019.

Fainga’a has made way for Dave Porecki at hooker, while Pete Samu fills the No.7 spot ahead of McReight, who has been named on a 5-3 bench. 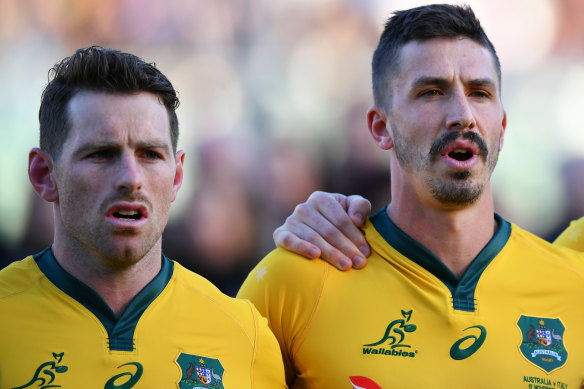 Bernard Foley and Jake Gordon will renew their Waratahs halves partnership in the Bledisloe Cup opener.Credit:Getty

Jed Holloway will play in the second row alongside Matt Philip, with Rob Leota named at No.6.

Paisami and Lolesio did not pass the necessary tests required to play after picking up head knocks in the latest Springboks match.

Tupou, who injured his calf while warming up in the last Test, has not been named in the 23 in a big blow for the Wallabies.

In the backs, Lalakai Foketi has earned a start at No.12, while Andrew Kellaway replaces Reece Hodge at fullback.

“It’s great to have Bernard’s experience and he brings plenty of voice and passion for the gold jersey,” Rennie said in a statement.

“New Zealand showed their class in a massive win over Argentina last week and will come to Melbourne full of confidence.

“We’re well aware of the opportunity in front of us over the next fortnight and we’re extremely motivated to make the most of it.”

Meanwhile, the All Blacks have named a strong team that sees Brodie Retallick return to the starting side.

Retallick, who has posed a problem for the Wallabies in years gone by, will link up with his long-term second-row partner Sam Whitelock.

Led by captain Sam Cane, the All Blacks have gone with Scott Barrett at No.6, with Hoskins Sotutu named in the No.8 jersey.

Richie Mo’unga has been named at No.10, which keeps Beauden Barrett on the bench.

New Zealand are full of confidence after their 53-3 thumping of Argentina but have had a difficult year that almost saw coach Ian Foster sacked. The team lost six of eight Tests before their latest victory, including a home series defeat to Ireland.

“We can’t wait to kick off what should be a fantastic Test, which doubles as the opening Bledisloe Cup clash of the year,” Foster said in a statement. “We are incredibly driven to keep hold of this trophy which means so much to both countries.

“And when you factor in how tight this year’s Rugby Championship is, all signs point towards another great Test match here in Melbourne.”

Australia are second on the Rugby Championship ladder, behind New Zealand and South Africa.

The Wallabies have won three of their past 20 Tests against New Zealand since 2015.

Watch every match of The Rugby Championship and Bledisloe Cup on the Home of Rugby, Stan Sport. Returns for the Wallabies v All Blacks in the Bledisloe Cup this Thursday from 7pm AEST. All matches streaming ad-free, live and on demand on Stan Sport.

WOODWARD: Premiership Rugby bosses are making it up on the hoof