Ireland will arrive back in Dublin this morning and the page will immediately turn when the squad reach Carton House.

How much Joe Schmidt will have learned from such a facile win over a poor second-string Italy team remains to be seen, but he will at least be glad to have come through the game in Chicago without any fresh injury headaches. Rob Kearney is the biggest concern ahead of Argentina on Saturday as the full-back struggles to overcome a shoulder injury.

The 32-year old is not expected to take part in Ireland’s first pitch session tomorrow, which under Schmidt’s watch, is generally an indication that a player will not feature in the coming weekend.

Schmidt confirmed that Peter O’Mahony took a full part in training last week as he overcame his own shoulder problem.

“Peter’s fine and trained fully during the week,” he said following Ireland’s win at Soldier Field. “Rob, I think he probably will struggle to make Tuesday’s training which might mean that Saturday might be too soon for him. He’ll be straight into camp and I’ll catch up with him then and so will the medics and we’ll make a decision on the back of that.”

If Kearney does miss the game against the Pumas, Schmidt’s headache will be eased by Jordan Larmour’s scintillating form as he lit up a dull contest by scoring a truly memorable hat-trick.

The 21-year old, who started against Italy at full-back, brings something different to Ireland’s attack and while he might not be as positionally or defensively strong as Kearney, Larmour’s footwork is up there with the best of the world.

When Will Addison was introduced from the bench for his international debut along with Ross Byrne, Larmour switched to the left wing where he was just as devastating and scored two tries. It was a stunning hat-trick made all the more special because it came on what was Larmour’s first international start and on a cabbage patch pitch.

Having made such a blistering start, Ireland got dragged down to Italy’s level in what became a poor, stop-start first half that was littered with sloppy errors.

As a half-back pair, Luke McGrath and Joey Carbery struggled to exert much control or tempo with both making a couple of uncharacteristic mistakes.

They improved significantly in the second half, and given that Schmidt wanted them to lead the team this week, making mistakes in an environment like that is the only way they are going to learn for the tougher tasks ahead. “I think it’s really hard for halves to inject tempo onto the game if the ball is slow and big pileups are happening and they’re physical defensively,” Schmidt insisted.

“I thought they played really well. If anything, (we) maybe (played) a bit conservatively in the first half.

“There were times when they could have tried to open the game up a little bit and we took the more conservative options but those are things that they will look back on and keep learning.

“That’s why they’re were given the opportunity. That’s exactly what we want them to do.”

Carbery was flawless from the tee, kicking five from five conversions as Ireland ran in eight tries in total, including a brace from the outstanding Tadhg Beirne on his first start, and kept Italy scoreless in the second half.

“He’s a kid that learns well and works hard,” Schmidt said of Carbery. “Certainly that (intercepted) wide pass, it never looked really like it was on. While we had some numbers there I think we were never going to get the space on the edge.

“Even if he didn’t pick the pass off he would have probably hit Jacob (Stockdale) into touch if he’d gone for the man instead. He’ll look back on that and build something else into his game.

“Joey didn’t run today and so I just felt he was trying really hard to bring everyone else into the game and one of the strengths of Joey’s game is bringing himself to the fore. So, I hope he gets a bit of confidence from what he did today and mixes that up a little bit.”

Argentina will pose much more of a threat and Schmidt will be hoping that his delayed arrival in Chicago to instead remain with the bulk of the starters for the game at the Aviva will pay off.

“I really think they are coming fully loaded, fully fresh. I think you are going to get two teams going toe-to-toe at a pretty high level.” 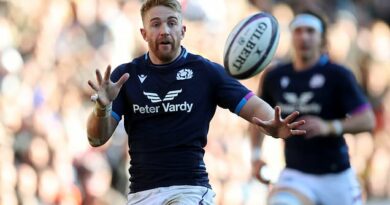