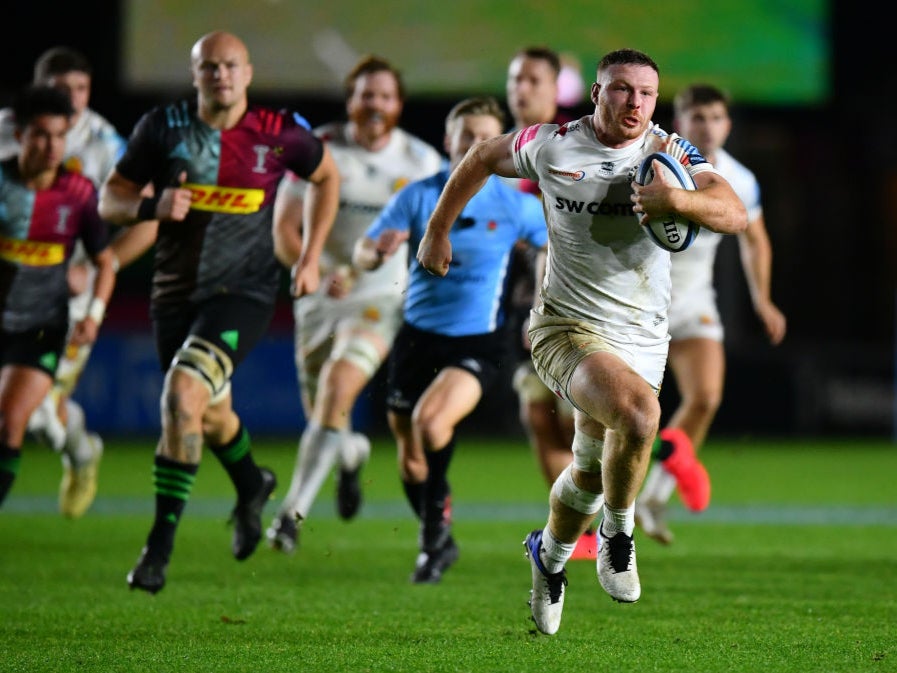 Simmonds finished his opening score from nearly 50m out

It did not take long after the restart for the lead to grow, with Ewers scoring a more conventional Exeter try. With a penalty sent to touch just short of the Harlequins five-metre line, the home side’s maul defence went missing to allow Ewers to take the lineout and charge through without facing any real resistance.

Joe Simmonds this time missed the conversion to leave Harlequins hope of a fightback, and it very nearly came immediately. Smith and Alex Dombrandt combined perfectly to allow the latter to collect a delicate chip over the defensive line, and the powerful forward immediately hacked on again for himself and Danny Care to chase. Tom O’Flaherty was able to gather first but the defence trapped Exeter in their 22, and turnover ball allowed Harlequins to attack. With Exeter scrambling, Care put centre Luke Northmore through to score, but the gap was only there as Dombrandt had charged through in front of him and referee Christophe Ridley correctly ruled it out for crossing.

Harlequins had grown into the contest though with a series of penalty in a row and the way they went hammer and tongs at the Chiefs, something was going to give. It took an excellent tap-tackle from Scott Baldwin to prevent an Exeter try after Ian Whitten broke through Smith’s attempted tackle with O’Flaherty outside him. 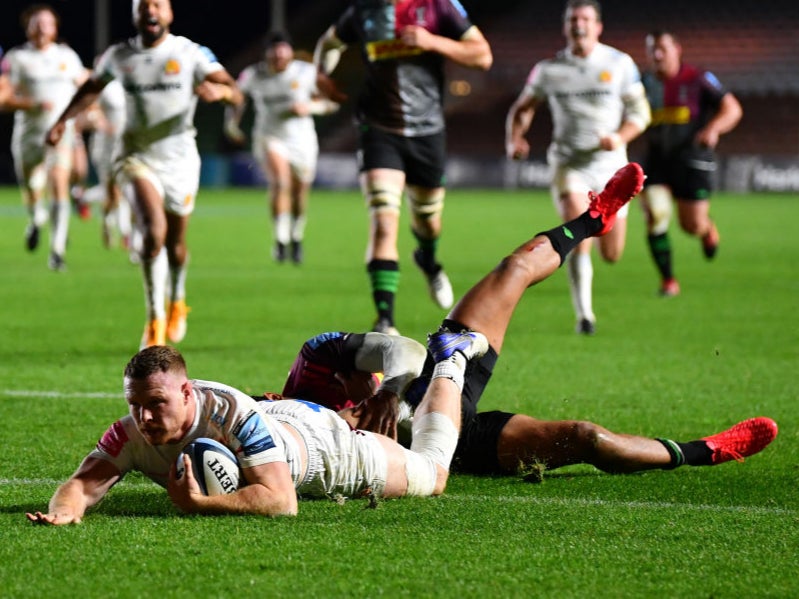 But the pressure started to shift back onto the hosts. Care conceded a penalty for taking out the scrum-half before captain Stephen Lewies did likewise by catching O’Flaherty high, but it proved third time lucky as a scrum infringement from replacement Jordan Els gave Exeter the five-metre lineout for Sam Simmonds to score his second. With just five minutes left on the clock, the Exeter pack delivered the same again to gift Simmonds his hat-trick to seal a hard-fought bonus points, and having done the eye-catching stuff early on, Simmonds proved he can do it ugly too.

Six Nations 2020 team of the tournament (so far)

Pulisic boost for Chelsea as forward set to return

Liverpool fans call for Takumi Minamino new role after outrageous training goal
We and our partners use cookies on this site to improve our service, perform analytics, personalize advertising, measure advertising performance, and remember website preferences.Ok