Steamrolling Australian centre Samu Kerevi and back-rower Sean McMahon are among a raft of high-profile rugby stars lining up for a potential crack at Australia's men's Olympic sevens team.

Little more than a month after Japan based-Kerevi played his last Test in the Wallabies jersey, the Herald can reveal the Australian vice captain is contemplating a sensational side-step into sevens ahead of the Tokyo Olympics next year. 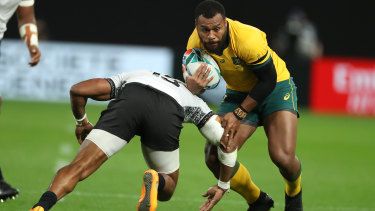 Shock switch? Samu Kerevi could be contemplating a crack at sevens. Credit:Getty

Unlike McMahon, Kerevi has never played sevens at a professional level. But after growing up in Fiji, the spiritual home of sevens, and honing his tackle-busting offload game with the Reds and Wallabies, there is little doubt Kerevi possesses the skills to make the switch.

It is also no secret that men's coach Tim Walsh, who led the Aussie women to the inaugural sevens Olympic gold medal in Rio de Janeiro in 2016, is on the lookout for two or three players from the 15-player code to add the finishing touches to his Tokyo squad.

But whether Kerevi and McMahon have the time or commitment to make the switch is the question. 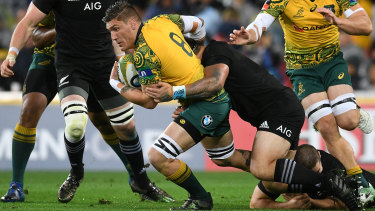 Sean McMahon is considering a switch back to sevens ahead of the Tokyo Olympics.Credit:AAP

Walsh confirmed that in the three weeks since Australia qualified for the Olympics, he and his staff had been peppered with interest from player managers keen to explore a sevens spell for their clients.

Rebels and Wallabies back Jack Maddocks is dipping his toes in, toggling between Walsh's squad and Melbourne, in a similar vein to Waratahs forward Michael Wells.

But Walsh also wants players who are prepared to go all in for the chance to wear the green and gold in a different format.

"With the team having qualified for Tokyo 2020 we have had discussions with managers about joining the Aussie sevens and going to the biggest sporting event in the world in the Olympics," Walsh said. "Any player would have to prove himself in the Aussie7s jersey and we look forward to continuing discussions with those who feel they can add value to our Olympic campaign."

The road to an Olympic sevens call-up is littered with cautionary tales.

Quade Cooper put his hand up for Rio and played two lead-in tournaments on the world series circuit but was cut two months out from the Olympics.

"As many players have found out throughout this season’s World Series, it is no easy task to transition from fifteens to the sevens form of the game," then-coach Andy Friend said at the time. 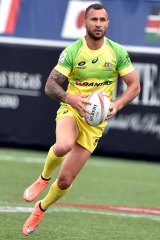 Quade Cooper started well in sevens but didn’t make the cut for Rio in 2016. Credit:David Becker

"There’s no doubt Quade is a quality player, but put simply, we just haven’t had the opportunity to work with him as much as we would have liked over the past five months. Each day I have a group of 20-plus players working on different structures and patterns of play and I don’t think we would have got the very best out of Quade had we just thrown him into a tournament with limited preparation – particularly for an event as momentous as the Olympics."

On the flip side, Sonny Bill Williams was one of the few players to make the switch, playing six tournaments in the lead up to Rio. Injury plagued him throughout the year and he ruptured his Achilles tendon in New Zealand's opening game against Japan.

If talks progress between Kerevi and McMahon and Rugby Australia, it is not clear how they will balance their Japanese commitments with the time Walsh wants them to devote to the sevens program.

Both also face stiff competition from within the squad, and not just from the likes of Maddocks. Sprint star Trae "Quadzilla" Williams has been impressing the coaching staff since his move from athletics earlier this year.

Walsh will name his squad for the first leg of the men's World Series on Friday.

Kyle Sinckler on his Rugby World Cup memories: ‘I remember England tearing it up in 2003 and I wanted to be Jason Robinson’