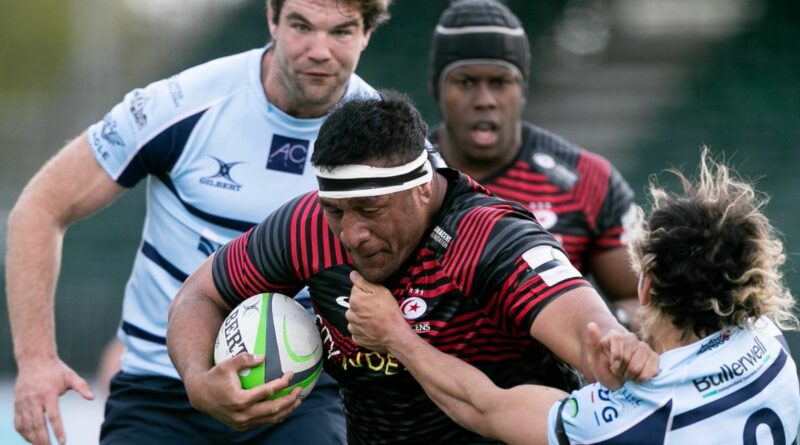 Mako Vunipola has reportedly rejected rumours suggesting he’s set to leave Saracens for a lucrative transfer to the Top 14 when his contract expires at the end of this season.

Both the loosehead prop and younger brother Billy will see their deals at StoneX Stadium run out in 2022, and top teams in France are understood to have the former on their radar.

The elder Vunipola sibling has won four Premiership titles with Saracens and recently returned from his third tour with the British and Irish Lions, playing all three Tests in a series defeat to South Africa.

Mako, 30, remained with the club following their 2020 relegation for breaching salary cap laws and featured for the club during their promotion campaign back from the RFU Championship.

It’s been speculated Vunipola’s £400,000 salary demands have put the brakes on an extension at Sarries and offered French clubs hope, but RugbyPass reported he’s dubbed those reports “not true.”

The 67-cap England international celebrated his decade anniversary with Saracens earlier this year, having joined the club from Bristol, where he made his professional debut in 2010.

Since then, Vunipola has consistently proved himself to be one of the best loosehead props in the northern hemisphere, having also helped Saracens win three European Rugby Champions Cups.

Saracens director Mark McCall was complimentary of the Vunipola brothers after the pair confirmed they’d remain with the club for their season in the second tier last year.

“The Vunipola family are an integral part of the Saracens story,” McCall said in a statement at the time.

“Mako is a hugely respected member of the squad who shows genuine care for his teammates. We are delighted he has committed his future here.”

It’s understandable teams in France may look to Vunipola as a potential recruit with his contract due date coming into view, just as Saracens make their return to the first tier.

It’s likely this season’s results upon their return will influence Vunipola’s plans for the future, with the prop seemingly settled in Barnet, where he and his brother each have young families.

Their 21-year-old cousin, Manu, is also coming through the ranks at Sarries, where the Vunipola family connection could prove too strong for their suitors to break down.

McCall’s side are favourites to reclaim the Premiership crown in their first season back at the top, with both Vunipola brothers set to play key roles in that effort.

Saracens are poised to open their 2021/22 Premiership campaign away to fellow title Bristol Bears on Friday, September 17.

Ibanez admits final IS a 'farce' after France name weakened side