Preparing for the future is a critical component for any sports organisation, but especially for one whose recent history is as sordid as that of Saracens.

The London powerhouse won five Premiership titles and three Champions Cups in nine seasons to cement their place as England's team of the 2010s, but the current decade hasn't been so kind.

Relegated from the top flight in early 2020 and fined £5.36million for multiple salary cap breaches over the course of three seasons, England's elite had become the butt of every Premiership joke almost overnight.

This was, after all, one of the biggest scandals to have ever affected rugby in the professional age, a flaunting of the rules on so wide a scale that it demanded a punishment to fit the crime.

Mark McCall's men made relatively light work of the Championship and hammered Ealing Trailfinders 117-15 in a two-legged final to regain Premiership status at the first time of asking.

They did so despite casting off numerous first-team regulars in order to meet even stricter salary restrictions, though many would be back provided Saracens were successful in their quest to return to the top tier.

Tough decisions were made in judging whom the club could afford to keep, with Australia lock Will Skelton, England counterpart George Kruis and Wales prop Rhys Carre each heading for the exit.

Vunipola brothers Billy and Mako—two of the players who benefited from business investments used to circumvent the salary cap—were among those who remained at the club for their Championship campaign.

Fellow England stars Owen Farrell, Maro Itoje, Jamie George and Elliot Daly also stayed on, though some of their involvements in the second division were minimal, for the most part.

The squad has been strengthened again by the returns of Ben Earl, Max Malins, Alex Lozowski, Alex Goode and Nick Isiekwe, some of those stars who left on a season's loan with faith their employers would rebound.

Do you think Saracens will win the Premiership title in their first season back? Let us know in the comments section.

Earl spoke highly of his time at Ashton Gate, but it's a sign of Saracens' intact allure that the England flanker never swayed in that desire to succeed for his parent club.

“I’ve nothing but good things to say about Bristol, the way they do things, the friends I made and the city itself," he said ahead of the 2021/22 season.

“I loved my time there. But that chapter for me is over and it’s all about repaying the faith and loyalty Sarries have shown in me."

One who won't return to StoneX Stadium in the same capacity, however, is former owner Nigel Wray, the figure at the heart of Saracens' fiscal failures.

It was through Wray that certain senior figures within the squad were paid via previously disguised channels.

It was during the Premiership's investigation that Wray stepped down from his duties as chairman, but he more recently sold the majority of his shares in a £32m deal.

The bulk of that funding would go into refurbishments, the training facility and developing the women's team, with a host of new faces lending their knowledge at board level.

This consortium—fronted by 1995 Rugby World Cup-winner Francois Pienaar and ex-England star Maggie Alphonsi—is where Saracens have a real chance at starting afresh.

Wray—who retains a minority stake in Saracens—will now be largely viewed as a symbol of their past, but a front office led more closely by former players poses more positive omens for what's to come.

Despite coming into their Premiership return as favourites for the title, the resurgence is unlikely to be instant, and there are few in English rugby circles who don't believe it's on the way.

For starters, Saracens will be absent from European competition for the second season running, although their peers may dread the thought of them having tunnel vision set on a sixth Premiership title.

It may ultimately work in their favour that both Vunipola brothers—as well as returning British and Irish Lions George and Daly—were recently left out of England's training squad ahead of the autumn internationals.

Eddie Jones retained much of that talent even during Saracens' Championship conquest, but their omission from international duty again serves to focus their efforts at club level.

The reborn Leicester Tigers struck late to hand McCall's side a maiden defeat this season in only their second outing, but it was a controversial call that preserved the Premiership leaders' unbeaten start.

That result reminded Saracens their route back to England's pinnacle won't be a simple one, but it encouraged to learn they can still stand with the nation's best, having dominated Bristol Bears 26-9 in Week 1.

Needless to say that season's sojourn in the Championship doesn't appear to have left any lasting marks on Saracens, who have served their time and are well on the way to rehabilitation.

Far from needing the rugby community's sympathy, however, the club has the facilities in place to come back bigger and better-equipped than before.

Following that opening-day win at Bristol, McCall sounded confident asserting Saracens would "get stronger as the year gets on," which is difficult to argue against considering Itoje is still yet to return.

But the England superstar is one piece of a much bigger (and very capable) organism, and provided Saracens have learnt their lessons off the field, there's little reason to believe they're far from more success on it. 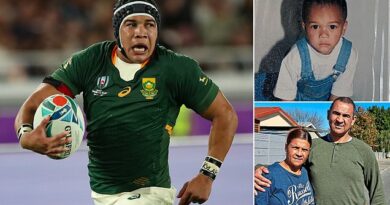