Tatafu Polota-Nau has been drafted into Australia’s squad for the Wallabies’ three-Test tour of Wales, Italy and England this month.

The Leicester hooker, who played his last Test against Argentina in September, will join up with the 32-man squad in Wales ahead of the November 10 Test at Millennium Stadium in Cardiff.

New South Wales Waratahs lock Jed Holloway and Queensland hooker Brandon Paenga-Amosa will return to Australia after training with Michael Cheika’s Wallabies at their World Cup base in Japan.

Cheika has also picked a pair of uncapped loose forwards to travel with the squad as development players in Fiji-born Melbourne Rebel Isi Naisarani and ACT Brumbies’ Rob Valetini.

“Naisarani will become eligible for Australia in April next year, and has already been touted as a future Wallaby backrower after several bruising displays in … Super Rugby and the National Rugby Championship,” the team said.

Following Wales, the Wallabies, who lost their last match 37-20 to the All Blacks in Yokohama last Saturday, wrap up their season with Tests against Italy in Padua and England at Twickenham, live on Sky Sports.

ANOTHER Six Nations may have to be played in November

‘If Queensland can do it, why can’t we?’: Clarke wants full stadium for Tri Nations decider 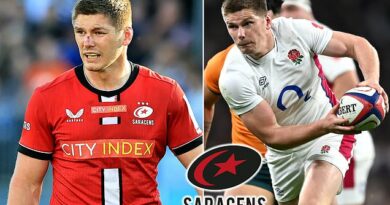