The Wallabies might cop the bitter taste of defeat in Bledisloe III on Saturday but the sweetener is that any worthy All Blacks performance will have its origins in the renewed level of respect between the sides.

The 'R' word has been missing in action between Rugby Australia and New Zealand Rugby in recent months but, without wanting to go over old ground, there is a different feeling at ground level where the actual Tests are won and lost. 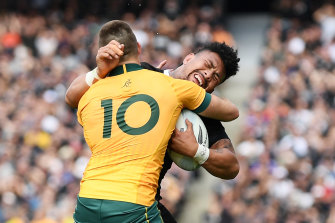 The Wallabies have done enough in the opening two Bledisloe clashes to force the All Blacks to look at themselves.Credit:Getty

That edge will be far more relevant in deciding the outcome of Saturday's Test than the selections on both sides. Even though there is inexperience dotted throughout the Wallabies' 23, they are easily good enough to beat the All Blacks if the visitors bring the collective lack of intensity they showed in Perth last year.

However, the Wallabies clearly poked enough holes in the All Blacks side for coaches Ian Foster and John Plumtree to take a good, honest look at their side and identify areas that need sharp improvement.

That's the message the All Blacks have been hammering all week, and it's a far cry from some of the triumphalism that sprang up from other quarters following the Wallabies' loss at Eden Park.

In fact, Foster – a mild-mannered man – was this week irked at a line of questioning from Kiwi journalists who suggested that it would be good to "tick off" the Bledisloe and then blood some new players for the rest of the Tri Nations. 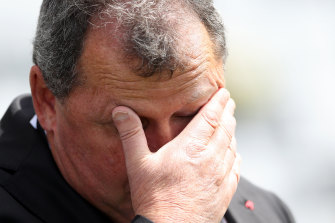 Ian Foster was not impressed with the complacency coming out of the New Zealand rugby media.Credit:Getty

Foster immediately pushed back at that suggestion and the implication that the Wallabies provided no serious threat.

Earlier in the week, Plumtree also had little time for the idea that the All Blacks had somehow restored the natural order of things with their victory in Auckland.

Instead, he rattled off the chances the Wallabies had missed and, significantly, namechecked Wisemantel as well as Rennie to build a picture of a high-quality coaching outfit that had earned its stripes domestically and abroad.

It's no fun for Wallabies fans when Kiwis act like this. It's easier to imagine them as a bunch of arrogant, self-righteous bullies who have little knowledge of or regard for Australian rugby.

That may be true among a section of their fans, but it's not there in this coaching group, who were already keenly aware of Noah Lolesio and his ability to play right on the gainline.

Let's speak plainly: this current Wallabies squad probably isn't as good as the All Blacks squad.

That's not to say it won't be, in time, but the All Blacks currently have the advantage in personnel, while the Wallabies appear to be a little underpowered in a few positions.

Rennie and co would no doubt love access to another big second-rower such as Rory Arnold, while Isi Naisarani and Lachie Swinton have their opportunity on Friday afternoon to show their back-row punch for 'Australia A' side against Argentina.

Meanwhile, the loss of Samu Kerevi to Japanese rugby continues to niggle like a stubborn thorn in the side, particularly when injuries bite as they have done this week.

Yet there has been a doggedness about the two performances in New Zealand that suggests the longer-term prognosis is good, and that we are seeing some promising foundations being put down.

The bad news in the short-term? The All Blacks are wise to it, and may play like a team that feels the threat.

Cheika has put pride back in Australian rugby: Jones