On this week’s episode of The Left Wing, Will Slattery and Luke Fitzgerald are joined in studio by Irish Independent rugby correspondent Cian Tracey to discuss all the latest rugby news.

The lads start with their belated reaction to the news that Andy Farrell will replace Joe Schmidt as Ireland head coach after the World Cup, with Luke saying that it’s a natural time to move on after a brilliant tenure.

Talk moves to Leinster’s strength in depth after their big win over the Dragons, with Will asking how the province is able to hold onto so much young talent.

Joey Carbery’s continued development at out-half, Ulster’s progress under Dan McFarland and Connacht’s good form are also up for debate.

Subscribe to The Left Wing, Independent.ie’s Rugby podcast, with Luke Fitzgerald and Will Slattery for the best discussion and analysis each week. From in depth interviews with some of Irish rugby’s biggest stars to unmatched insights into the provinces and the national team, The Left Wing has all your rugby needs covered.

Listen and subscribe to The Left Wing on iTunes and Soundcloud 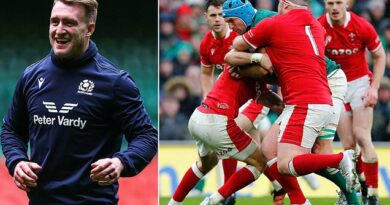