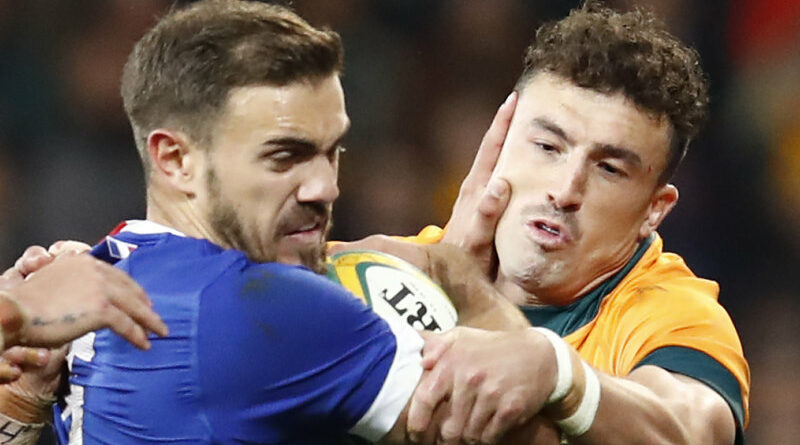 Australia’s three-Test series with France could not be more perfectly set up.

After the Wallabies’ 23-21 win in Brisbane, the tourists responded in classic underdog fashion with their own two-point victory. It all adds up to a salivating decider in Brisbane on Saturday. 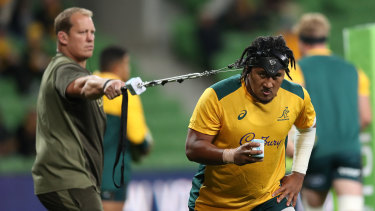 Brandon Paenga-Amosa in action before the second Test.Credit:Getty

With the help of rugby stats guru Kate Lorimer, we take a deep dive into the numbers that matter.

The match begins at 8pm (AEST) and will be shown on Channel Nine as well as Stan Sport.

The depth of both sides will be tested in their third international in 11 days.

The last three Tests between Australia and France have been decided by a margin of two points.

France have never won back-to-back Tests against the Wallabies in Australia. The closest they came was a 14-14 draw in 1972 before a 16-15 win at Ballymore.

Tuesday marked France’s first win on Australian soil since 1990 and Les Blues will be looking for back-to-back victories against the Wallabies for the first time in almost 28 years. They won at the Sydney Football Stadium in 1990 and then in Bordeaux in 1993.

The Wallabies have not lost to France in Brisbane for 49 years and won every match at Suncorp Stadium since a slip-up against England in 2016. 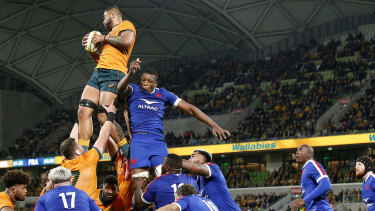 Australia’s lineout is their most productive try-scoring source.Credit:Getty

The men in gold are chasing their first series win in Australia since a successful home French campaign (3-0) in 2014, while the tourists will be chasing silverware in the southern hemisphere for the first time since 2009 when they claimed the Dave Gallagher Trophy in New Zealand. The series was level at 1-1 but France won on aggregate (37-36).

This is the 50th Test between the teams but NSW was actually Australia’s representative team in the first match in 1928, which was later granted Test status in 1986.

The Wallabies hold the Trophee des Bicentenaires after a win in 2016 in Paris.

Coach Fabien Galthie has made seven changes to his starting line-up, with No.10 Antoine Hastoy set to make his Test debut.

The Aussies have made eight changes to their starting line-up, with Allan Alaalatoa, Darcy Swain, Lachlan Swinton, Isi Naisarani, Tate McDermott, Len Ikitau and Filipo Daugunu all coming into the XV. Hunter Paisami moves to No.12 from outside-centre.

Where the game could be won and lost

Australia were smashed at the breakdown in Melbourne, conceding six turnovers and winning just two (both from Michael Hooper).

Across both Tests, 11 of the Wallabies’ 18 total penalties conceded have come from ruck infringements (61 per cent), compared to just 27 per cent by France. 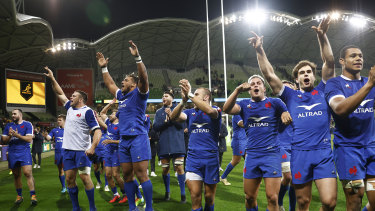 France have displayed an admirably old-school quality during the current Test series.Credit:Getty

The Wallabies haven’t taken their chances well compared to their rivals. Australia have averaged 10 visits per game into the opposition 22-metre zone and managed just 1.85 points per trip.

France have less than half the average visits (4.5) but chalked up 3.44 points every time they entered the 22. This is a key metric used by coaches to gauge a team’s attacking potency.

Rennie and attack coach Scott Wisemantel will be concerned by the fact the Wallabies have not scored more than two tries in eight games since they took over in 2020. 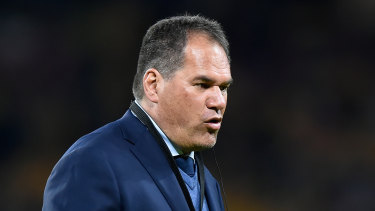 Dave Rennie and the Wallabies are eager to scale the world rankings.Credit:Getty

In terms of possession (63 per cent) and territory (61 per cent), Australia have had the upper hand. The men in gold have also made more metres per carry (6.3m to 5.7m).

Australia’s lineout is their most productive try-scoring source. They’ve scored 75 per cent (three from four) tries off the back of it.

France have been fast starters, outscoring the Wallabies 31-20 all up in the opening halves, and showed their ability to spoil Australian ball by averaging 13 turnovers per game.

The visitors have got over the gain-line more than the Wallabies and proved they’d rather kick than run out of their own end more than their opponents.

Michael Hooper: This is Hooper’s 55th Test as Wallabies captain, which puts him level with John Eales as Australia’s second most-capped captain and only behind George Gregan (59). Hooper has scored tries in his last three Tests – the longest streak of his 107-Test career. He has already played 160 minutes this series but good luck pulling him off the field if the scores are close. Hooper has managed five turnovers this series and 13 ruck cleanouts.

Marika Koroibete: Had a barnstorming performance in Melbourne, where he led Australia for line breaks (2), carries (15), metres (209), post-contact metres (130) and tackle breaks (7). 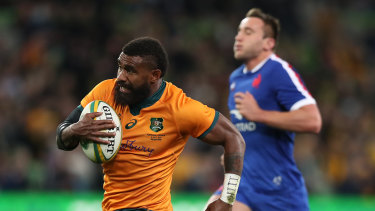 Lachlan Swinton: Only his second Test appearance after receiving a red card on debut in Brisbane last year against the All Blacks. Has a point to prove and will need to be the enforcer of the Wallabies pack.

Antoine Hastoy: The playmaker lined up alongside Wallaby Matt Philip for Pau in the Top 14 and was the competition’s third-highest points-scorer. The last time France named an uncapped No.10 against the Wallabies was Marc Sallefranqu in 1981.

Damian Penaud: One of six players to start every Test, the winger has scored five tries in his past seven outings for his country. Penaud’s father Alan played 32 Tests and three against Australia. He started opposite Tim Horan in a 1997 fixture at Ballymore when the pair both played No.10.

Melvyn Jaminet: Scored 23 points on Tuesday – the most by a Frenchman ever against Australia. Remarkably, France’s fullback hasn’t missed a single kick in his Test career.

Despite playing well below their best this series, the Wallabies ($1.54) are still firm favourites against France ($2.48). France are paying $7.50 to win by 13 points or more.

Who is in charge?

Kiwi referee Ben O’Keeffe has the whistle for this match and will be assisted by fellow New Zealanders Mike Fraser and Brendon Pickerill. Glenn Newman is the TMO.

Rennie has already put O’Keeffe under pressure. He has a big job ahead of him.

Watch the series decider between the Wallabies and France this Saturday with extended coverage, ad-free, live & on demand on Stan Sport from 7:15pm and also on Channel 9 from 7:30pm AEST.

‘The team is king’: Cheika says he won’t pick Folau again for Wallabies

Neil Francis: 'Ireland lacked the right attitude and showed no courage in their performance'