The Waratahs have been bundled out of the Super Rugby Pacific finals after a below-par performance riddled with handling errors in a 39-15 loss to the Chiefs in Hamilton.

A quarter-final assignment across the ditch against a team who put 51 points on them in April was always going to be a huge ask for the Waratahs but, after surprising so many to reach the final eight, the men in sky blue did themselves few favours.

“Credit to the Chiefs and they’ve had the wood on us all year. They were really good tonight,” said NSW captain Jake Gordon. “They’re really hard to contain when they get front-foot ball.

“They really punished our mistakes. We weren’t good enough.”

NSW trailed 27-10 at half-time and were told by their coaches to “not panic”.

The moment of the match was undoubtedly Will Harris’s superb 65-metre try in the second half that left the young NSW No.8 gasping for air and reinvigorated his team. 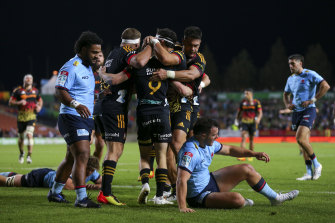 The Chiefs celebrate a try against the Waratahs on Saturday.Credit:Getty

Trailing 27-15 in the 46th minute, the Waratahs had enough time – and possession – to mount a comeback but hopes of registering a first finals win away from home since Super Rugby began in 1996 were extinguished.

Handling errors – 15 in total – cruelled the Waratahs as salt was sprinkled on an open wound when Chiefs halfback Brad Weber scored his second try to put the result beyond doubt.

Ultimately, the Brumbies’ slip-up against Moana Pasifika last week made the Waratahs’ task of staying in the competition an uphill battle.

The scars of a winless 2021 season are visible no longer. NSW have restored credibility, despite a disappointing outing in the pressure-cooker environment of sudden-death rugby.

Waratahs No.10 Tane Edmed was poor off the kicking tee, missing three attempts that saw eight points left out on the park. It may not have mattered in the end.

Waratahs coach Darren Coleman is a relaxed character but some of the decision-making and inaccuracies from his side ensured he would leave Hamilton feeling very unsatisfied despite an excellent first season in charge.

The Chiefs slotted an early penalty before crafty halfback Weber helped his side streak to a 10-0 lead inside seven minutes by scoring under the posts.

A sensational try in response from Dylan Pietsch restored morale and settled the visitors.

Off the back of some excellent front-foot ball, Tahs No.10 Ben Donaldson put in an inch-perfect grubber kick that Pietsch picked up for arguably the Waratahs’ best try of the season. That was until Harris’s solo effort.

Edmed levelled scores at 10-10 after 19 minutes before Luke Jacobson sliced through a driving maul to give the Chiefs the ascendancy in a highly physical contest where the battle for breakdown supremacy was fierce.

However, Edmed’s two missed penalties in the first half were costly as the Chiefs crossed again courtesy of Alex Nankivell after a horror moment down the Waratahs’ end.

With a desire to run out of their half, Edmed threw a wayward pass that Donaldson and Mark Nawaqanitawase both fumbled before Nankivell kicked through and regathered.

It was a massive coach-killer that prompted Chiefs No.12 Quinn Tupaea to begin patting Donaldson on the head.

Donaldson pushed Tupaea after the arrogant and unnecessary gesture the Waratahs won’t forget any time soon.

Harris’s long-range stunner reduced the margin to 12 points before Weber dived over again and Pita Gus Sowakula burrowed over from short range. 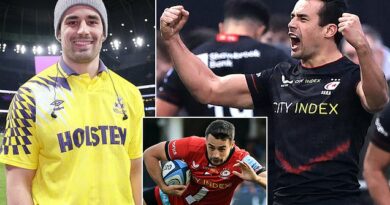 'I will always have the desire to play for Ireland' – Zebo