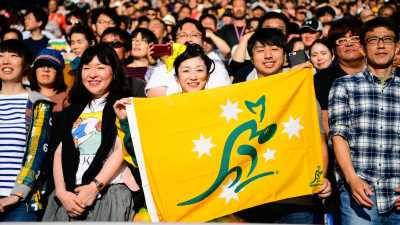 Before the Wallabies tackle Scotland, England and Wales, they’ll have to go through Japan.

The Japanese Rugby Union on Friday confirmed the Brave Blossoms will face Dave Rennie’s side in Oita on October 23, finalising the Wallabies’ spring tour plans.

It’s the first time the Wallabies will have played Japan since 2017, when they beat Jamie Joseph’s side 63-30.

After the short stop in Japan, the Wallabies will travel from Oita to Edinburgh for their clash against Scotland at Murrayfield, before matches against England and Wales round out the Test season.

“We’re really looking forward to squaring off against Japan. They showed everyone at the World Cup in 2019 that they are a top nation and can match it with the best,” Rennie said.

“Jamie and Tony (Brown) have built a formidable squad that plays a really exciting, up-tempo style. We need to continue to test ourselves with this variety of play, so this is an important match for us as we continue to build ahead of the next World Cup in France.

“It’s been a really big year already for our squad with some starting back in February for Super Rugby AU, so we will have to continue to manage the lads over the next month or two and into the Spring Tour in the UK.”

Rennie is expected to have more overseas-based players at his disposal for the spring tour as the Wallabies leave some players in Australia to complete a pre-season before joining their Super Rugby squads.

The October clash will be just the seventh time the two nations have played one another since they first met at the Sydney Cricket Ground in 1975.

“Today’s announcement is tremendous news that will be welcomed by Brave Blossoms fans in Japan and around the world,” Joseph said. 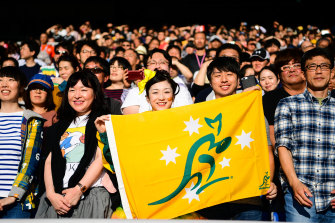 The Wallabies will face Japan in Japan before heading to Europe for the spring tour.Credit:Stuart Walmsley/Rugby AU

“As a team, we’re very much aware of the significance of this match, being almost two years to the day that Japan last played international rugby at home, in our Rugby World Cup quarter-final.

“The opportunity to play a Test match on home soil, against a team [of] the quality of Australia, is a hugely important moment for us to reconnect with our fans and the wider Japanese public, following the success of the 2019 World Cup.

“The Wallabies are a strong team, with quality players throughout their squad; like Japan, they look to play an exciting brand of fast, attacking, running rugby.

“The match will be a great opportunity for us to play our style of rugby against a side that brings something different to the Test matches we have played in recent years.

“Both Japan and Australia will be heading onto Europe following the match, so both teams we will be looking to make the best possible start to their upcoming tours.”

George Ford – Win a World Cup but only be a sub? I’d take that!

‘Kids are killing themselves’: Roberts’ stern message to Folau