Home » Rugby Union » Wallabies ‘still at the foot of the mountain’ heading to 2023: Rennie 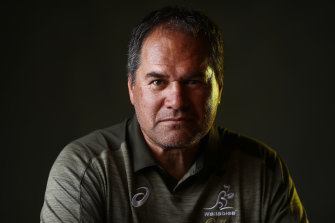 Wallabies coach Dave Rennie isn’t the sort of man who indulges in spin to make himself or his side look better than they are.

The 57-year-old is about to embark on a brutal 14-Test campaign with the Wallabies – the Herald has learnt an enticing Test in Japan is likely before the Spring tour – starting with a three-match series against France this month. In an in-depth interview, Rennie offers his unvarnished opinions on the Wallabies and the state of the game in general. 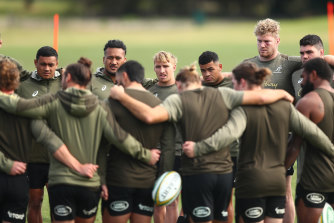 Rennie has been working the Wallabies hard ahead of the Test series opener against France on Wednesday.Credit:Getty

“We’ve got some guys who are in fantastic nick, and are coping with the workload well but others are finding it a real challenge,” he says. “But that’s how we’ve designed the first couple of weeks, to give the guys an understanding of the lift in intensity at international level, and the conditioning and the skill set under pressure and under fatigue required.

“We’ve spent a lot of time on foundations and fundamentals…We’re in a lot better place than we were two weeks ago.”

To use a non-technical term, the Wallabies have been flogged on the Gold Coast. Returning second-rower Sitaleki Timani has already said he has never trained as hard. Nic White and Scott Sio have already left the camp with injuries. In his first session after returning from France (and quarantine) second-rower Matt Philip copped a black eye. Rennie says the days have been starting at 6am and finishing at 6pm.

The tourist strip has been no place for the faint-hearted as Rennie tries to eradicate the soft underbelly that was evident in Super Rugby Trans-Tasman.

It goes without saying that all Test sides want to play an attractive, winning style of rugby that pleases everyone. Yet, those sort of platitudes really tell us nothing about the identity of a team, and what they want to be known for.

During the trans-Tasman competition, Kiwi players and coaches would note that the Australian sides had some big humans and liked to be direct, but perhaps lacked the deception and underlying skill base of the New Zealand teams. 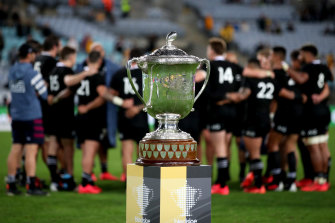 The Wallabies coach admits the All Blacks remain a cut above.Credit:Getty

Rennie says the handling and footwork of the All Blacks’ tight forwards continues to set them apart, and that a serious amount of work is under way to try and improve so the Wallabies can at least match them.

But we still aren’t at the heart of the matter, so the Herald presses the coach on the part of the game that has always defined the great Wallabies sides: defence. We wonder that, if there was one area of progress above all others he would like to see against the French, would it be defence?

“Yep. That would be really important,” Rennie says. “Look, for a big part of last year we defended really well. We got towelled up by the All Blacks in Sydney but for a big chunk of the rest of that series we defended pretty well.

The next Super Rugby Trans Tasman format and the spectre of COVID-19:

“But in those games, and the French are the same as the All Blacks, if you kick poorly and chase poorly, they can hurt you.”

And therein lies the key to the identity that Rennie is trying to give this Wallabies side. “There’s lots of areas where we need to [be] better, but from an identity point of view, we want to be seen as hard to beat,” he says. “That starts with your defence, complemented by the quality of your attack.”

Of course, it can be a dangerous game for a Wallabies coach, particularly a Kiwi one, to talk about defence, lest he stand accused of abandoning the so-called ‘Australian way’ of playing. But notwithstanding the fact that hard-shouldered defence is also the Australian way, Rennie is keenly aware that in the Test arena in recent years, the best sides without the ball have been successful.

Indeed, he wonders if it is not time for World Rugby to carefully address that imbalance. “I always think that when they tinker with the laws there’s often a defensive focus to it,” Rennie says.

“If anything we should be looking the other way. What we don’t want is the ball being slow and a wall being in front of people, and no footy played.

“What we don’t want is interpretations tending towards the defensive side.”

The missing names from the French squad have been well documented, but that only increases the difficulty of the three-Test series. Expectations of a Wallabies series win have been raised, and the French will feed off that. The fact that Wallabies back-rower Rob Valetini is already talking about being the No.1 side in the world will be more fuel for the visitors. 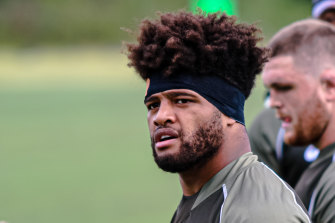 Rob Valetini this week said the Wallabies could be world No.1 by the end of the year.Credit:Andrew Phan/Wallabies media

But how will they play? Rennie has a fair idea, and he sees a link between the presence of Wigan rugby league legend Shaun Edwards on their coaching panel – he holds the defence portfolio, which he previously did at Wales – as central to their overall game plan.

“I think what we’ve seen with Shaun Edwards going there…obviously it’s a massive defensive focus but they’re kicking the ball a lot more too,” Rennie says.

The French approach to turnovers:

On managing James O’Connor over a 14-Test season:

“When he was with Wales, if they’ve gone two or three phases and haven’t got what they want, they’ll kick because overplaying and turning over ball when your defence isn’t organised …you can get punished.

“But what that does is provide us with opportunities, because they are going to give us a lot of ball.

“We treat counterattack as a set piece. We’ve got a lot of structure around that and it’s going to be important. They’re going to kick a lot of ball to us.”

A smart investor wouldn’t put too much money on both James O’Connor and Matt To’omua starting in the first Test against the French on Wednesday. 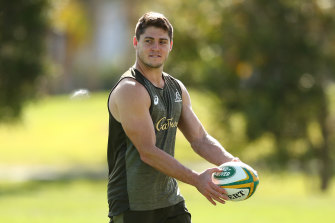 Reborn Wallabies back James O’Connor faces a long season with the national side.Credit:Getty

In fact, neither may make it, with Rennie acknowledging that O’Connor had a ‘question mark’ beside his name while To’omua (neck) was facing a ‘race against time’.

“He’s just got a little bit of a hip flexor/groin issue,” Rennie said of O’Connor. “We’re not going to rush him though. We’ve got a little bit of versatility there with Noah Lolesio … and obviously we played Reece Hodge there last year too and he did really well for us.

“Matt has been out with a bit of a neck injury, so I guess it’s a race against time for him at the moment.”

Both would be big losses, for their experience as much as anything. There is palpable disappointment in Rennie’s voice when he mentions the injury-enforced absence of White (knee) at halfback, even though that blow may well be softened by the availability of Jake Gordon.

But there is also a determination in Rennie’s words. Big shifts are needed to get the Wallabies back to the top of the world but he detects a healthy appetite within his squad.

“This a big year for us,” he says. “We’ve got 14 Tests, all of them against strong opposition. It’s a really good program for us. We’ll learn a lot about each other and we’ll be in a lot better state by the end of the year.”

It’s time the Wallabies got those mountaineering boots on for the climb ahead.

Team of the week: Star players from the European Champions Cup round two

Donors race to fund Israel Folau’s legal fight against RA, but where is the money going?