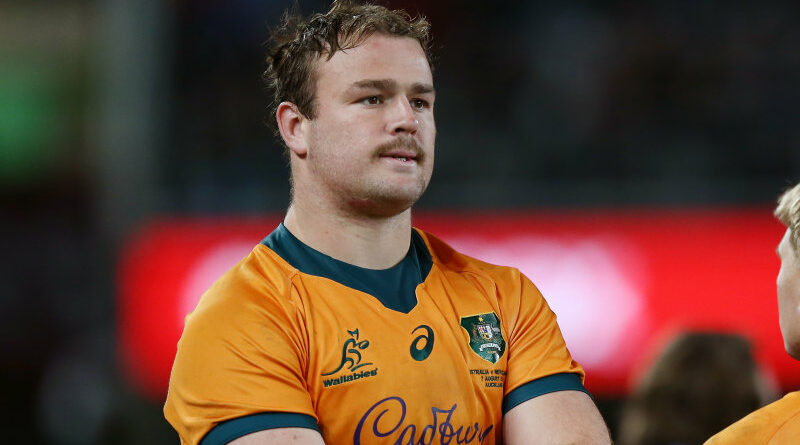 At the end of their debut international seasons, Harry Wilson and Noah Lolesio were seen as two of the rising stars around whom Wallabies coach Dave Rennie was set to build his 2023 World Cup squad.

Less than 12 months later, neither will be on the flight to Japan on Wednesday when the Wallabies squad embarks on its spring tour.

Wilson’s omission from the squad announced on Friday had been forecast, but it still came as a surprise given he started in all six Tests of his debut season in 2020 before a stellar Super Rugby campaign in 2021.

While Wilson played in the first four Tests of the year, against France and New Zealand, Rennie picked Rob Valetini, Pete Samu, Lachlan Swinton, Rob Leota and Sean McMahon to fill the back-row spots in his touring party. The big Queensland No.8 has been sent back to the Reds to complete a full pre-season instead.

But that doesn’t mean the Wallabies no longer view Wilson as a top-tier Test match player.

“He’s a Test match rugby player. There’s no doubt. He has a big career ahead of him,” Wallabies forwards coach Dan McKellar told the Herald. ”I have a lot of respect for how (Wilson and Lolesio) both handled the decision and the conversation. 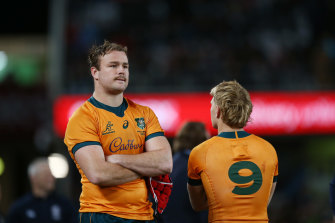 “Dave had ongoing conversations with Wilso around (not touring) as a possibility. And Wilso really brought into it. He sees the benefits of it.”

McKellar believes the benefits will be clear for all to see in February, when Wilson’s campaign with the Queensland Reds kicks off. The Wallabies want Wilson to develop one facet of his game – footwork.

“He’s been given feedback for 12 months or so now, and I take my hat off to him in the maturity with which he’s handled that feedback and the decision,” McKellar said. “He’s really keen to rip in over the next few months at the Reds and work on the things that we’ve spoken about.

“It’s footwork around his ball carry and agility. Not just running the ball hard and straight or hitting a line. It’s being able to beat defenders with subtle footwork. Things he can easily shift if he’s allowed time to invest in those areas and work on it. 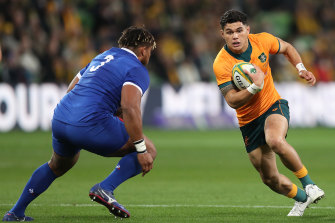 Noah Lolesio was another surprise omission from the spring touring party.Credit:Getty

“He’ll be faster across the ground and into the air now he has that block of time to work on his footwork, his speed and agility. It will compliment all areas of his game.”

As his coach at the Brumbies, McKellar has always backed Lolesio. After a tumultuous start to his career – in which he has played the All Blacks in five of his first eight Tests – the Wallabies want Lolesio to develop physically, and spend more time watching the way Cooper and James O’Connor go about managing matches.

“His speed, his agility, being sharp. He’s a very good footballer, who identifies space earlier than others,” McKellar said.

“Physically, we need to make sure he’s capable of taking those opportunities, making sure his acceleration and speed off the mark is there so he can convert the opportunities that he sees.”

“Game management – there’s a big side of that. It’s not just Noah. It’s most Australian teams, including the Wallabies, getting the understanding that kicking and attacking kicking, builds pressure on the opposition.

“Noah’s seen that for himself. Being able to sit in the grandstand and watch it, and observe all the messaging and guidance that we, as a coaching staff, give to the playing group throughout the week.

“Quade, having the experience and nous to go and execute it, he’s done that well. Quade’s not the player he was in 2011. He’s not dancing around like Michael Jackson and beating defenders left, right and centre. He’s quite similar to a Benji Marshall type player.

“He’s reinvented himself. He’s always had one of the best passing games in the game – and he’s still got that – but with age, his speed and agility probably isn’t what it was in 2011. But his direction and game management is far superior to what it was back then, as well.”

Stan Sport is the only place to watch the Wallabies v Japan on October 23 and the All Blacks v USA on October 24 – both matches streaming ad-free, live and on-demand on Stan Sport. Start your 7-day free trial here.