Home » Rugby Union » 'What's he like?' What does he lift?' – Feek reveals how perception of Irish rugby has changed in New Zealand

Based between New Zealand, Japan and Ireland, Greg Feek is a quintessential citizen of the world.

His All Black caps, accent and Kiwi sense of humour mean the Ireland scrum coach can’t hide his roots but as he contemplates the final year of an almost decade-long association with this country, Feek can see how perceptions have shifted since he took up the job as Leinster scrum coach in 2010.

His arrival came soon after the province’s set-piece struggles had ended their European season in Toulouse, while two years later an injury to Mike Ross would leave the national team horribly exposed against England in Twickenham.

On Feek’s watch, those days are a distant memory now. A solid scrum is something Ireland fans take for granted and the transformation mirrors the increase in standards in other areas.

Humility is prized in Camp Schmidt, so it was no surprise to hear Feek play down his role in the country’s scrum success.

“It’s not something that I walk around high-fiving myself about, I’m not sure you can do that anyway!” he joked as he considered the progress.

And the scrum is not the only thing to have changed in the time since Feek arrived in Dublin, not long retired from his stellar career with the Crusaders and New Zealand.

Now, when he returns home the locals are full of questions about a country they rarely gave much of a thought to a decade ago.

“It’s funny you say that,” he said when asked about the perception of Ireland in his native land.

“My sister works in the media down there and she was telling me… she’s not into the sport as much as what I am, but she was saying that sort of 10 or 15 years ago Ireland were always the sort of team that could beat somebody big – do you know what I mean? – they always had the potential but now that potential has come through and it’s a ‘watch out’ type of thing.

“There’s definitely a massive shift even to the point where I get asked… like 10/15 years ago they wouldn’t have known too many Irish players.

“People are asking what’s this Players Management Programme? Why is that so good, why is this so good? How do you manage this? So, it’s not just the threat of winning, guys want to come into camp and watch and learn.

“That’s probably the biggest change, they’re learning off what we’re doing. Everyone goes into different environments with different sports to see how things are done differently. We do it. I’ve done it a bit this year.

“We’ve had (people from) rugby league, we’ve had Gaelic and other rugby teams. I remember (All Black defence coach) Scott McLeod and (Japan assistant) Tony Brown were in here a couple of years ago. There’s always people asking as well. We’ve had to deter a couple of guys because they’re maybe a bit close to the opposition and things like that, but you always get asked. I know Joe (Schmidt) gets inundated (with requests) but it’s probably reflects a little bit of how we’re going.

“The thing I really like about the Irish lads, our boys, is how modest they are. They’re always asking about other teams and watching; there’s a constant habit of wanting to learn and grow more.”

Another change that has taken place in Feek’s time here is the growing belief of Ireland’s young players in their own ability, as displayed by Jordan Larmour’s spectacular performance in Chicago last weekend.

Feek played with some all-time greats during his own career and rates the 21-year-old in some elite company.

“I came though the age-grades with Christian Cullen, Carlos Spencer and guys like that,” he said. “It is stating the obvious that when you see something like that, but the only other person who has footwork like that and can do things like that that I can remember would be someone a Carlos or Christian Cullen.

“Cully had more of a glide to how he did things, I suppose Jordan is probably a bit more quicker in short spaces.

“I think one of the boys was calling him ‘Phone Box’ and those sorts of nicknames the other day… I think he has a lot of energy about him and that shows. When he gets the ball he has just got so much energy.

“I actually know a little bit about Jordan’s background and he was scoring tries at 10 years of age, a high number, and doing similar things.

“That’s probably what you are getting now whereas maybe 10/15 years ago guys weren’t playing that kind of rugby at 10 years old.

“Now you have got guys coming through and they are just playing their natural way of how they have always played it, getting coaching and seeing things quicker.

“There is different reasons for all this but when you have got X-factor like that it does give you confidence.

“The environments that he has probably walked into at Leinster and then here has made him flourish. In international rugby, you don’t often get those opportunities as you know so the more we see of it the better it is for all of us.”

Much has changed during Feek’s time here and he has played his part in improving things to such a degree that the folks back home are taking notice.

Subscribe to The Left Wing, Independent.ie’s Rugby podcast in association with Laya Healthcare, with Luke Fitzgerald and Will Slattery for the best discussion and analysis each week. From in depth interviews with some of Irish rugby’s biggest stars to unmatched insights into the provinces and the national team, The Left Wing has all your rugby needs covered.

Listen and subscribe to The Left Wing on iTunes and Soundcloud 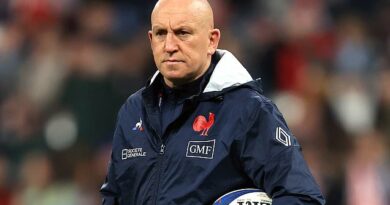