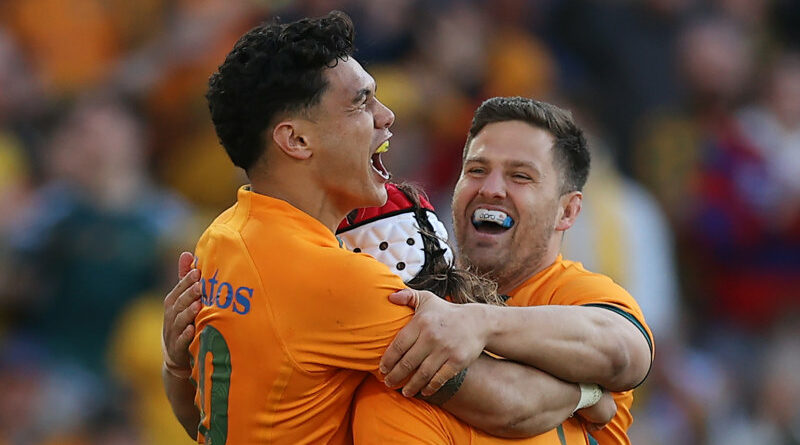 The Wallabies don’t face the All Blacks for at least another fortnight but their chances of breaking a 20-year Bledisloe Cup hoodoo are increasing by the day after New Zealand’s barely believable loss to Argentina on Saturday night.

Wallabies supporters will cry foul that it’s premature to talk about the Bledisloe Cup, beginning on September 15, but until Australia win back the famous trophy, bit-part sports fans won’t take an interest in the code.

A fortnight ago, even the most ardent Wallabies fan wouldn’t have said out loud that Australia could win back the Bledisloe Cup after an insipid 48-17 loss to Argentina.

But a 25-17 victory over South Africa on Saturday has again laid bare the fluctuating fortunes of a Wallabies side who, on their day, can beat anyone.

Similarly, Argentina’s 25-18 victory in Christchurch showed that under Ian Foster, the All Blacks are finding ways to lose matches against teams they’ve always had the wood over.

Under Foster, the All Blacks have lost six of their last eight Tests. What does an All Blacks coach have to do to get sacked? Teams outside the top 10 wouldn’t stand for such standards. 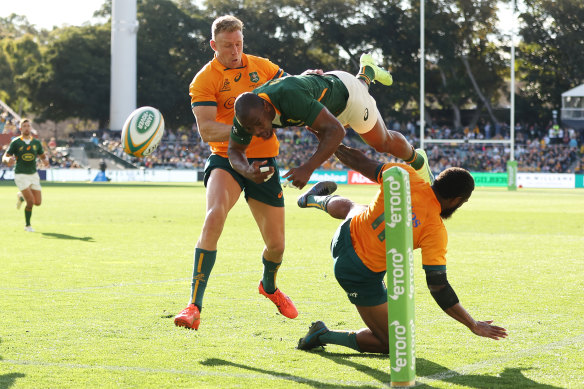 It would be foolish to declare that the Wallabies will win the Bledisloe back. Their chances are still slim. History shows that, and false hope is always Australia’s silent assassin.

But can they? Absolutely. The All Blacks are as fallible as we’ve seen for 20 years.

Make no mistake, this Wallabies side lacks cohesion, but the team showed a healthy Adelaide Oval crowd, and thousands watching at home, that with the right resolve and game plan, they can knock off big teams. This was an emphatic win that looked closer on paper due to two late tries.

Although Australia have had psychological issues when it comes to beating the All Blacks, there is a reason this year could be different.

The Wallabies always come out of a Super Rugby season looking clunky. No matter how many training sessions they have, they’re always short of practice on the pitch, where it matters most.

Traditionally, the Wallabies have to face the All Blacks first up. Sydney Bledisloe matches have been ugly bloodbaths.

But this year, Australia get four Tests against Argentina and South Africa, on top of a high-octane England series, to sharpen their game.

The San Juan shocker was bound to happen at some point in the Rugby Championship – it always does – but as far as preparations go heading into two huge games against New Zealand, playing the All Blacks later in the year is beneficial. 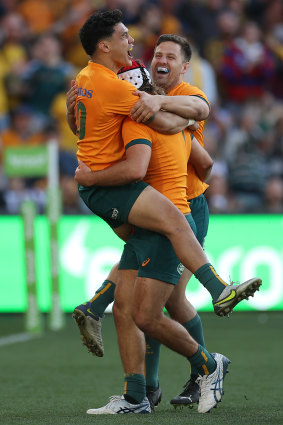 As far as confidence-boosting wins go, Saturday’s eight-point victory is chicken soup for the Wallabies’ soul.

It is validation that a dogged defensive display and clever game management will win games of Test rugby, even when the likes of Michael Hooper, Samu Kerevi and Quade Cooper aren’t on deck.

That Australia can spend almost a month on home soil before a clash against New Zealand on September 15 in Melbourne is gold. Wallaby gold.

Next Saturday’s clash in Sydney against South Africa will be the true test, as No.10 Noah Lolesio was quick to point out at full-time.

“The challenge for us now is to be consistent,” said Lolesio, whose Test share price went up after a cheeky flick pass to set up former Junior Wallabies teammate Fraser McReight for a second try.

If there’s one player the Wallabies need to wrap in cotton wool for the next 18 days, it’s Marika Koroibete.

But how do you tell a guy who only operates at fifth gear to crank it down a bit? Impossible.

He’s an all-or-nothing player whose work ethic is on par with Hooper. He empties the tank game after game.

Without the Wallabies captain in the ranks, Koroibete is the energiser bunny that teammates feed off. The slaps on the back Koroibete received when he barged Makazole Mapimpi over the sideline, with his team a man down, said it all.

All Blacks great Andrew Mehrtens was asked on the Stan Sport coverage whether Koroibete was his player of the match as he trudged off late in the second half.

“Man of the match? He’s my man of the century,” Mehrtens said. “He’d probably play on for another 40 years if he wanted to.”

Koroibete won’t need to if he can help the Wallabies win the Bledisloe back.

However, regardless of whether the All Blacks continue to implode, the best form guide for Bledisloe glory will be there for all to see next week at a shiny new stadium in Sydney.

What this Wallabies team will produce is genuinely anyone’s guess.

Watch every match of The Rugby Championship on the Home of Rugby. All matches streaming ad-free, live and on demand on Stan Sport.

Wales could return to Wembley for autumn fixtures