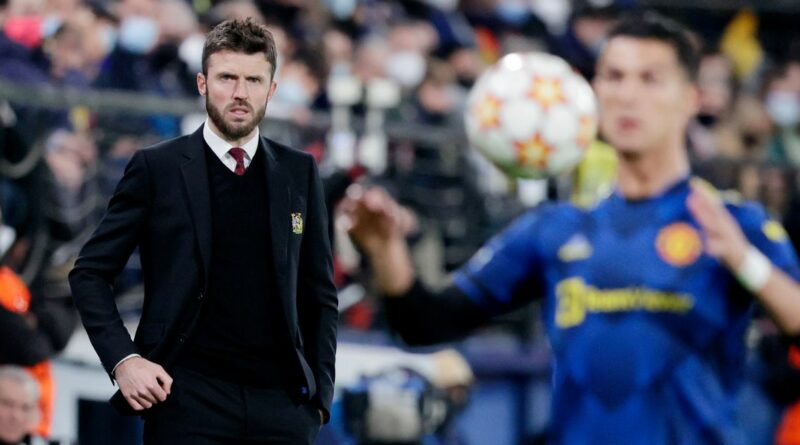 Michael Carrick was in the dugout instead of Ole Gunnar Solskjaer for Manchester United’s Champions League tie against Villarreal, but the story was unchanged on the pitch.

Once again it was Cristiano Ronaldo who provided the telling contribution for United, popping up with a vital goal to help secure a 2-0 win in Spain.

David de Gea kept Carrick’s side in the contest with some impressive saves before Ronaldo followed up his dramatic goals against Atalanta and Villarreal with another strike.

Villarreal were architects of their own downfall, trying to play out from the back, allowing Fred to steal the ball and Ronaldo to lob the stranded Geronimo Rulli in the 78th minute.

There was still time for Jadon Sancho to have his moment, with the £73million man smashing a second in off the underside of the bar on the break in the 90th minute to make certain United's progression to the last-16 of the Champions League.

Carrick described the game as a "fresh start” and he will have been delighted with the end product.

Daily Star Sport has taken a look at two things Carrick got wrong and two he got right.

What Carrick got right…

Every Manchester United line-up will be debated in the hour before kick-off, but this match was always going to be a particularly interesting one.

Carrick is a self-confessed Solskjaer disciple. Yet with the manager gone, this was his chance to come out from the shadows and make his mark.

His line-up contained four changes from the shambolic defeat by Watford, the headline of which was Bruno Fernandes being replaced by Donny van de Beek.

It was Fernandes’ awful attempted clearance which led to the Watford penalty on the weekend and he was due. Van de Beek scored the last goal of Solskjaer’s era and deserved a start.

Carrick sugar-coated the decision, describing Fernandes as a “fantastic player and a good person” who “ran his socks off on Saturday” in his pre-match interview, but make no mistake: this was a dropping.

Van de Beek did not make an immediate impact – and he was replaced by Fernandes after 66 minutes – but he did show that rotation is possible in the post-Solskjaer era.

Sancho came into this game as a £73m signing who had failed to score or register an assist in 14 games for his new side.

A change in management can be important for a player short on confidence and Carrick’s immediate backing will mean a lot to Sancho.

Although he did swap positions with Anthony Martial, Sancho was generally positioned on the right wing – the role he was bought for.

United played a conservative game, which was perhaps understandable, but Sancho did provide a few glimpses of his talent, skipping down the wing and putting in crosses.

What appeared to be his big chance came in the 71st minute when he cut inside and found space from Fernandes’ pass, only for his shot to be saved by the Villarreal goalkeeper.

Thankfully for him that was not the only chance. With the game winding down, United broke forward and Sancho rifled in off the bar for the breakthrough moment right at the death.

What Carrick got wrong…

Carrick’s only change of the defence saw Alex Telles replace Luke Shaw at left-back, so it was hardly surprising to see United’s problems continue.

Villarreal started much the brighter of the two sides and carved out a few openings inside the first 10 minutes. Luckily for United, they had De Gea in goal.

United pay their Spanish goalkeeper £375,000 per week, which are wages befitting of a star player. But that expenditure should not mean that they want to get their money’s worth.

Good teams generally don't have their goalkeeper as their star player. Ronaldo might argue otherwise, but De Gea is United’s star player.

The goalkeeper made some solid saves in the first half, before pulling out an eye-catching stop from Manuel Trigueros’ drive in the second period.

Whoever does take over the reins needs to find a way to limit the number of saves De Gea makes.

A big part of the problem at United is nothing new: the pair in holding midfield.

The position has long been a talking point for the club, yet they decided not to sign a new midfielder in the summer transfer window, instead bolster their attack and central defence.

Scott McTominay and Fred are hard workers, but they are not world-class players with intrinsic positional sense and a nose for danger. This was once again very clear against Villarreal.

While they did not overcommit in searching for a goal, the Spanish side did fashion plenty of openings that should worry Carrick.

The incoming manager may well look to the January transfer window as a means to solve United’s long-term problem, because it is not sustainable to rely on Ronaldo's goals.