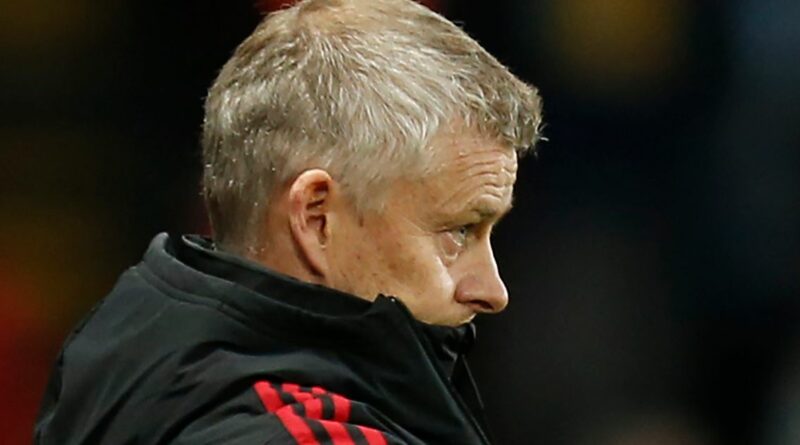 Ole Gunnar Solskjaer has been left on the brink of the sack after 10-man Manchester United suffered a humiliating 4-1 defeat to Watford at Vicarage Road.

If the Norwegian was hoping for a calm, routine victory following the international break, the 48-year-old should have known better.

The contest began in dramatic circumstances when just six minutes into the first half, Scott McTominay brought down Josh King inside the penalty area and referee Jonathan Moss pointed to the spot.

Watford missed from the spot twice after Ismaila Sarr saw his efforts saved by David de Gea and the visitors survived.

But goals from Joshua King and Ismaila Sarr gave the hosts a deserved lead at the interval and the damning aspect of their performance was that it could have been more.

Substitute Donny van de Beek got one goal back five minutes after coming off the bench, before Harry Maguire's red card effectively ended United's chances of a point.

But late strikes from Joao Pedro and Emmanuel Dennis piled on the misery in stoppage time to make it four defeats in five games for the Red Devils.

When a manager is under pressure and the team under-performing, there is usually one player the fans are clamouring for to be included.

But out of sheer principle, it seems Solskjaer is refusing to give Donny van de Beek the game time he desires — and the Man United away support made their feelings clear about his omission.

Speculation is rife that the 24-year-old is desperate to leave in January after seeing his attempts to secure a loan move over the summer blocked. The minutes he had been promised simply haven’t followed, so few can blame the Dutchman for wanting to leave.

After watching Nemanja Matic and Scott McTominay flounder against Watford’s energetic side, the Norwegian had Van de Beek stripped and ready to come for the second half with his side two goals down.

And within five minutes he proved why he should be in the team, having the desire to burst into the box and head home from Ronaldo's knockdown to get United back into the game.

He was the best player on the park, covering ground in midfield areas and inspiring his colleagues to lift their effort levels.

But by ignoring the midfielder yet again for his starting XI, Solskjaer has given ammunition to the Van de Beek loyalists who want him out.

Another change in tactics

When you look at Manchester United's supposed title rivals in the Premier League, there is a coherent pattern in how Chelsea, Liverpool and Manchester City set up.

Thomas Tuchel very rarely deviates from his 3-4-3 setup, while Jurgen Klopp and Pep Guardiola will stick with a 4-3-3 so long as the ball is still round and there are 22 players on a pitch.

But for Solskjaer, there is no clear identity. Pragmatism is important as a manager, but the constant and significant changes to their setup has quite obviously left the players with limited understanding of their roles.

One week, Cristiano Ronaldo was playing alongside Edinson Cavani in front. Against Watford, the Portuguese was asked to lead the line on his own.

When Solskjaer picked his line-up against Man City, he had three centre-backs. Here, it was two and Maguire looked exposed with that extra man at the back – only compounded by his late dismissal.

There is a palpable lack of comfort with the system Solskjaer is choosing for his teams. The pressing is half-hearted, the passing is tedious and slow. And if he continues to rip up his playbook every week with a new formation, results like this will continue.

Some managers might have been tempted to dump Aaron Wan-Bissaka after his recent decline in performances, particularly against Manchester City.

But Solskjaer chose to stick the full-back he paid £50million for back in 2019, on the assumption that he would soon rediscover the form that made him one of the best full-backs in the Premier League last year.

But it is this blind faith in underperforming players that continues to backfire on Solskjaer.

The 25-year-old looked out-of-sorts and with no sense of positioning as Watford’s front three pulled him around like a ragdoll.

Wan-Bissaka hardly covered himself in glory when doing the basics either, failing to properly clear a simply header inside his own box and Watford scored directly from it.

After that, United collapsed defensively and Wan-Bissaka looked lost amongst a flimsy United backline. Without Raphael Varane, they look vulnerable and Watford knew it.

It goes some way to suggesting why Solskjaer has reportedly revived a move for Kieran Trippier. But on this form, Diogo Dalot would argue he is worth a start — the Portuguese surely can’t be as low on confidence as Wan-Bissaka is right now.

There was something ominous about the way United were creeping back into the game before Maguire's sending off for a mindless challenge on Tom Cleverley.

United were on top at the time and had chances to equalise through Ronaldo and Bruno Fernandes, but paid the price after Maguire lunged in after losing the ball.

Solskjaer looked furious but still high-fived his captain as he made his way to the tunnel.

And yet, the Norwegian should have been finding a way to add another body to his backline.

Instead, Dalot's introduction came far too late and Watford were growing in confidence again before Pedro and Dennis struck late on.

Maguire's tackle had nothing to do with Solskjaer, but the aftermath, it was his responsibility to shore things up.

He didn't, and now looks set to pay the price.