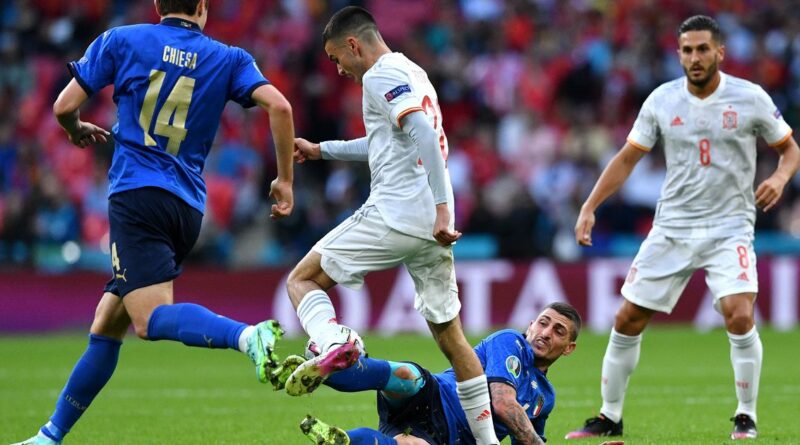 Italy beat Spain on penalties to earn a place in the Euro 2020 final against either England or Denmark.

Robert Mancini's side will play the winners of Wednesday's second semi-final after a thrilling last-four clash was decided by spot-kicks.

Spain dominated much of the Wembley clash, but failed to make the most of their early superiority with Mikel Oryarzabal and Ferran Torres among those to miss first-half chances.

Italy turned the game on its head on the hour mark as Chiesa finished off a quick counter-attack that had been started by his keeper Gianluigi Donnarumma at the other end.

Spain were level with 10 minutes to go when sub Alvaro Morata drove at Giorgio Chiellini before sending Donnarumma the wrong way – but the Azzurri were to ultimately prevail in the shootout.

Here are five things you may have missed from Tuesday's game.

Making his first start of the tournament, Mikel Oyarzabal missed a golden chance to fire Spain ahead in the opening minutes.

As Spain passed the ball around at will in the early stages, incisive balls from Busquets and Pedri found Oyarzabal in space, having run clear of the Italy defence.

But with the goal seemingly at his mercy, the winger somehow left the ball behind him as he failed to make the early chance count.

To make matters worse, replays clearly showed he was clearly he was onside when he made his darting run into the box.

Moments later, Ferran Torres fired just wide after a sublime scoop that will no doubt feature on his skills reel.

But worse was to come from Oyarzabal, as towards the end of the first half he was found in acres of space on the edge of Italy's box before blasting into the top corner – of the Wembley stand.

He was also to miss a header in the second half when Spain were chasing the game.

One for the skills reel for Torres

Shortly after Oyarzabal embarrassed himself with that early chance, Ferran Torres carved himself one with a sublime piece of skill.

Pouncing to intercept an under-hit pass from Nicolò Barella, the Man City advanced on Italy's box, shimmying past Jorginho with a lovely scooped flick ball before firing wide.

His fancy footwork was certainly one for the skills reel – although the shot afterwards won't make the cut.

Torres wasn't the only one with his tekkers on display at Wembley.

Aged just 18, Pedri impressed with a composed performance in midfield that was way beyond his years.

He showed off some audacious flicks and tricks as he gave the likes of Jorginho and Nicolo Barella the runaround in midfield.

And he completed the 90 minutes of normal time without missing a single pass – with all 55 of his attempts finding their intended targets.

Impressive stuff from the teenager.

After a good opening spell from Spain in the first half, Italy started to open up Spain more often on the counter-attack.

And Aymeric Laporte had a few first-half minutes when his kept his side level.

First he slid in on Federico Chiesa on the left touchline to stop the Italy winger running in on goal, then moments later he was on the opposite touchline to snuff out another Azzurri attack for a throw-in.

What seemed like seconds later he was in the box to hook away a long ball under pressure from Ciro Immobile, when the Italy striker would otherwise have been through on goal.

Laporte still wasn't done, heading away the ball from the resultant throw-in – and there was more last-gasp defending to come from the Man City man as Italy threatened in extra time.

After gathering the ball following a period of sustained pressure, Gianluigi Donnarumma launched a devastating counter-attack that ended with Chiesa's goal for Italy.

The Azzurri keeper charged forward before rolling out the ball, with Marco Veratti playing a ball into the box that was cut out by Laporte before Chiesa pounced with a great strike.

When Donnarumma started the move, he initially kept on running after releasing the ball outside his box, getting a good few yards in before realising he'd better stop – almost looking as if he was about to join the attack.

You've got to love his enthusiasm. 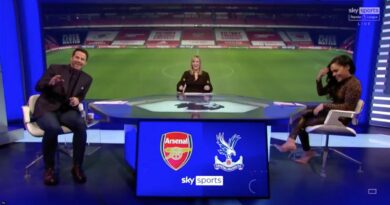 Czech Republic vs England: How to watch the Euro 2020 qualifier, what TV channel, online stream info and more