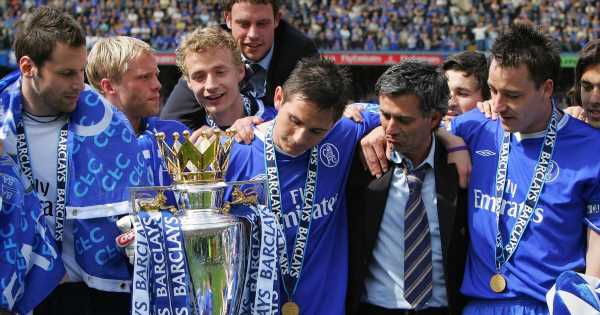 Despite the Premier League often standing out as the best in world football, over the last 20 years there have been just two Ballon d'Or winners from it.

That is in large part down to the dominance of Lionel Messi and Cristiano Ronaldo, but even before they emerged on the scene, English based footballers haven't been favoured.

Only six have picked up the award since its inception in 1956, a tiny amount which could soon change.

A massive 14 Prem stars feature on the 30-man shortlist for this year's event on November 29.

But history has shown even the finest performances in the English top-flight can go unrewarded. Daily Star Sport are taking a look at eight Premier League players who were robbed of a Ballon d'Or.

Frank Lampard was already well on his way to becoming one of the world's best midfielders, but cemented himself in that category in the 2004/05 season.

He bagged 13 goals and registered 16 assists on the way to the title, which was Chelsea's first league success in 50 years and Lampard's first major trophy.

More of the same followed at the start of the next campaign, but Ronaldinho, who had worse tallies for Barcelona in La Liga in 04/05, pipped him to the award.

Who was robbed the most? Let us know in the comments section.

Defenders are often overlooked in the attacker-dominated award, so Virgil van Dijk coming second in 2019 was a testament to just how good he was.

The Dutch international was influential en route to the Champions League final victory over Tottenham, scoring and assisting against Bayern Munich in the knockout stages.

An excellent Liverpool side were cruelly beaten to the league title, and van Dijk looked a shoe in for the Ballon d'Or after winning the UEFA Player of the Year – but Messi picked up his record sixth instead.

Alan Shearer was still good when he was bad, but in 1996 he was at the absolute peak of his powers – and still somehow didn't win.

He'd scored 31 goals for Blackburn in the 1995/96 season, secured a world-record £15m move to Newcastle, finished as the Euro '96 top goalscorer and started the new season on fire on Tyneside.

The striker was beaten in the voting by Brazil's Ronaldo, who came second by a single point to German midfielder Matthias Sammer – scandalous.

After joining Liverpool in the summer of 2007, Fernando Torres took to the Premier League like a duck to water.

An impressive 24 finishes made him the most prolific foreign goalscorer in a debut season in England.

He carried that form into Euro 2008, scoring the only goal of the game in the final against Germany.

But instead of his successes, the sports journalists recognised the achievements of that all too familiar duo of Messi (2nd) and Ronaldo (1st).

The historic Manchester United treble in 1999 meant several of their squad were in contention for the Ballon d'Or at the end of the year.

David Beckham, who had scored a crucial goal on the final day of the Premier League season, and assisted both of the stoppage-time goals in the Champions League final, was the obvious leading candidate, though.

But perhaps his overall lack of goal contributions cost him, as Rivaldo won by a healthy margin.

It wasn't just Lampard giving Ronaldinho a run for his money in 2005, because Steven Gerrard had a serious chance of winning too.

Only six points separated the England pair in the voting, demonstrating just how close they were in terms of greatness.

While Chelsea had won the league, Liverpool produced the best comeback in football history in the Champions League final, and man of the match Gerrard was the driving force behind it.

A return of 24 goals and 20 assists in a single Premier League season is simply phenomenal, and that's exactly what Thierry Henry was in the early noughties.

Everything Henry touched turn to gold in 2003 and he was well on his way to helping Arsenal to their miraculous invincible season come the Ballon d'Or ceremony.

It was Juventus midfielder Pavel Nedved, though, who claimed the prize instead of the Gunners striker who was runner-up.

The arrival of Eric Cantona at Old Trafford massively changed the Red Devils' fortunes under Sir Alex Ferguson in the 1992/93 season.

They'd been faltering in the title race but after Cantona was introduced part way through the campaign, they lost just two league games for the rest of the season.

The Frenchman made United champions for the first time in 26 years and had bagfuls of goal contributions in 1993, but shockingly finished third in the Ballon d'Or behind Dennis Bergkamp and winner Roberto Baggio.

Hibs chief executive threatens to close down section of ground