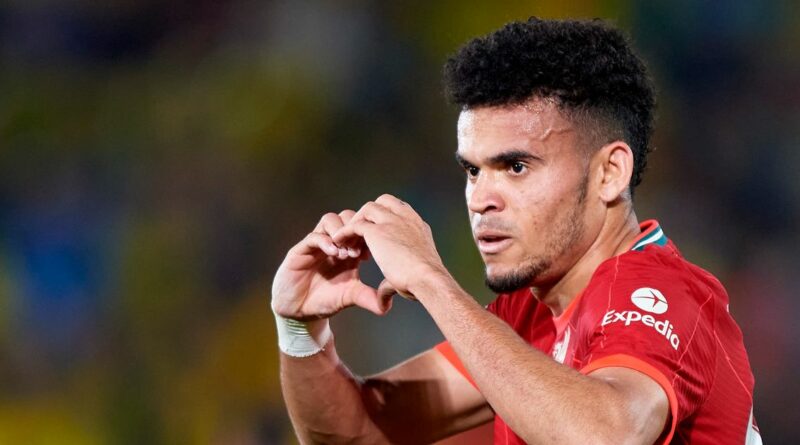 Luis Diaz is the toast of the town for Liverpool right now after coming off the bench to inspire the Reds’ Champions Leaguesemi-final comebackagainst Villarreal.

Liverpool travelled to Spain with a two-goal lead from the first leg but saw it wiped out by goals from Boulaye Dia and Francis Coquelin before half-time. The tie was on a knife edge at the break, but after Jurgen Klopp swapped Diogo Jota for Diaz it was one-way traffic, with Liverpool easing through 5-2 on aggregate.

Fabinho smashed in to make it 2-1 on the night before Trent Alexander-Arnold crossed for Diaz to head in a second. Sadio Mane made it 3-2 with a cool finish after some awful goalkeeping from Geronimo Rulli, but it was Diaz who took the majority of the praise post-match after Klopp’s side had made it through to the Champions League final.

"I’ve never seen a player come in and hit the ground running like he has,” former Liverpool striker Michael Owen said on BT Sport. “Playing in a foreign country, doesn’t speak the language, but to pick up the way Liverpool play like he has straight away is incredible.

“He’s a starter now, no question about it. Out of possession, he’s just Liverpool. If he gets fouled he doesn’t start rolling, he gets up and sprints and chases the ball back. You can’t buy that, that initial reaction to losing the ball, he wants to go and get it back again."

Diaz has hit the ground running since his move from Porto in January for an initial fee of £37.5million, but he is far from the only instant impact. Fernandes cost Manchester United an initial fee of £47m in January 2020. He immediately looked a bargain buy from Sporting Lisbon, with the Portuguese attacking midfielder racking up 15 goals and nine assists in 22 appearances across all competitions in the second half of the 2019/20 season.

United fans have certainly been busy talking about Bruno since then, with the midfielder quickly becoming the driving force of the side. Fernandes is the creative fulcrum and one of the best January signings in Premier League history.

He may be public enemy No. 1 at Arsenal following his acrimonious exit to Barcelona this January, but there was a time when Aubameyang was the embodiment of excitement and ambition at the club. The Gabon striker was signed from Borussia Dortmund in January 2018 for club-record £56m and was a major coup at the time, having banged in 141 goals in 213 games for the German club.

When he joined he had netted 21 in 24 matches that season for Dortmund and carried on the form in north London, scoring 10 goals in 14 games after joining the Gunners.

Coutinho was quite a low-key arrival on Merseyside in January 2013, signing from Inter Milan for £8.5m. But it was immediately clear that Liverpool had signed a star, with the 20-year-old chipping in with three goals and five assists in his first 13 Premier League games that season.

He went on to contribute 54 goals and 45 assists in 201 appearances for the Reds before being sold for a colossal £142m in January 2018 to Barcelona. Sir Alex Ferguson signed Saha from Fulham in January 2004 for around £12m. The French striker made an immediate impression, scoring on debut against Southampton before netting twice in 4-3 win at Everton in his second match.

Saha managed seven goals in 12 Premier League games in the second half of the 2003/04 season. He didn’t maintain that strike-rate, but still scored a respectable 42 goals in 124 games before leaving for Everton four years later.

HAVE YOUR SAY! Which January signing has made the biggest immediate impact? Comment below.

Defoe was the ultimate goal guarantee in the January transfer window. First signed by Tottenham for £6m in January 2004, Defoe scored four goals in his first three games – thrillers which finished 4-3, 2-4 and 4-4.

When he left for Portsmouth in January 2008 for £7.5m he continued the trend, scoring on his debut against Chelsea and managing eight strikes in his first seven Premier League games. When he returned to Spurs in January 2009 he kept it up, scoring three in his first five games.

Van Dijk joined Liverpool from Southampton in a £75m deal back in January 2018. Unlike most of the names on this list, he doesn’t have impressive goal scoring statistics to back up his inclusion. But the Dutch centre-back’s impact was just as good – he immediately shored up the Reds’ defence with his commanding presence and leadership. Four years on and he’s helping guide Liverpool towards a quadruple.

Cole’s move from Newcastle to Manchester United in January 1995 was hugely controversial, with Magpies fans furious at Kevin Keegan for allowing it to happen. United paid a British record fee of £6m plus Keith Gillespie for the striker and were rewarded with 12 goals in 18 Premier League games from Cole in the second half of the season. Liverpool’s record of successful January signings includes the addition of Sturridge from Chelsea for £12m in 2013. Sturridge scored in each of his first three games for Brendan Rodgers’ side and racked up 12 in 18 games in the second half of the 2012/13 season for the Reds.

Such an impact was nothing new for Sturridge, who also scored on his debut for Bolton after being loaned there in January 2011. In fact, the England striker netted in first four games with Wanderers and managed eight in 12 altogether.

Cisse is the proud owner of one of the best starts in Premier League history. After joining Newcastle from Freiburg in January 2012 the Senegal striker became an immediate hero on Tyneside by scoring on debut vs Aston Villa. He then proceeded to bag 13 goals in his first 12 games for the Toon, striking up a brilliant partnership with his compatriot Demba Ba.