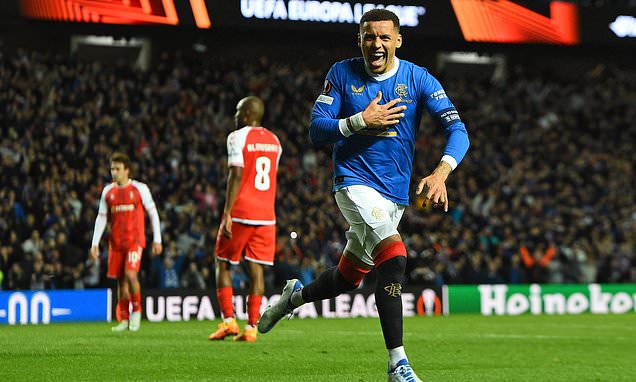 Leipzig awaits. So, too, does a shot at history. A European journey four years in the making now stands on the brink of bestowing a special status on this group of Rangers players.

It might be the last hurrah for some. With key men out of contract in the summer and others entering their final year, the squad that restored the Ibrox club’s continental reputation seems to be reaching the end of its cycle. If so, what a standard they have set for those who will follow them onto this stage.

Last season’s league title may be the achievement most readily recalled, but the Europa League is where Rangers have most consistently shone ever since Steven Gerrard first drove up the M6. Fifty-nine games played, 20 countries visited, 106 goals scored. 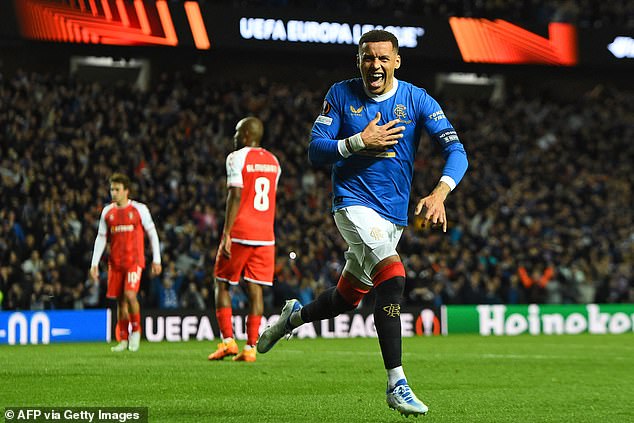 Their biggest Thursday night yet initially produced a performance to match. Braga were blown halfway back to Portugal by a whirlwind opening period. Without Alfredo Morelos, it was left to James Tavernier — who else? — to summon the gale. The captain has been here every step of the way.

Anxiety edged in as chances to kill the tie were passed by. When centre-back David Carmo then headed 10-man Braga level on aggregate, extra-time threatened to be a trial of endurance.

Enter Kemar Roofe. Coolly finishing from close range, having twice been denied by VAR, he gave his side the progression they richly deserved before Braga were further depleted by a second red card.

RB Leipzig will be tougher, much tougher, but the opportunity is there for Rangers to reach a first European final in 14 years. It’s a position worthy of huge praise. And one that was far-fetched, to the say the least, when this of all began. 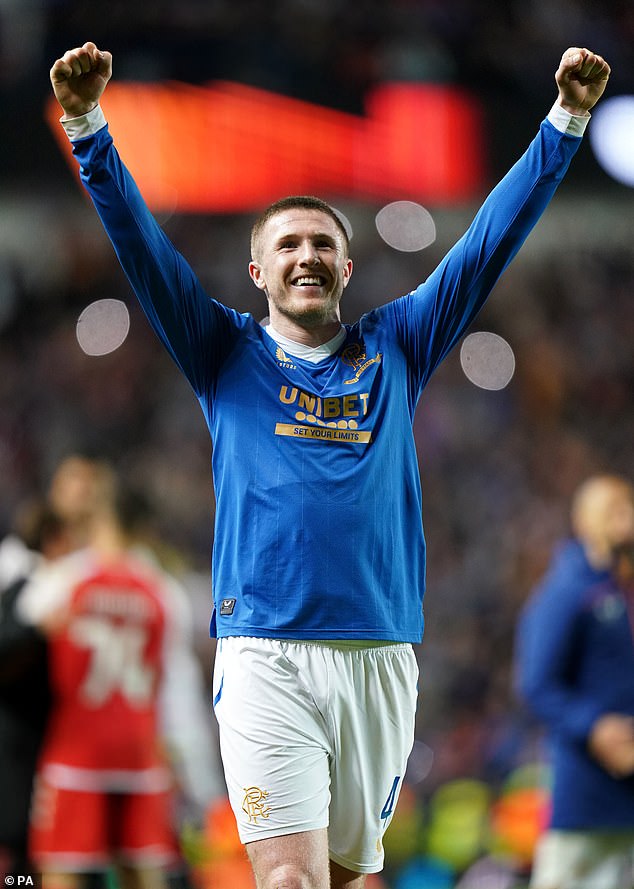 Seven of those involved in Gerrard’s first-ever European match — a 2-0 win over Shkupi of Macedonia on July 12, 2018 — are still on the books at Ibrox. Others were added as that season progressed. Key men such as Joe Aribo and Ryan Kent were signed to permanent contracts the following year.

In addition to substantial investor funding, income earned from the Europa League was integral to the talent pool deepening. Another £2.3million in UEFA prize money was banked last night. It was all done from a standing start. Or a standing-in-a-bush start. Back in July 2017, Pedro Caixinha was left picking twigs out his shoes after trying to explain how Rangers had been humiliated by Progres Niederkorn in Luxembourg.

The picture at the end of that campaign was bleak. Scotland sat 26th in the UEFA co-efficient rankings. The nation lagged behind Bulgaria, Azerbaijan and Cyprus — and only marginally ahead of Belarus and Kazakhstan. 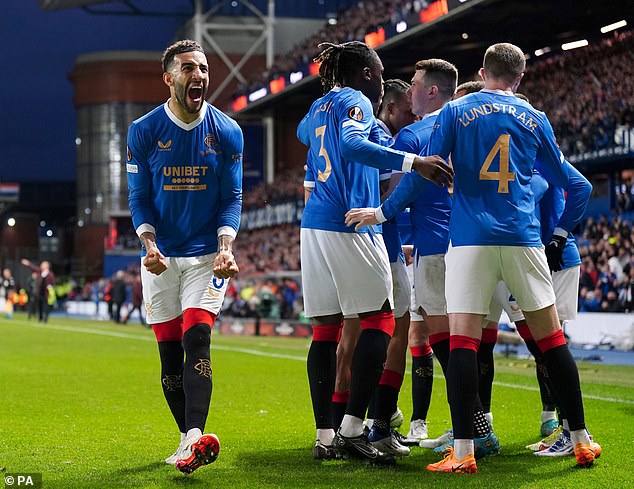 Thanks in no small part to Rangers’ subsequent restoration — going from group stage to back-to-back last-16 places and now the semi-finals — the ranking steadily rose. To 20th, then 14th, then 11th and onto ninth.

It’s delivered an opportunity for the Premiership winners to gain direct entry to the Champions League, albeit that Villarreal’s presence in the semi-finals of this season’s tournament may yet cast a degree of doubt on the prize.

There’s an irony in Rangers’ domestic failings since the winter break likely making that of only academic interest to them. Of course, the other route to the big time is winning the Europa League. Giovanni van Bronckhorst’s men will unquestionably be the outsiders of the four semi-finalists. But they are still there.

Van Bronckhorst has taken Gerrard’s work in Europe and elevated it to a new level. Borussia Dortmund, Red Star Belgrade and now this. The conundrum of why they can fall so flat against Scottish opposition remains, yet that cannot diminish the scale of the achievement when faced by foreign foes. 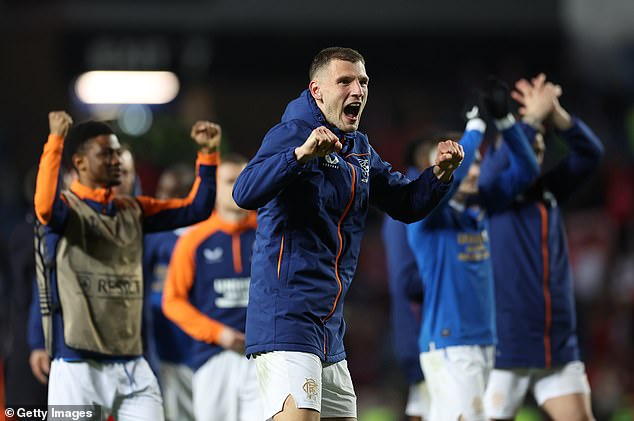 Braga have now been scalped twice in the space of three seasons. Last night’s nerve-straining success carried by far the greater significance, though.

Speaking in the wake of their 1-0 first-leg win, Braga manager Carlos Carvalhal made great play of his youthful side handling the heat of the Ibrox atmosphere. Words are one thing. Actions another. As the stadium vibrated amid soaring decibels at kick-offs, Carvalhal’s players soon bore scorch marks.

This place became an inferno after little more than 70 seconds of play. A Borna Barisic cross was helped on by Joe Aribo for Tavernier to slide into the net. 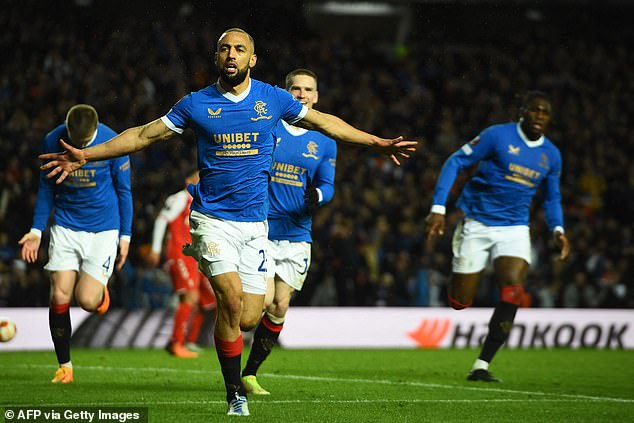 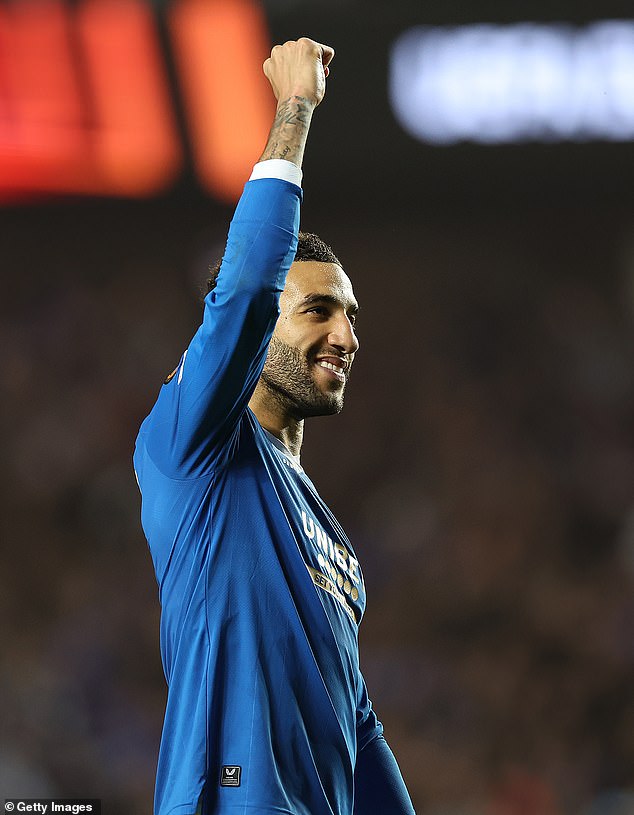 Not much had been seen of Barisic since he was hooked at half-time in the 3-0 dismantling suffered at Celtic Park in February.

A promising showing against St Mirren last Sunday offered signs of a rebirth and here the Croatian started like the player of old. His left foot remains a fearsome weapon, capable of arcing the most majestic of deliveries into the opposition penalty area.

It delivered onto the head of Roofe in the fifth minute only for a VAR intervention to quell wild delight when the striker sent the ball into the net. The handball call against Barisic felt harsh, but such is the modern game. 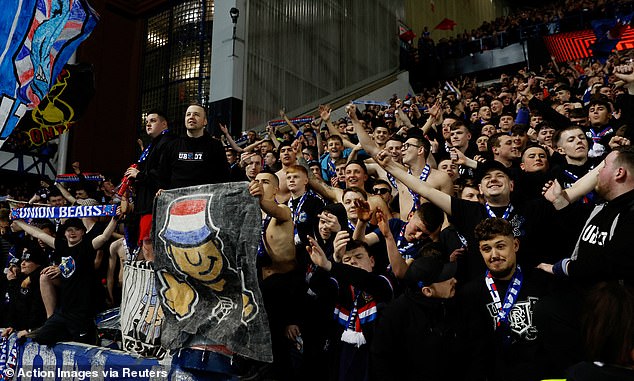 Rangers’ play brimmed with a directness and dynamism that was fraying the edges of Braga’s composure. Barisic was key to it. By the half-hour mark, Ibrox was chanting his name with vigour.

Plenty more were rising to the occasion. It felt like every 50-50 was being won by those in blue.

Tavernier’s penalty and Vitor Tormena’s red card then looked to have sorted it. We should have known better.

After four years of excitement, Rangers saw fit to create a little more by allowing Braga to extend the tension. Ultimately, though, joy and relief prevailed. The journey continues.

Harry Kane injury news: What is Tottenham’s record without Kane and how will Mauricio Pochettino adapt?