The bright light of the Olympics spotlight looms for the Matildas but coach Tony Gustavsson says they will embrace it, rather than shrink away.

Women’s football, alongside softball, will commence its tournament before the Tokyo Games opening ceremony – meaning the Matildas’ first group match against New Zealand on Wednesday night will be prime viewing.

It is also the first time the world No.9 Matildas will be watched by a large audience in a hospitable time zone under Gustavsson, after five previous friendlies in charge.

“Just spontaneously my reaction is: what a great opportunity for us, to play with that spotlight on us and feel that,” Gustavsson said.

“We want to play our best when the best is needed and also that opening game is one of the most important games for us.

“We’re only focused right now on that opening game, because that’s what we need to do then once that’s finished, we then focus on Sweden and then when that’s finished we focus on the US. 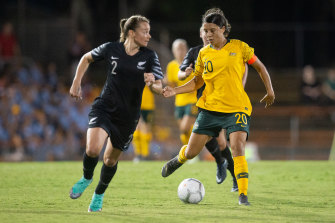 Samantha Kerr (right) and the Matildas take on New Zealand’s Football Ferns to open their Tokyo 2020 campaign on Wednesday night.Credit:Getty

“… To have that feeling that ‘OK, let’s go, let’s do this’ and feel that we have the country behind us, phenomenal – that’s just gonna give us even more energy.

“Even though this team have a lot of energy already, that’s going to give us even more.“

The Matildas have a dominant record against the Football Ferns, with 30 wins, six draws and seven losses against their trans-Tasman rivals, who have had a limited build-up in terms of friendly matches. 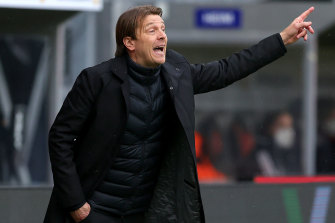 The Matildas are still yet to taste victory under new coach Tony Gustavsson.Credit:Getty

Australia are hunting their first victory under Gustavsson and realistically need three points before facing world No.5 Sweden and the top-ranked United States if they’re to progress from group G.

The top two teams from the three groups, and the two best-ranked third-place finishers, progress to the quarter-finals.

Key for the Matildas will be getting their Sam Kerr-led attack up and running.

The Chelsea star is goalless in five friendlies under Gustavsson but he lauded her leadership and compared her intensity to Marta, Abby Wambach, Caroline Seger and Ola Toivonen.

“(Kerr) can be the funniest, most energised, high-energy, spreading energy and positivity around her in one second,” he said.

“But then it’s business the next second – she has switched on, and she demands everyone around her to be switched on as well because now it’s go time. The ability to turn on and off that quickly is a unique skill set for the best athletes and the best leaders and she has that.”

Boom teenagers Mary Fowler and Kyra Cooney-Cross have provided a spark in recent friendlies though Gustavsson was keen to take some of the pressure off the youngsters.

“They are these young, energetic, sparkling, free-from-fear players that come in and do their thing when they get the playing time,” he said. 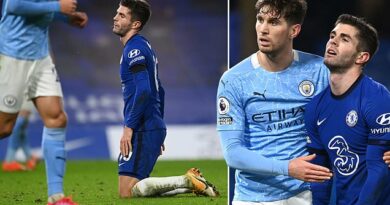