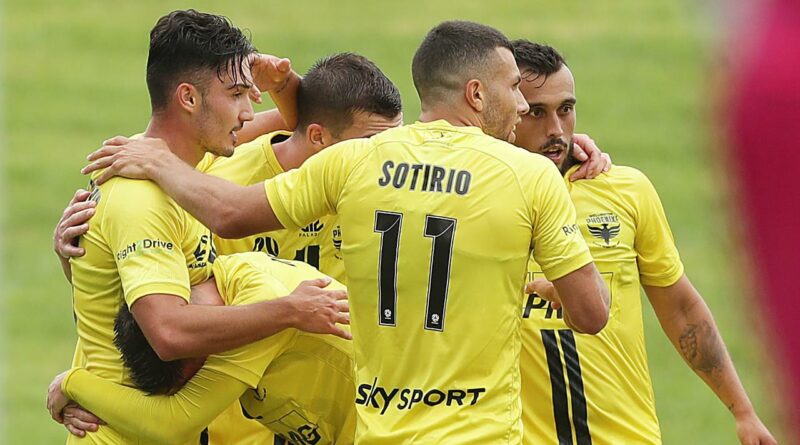 Stunning strikes from Calem Niewenhof and Luke Brattan either side of the break were enough to give the Sky Blues a 2-1 win over Wellington Phoenix.

They were made to work hard for the victory, but the result was still a statement to the rest of the competition from Sydney, who are on a quest for the A-League’s first ever three-peat.

The Nix threw everything at Sydney in the final, nailbiting 20 minutes of the game, but left Wollongong’s WIN Stadium – their home away from home this season – with no points to show for their efforts.

It had been a fairly even contest, particularly in the first half, until the defending champions went in front.

And Calem Niewenhof’s strike was worthy of Sydney’s first goal of the season. The 19-year-old debutant unleashed a thunderbolt off his right boot that flew into the top corner to give the Sky Blues a deserved lead on the half-hour mark. Steve Corica will be delighted with Niewenhof’s performance.

It was a fast-paced game, with the Nix defending admirably. But there was nothing they could do to stop Niewenhof’s strike.

They did, though, manage to level things up.

Is this the 2021 @ALeague goal of the year?
I'll never know. #WELvSYD 🤔 pic.twitter.com/sU09scVjjM

Wellington’s equaliser on the stroke of half time was unsighted, at least by those watching on TV. The goal may well have been a worldie from Mirza Muratovic, but the broadcast went black and viewers had to take Brenton Speed’s word for it until a replay was found.

Nevertheless, it was a sucker-punch for Sydney. They had dominated the latter part of the half and Wellington’s goal appeared to come from nowhere.

It wasn’t much of a setback for the Sky Blues, who took the lead again soon after the break when Niewenhof’s effort was upped by Brattan. Standing over a free-kick about 30 metres out from goal, Brattan smashed the ball with the outside of his boot into the top corner. Again, there was nothing the Phoenix could do about it.

But they came so close to snatching an equaliser deep into injury time, only for the VAR to correctly rule Tomer Hemed’s goal off-side.

📩 If anyone from the game has footage of Muratovic's goal, please email [email protected]

I heard we got two goals in that time….honest.

If no1 saw it did Wellington actually score ?#ALeague #SYDvWEL

They still haven't shown a replay of the goal even though they know everyone watching missed it. I love the A-league 🤣#SYDvWEL #ALeague

Technology is a wonderful thing, but it also has a knack of failing at the most inopportune moments. With Sydney in front just minutes before the break, Wellington equalised through Mirza Muratovic. But the broadcast went black, leaving viewers completely unsighted and it wasn’t until the second half that a replay of the goal was found. And it was a wonderful finish, just as Mark Bosnich had described, not hit with great pace, but into the bottom corner, and even Phoenix’s own social media crew made light of the situation on the club’s official Twitter account.

QUEST FOR THE THREE-PEAT

If ever there was a team capable of claiming a historic three-peat, it would have to be Sydney FC. Steve Corica’s side still have plenty of work to do, but they have the squad depth – as Calem Niewenhof showed – to give it a real go. Of course they are without record goalscorer Adam Le Fondre, but their re-signing of Brazilian Bobo is a shrewd one.

It was far from a complete performance against Wellington, but Sydney managed to absorb intense pressure at the end to hang on for a win.

It’s going to take a huge effort for Wellington to repeat their heroics of last season, when they recorded their highest ever finish of third. A few months on and they’ve lost key players, including Steven Taylor and Liberato Cacace, and the team has essentially been displaced. Because of COVID, the Nix will play the majority, if not the whole, of their season in Wollongong. It will be a unique challenge for them, and a difficult one.

Originally published asBroadcast blue: It was a goal … trust us