Home » Soccer » A-League to Bayern Munich: Singh ‘surprised as anybody’ by elevation

What caught Andy Hedge's eye when he first saw Sarpreet Singh play was his technical ability on the ball and the fact he played with his head up.

"He always knew what he was going to do before he got the ball," Hedge said of New Zealand's newest football superstar. "That just puts him a step ahead of the other players. Unfortunately when you've got a player like that at a very young age, a lot of the players around him of a similar age and experience don't have the same speed of thought as he does, so often he'd play passes that other players weren't ready for." 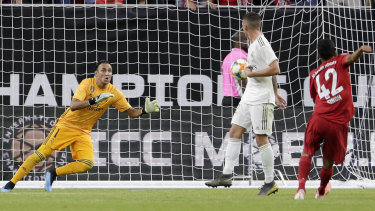 Sarpreet Singh strikes past Real Madrid goalkeeper Keylor Navas, but the goal was ruled out for offside.Credit:AP

"But when he went up to train with the first team, who were ready to receive those passes, he looked even better because those passes would connect. From a coach's point of view, when you see him play, he's got such an awareness around him of the space that is available, where he needs to take his touch to play the next pass."

Having signed with Bayern Munich II, the German superclub's reserve team, after a breakout A-League season where he tallied five goals and eight assists for the Phoenix, Singh was expected to begin his Bayern career away from the limelight in Germany's third division. But much to everyone's surprise, Hedge included, Singh travelled with the first team to the United States for the International Champions Cup pre-season tournament and played in all three of their matches; against Arsenal, Real Madrid and AC Milan.

Hedge has played an influential role in Singh's development. He coached the reserve team when Singh first joined Wellington Phoenix from Auckland club Onehunga Sports as a 16-year-old, who he joked weighed "35kg wet through". Although he could never guarantee any player would play professionally in the future – especially at a club the size of Bayern Munich, where Singh has signed a three-year contract – Hedge said Singh's potential was clear to see when he first arrived in the capital. 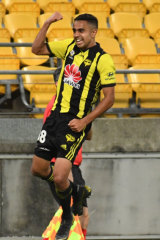 Sarpeet Singh needed just one season in the A-League before being picked up by Bayern Munich.Credit:AAP

"If you ask any coach honestly, of youth players in particular, they have no idea where they are going to get to and if they tell you they are going to reach the professional level then they're lying. Nobody knows. There's so many factors that go into it," he said.

"But what you do have is an inkling or a gut feeling that this lad is really interesting, he's got the technical and tactical ability, he's well-grounded enough, as we know Sarpreet is, and he's got a chance. A huge of amount of luck comes into play with the right game with the right scout watching, and obviously it must have been at the Under-20 World Cup where they've seen him play, and things happen really quickly when you're at that level."

Playing with and against some of the sport's biggest names, the 20-year-old totalled 93 minutes across the three International Champions Cup games, with his most memorable moment coming against Real Madrid. Singh turned in the box and fired a bullet shot past Keylor Navas but he was in an offside position when he received the ball and the goal was disallowed.

"I've had a few messages with him back and forth over the past couple of weeks and I think as much as anybody he's surprised at how quickly it has happened, but I guess it shows the quality that he's got.

"He's such a level-headed kid and his feet are firmly on the ground, he's not getting too far ahead of himself and I'm sure he hasn't gone out and bought a Louis Vuitton wash bag yet. He says 'I feel quite comfortable, I'm trying my best and I'll see where it goes', he's just a typical, humble, well-rounded Kiwi lad.

"When he moved up to the A-League he didn't look out of place and even playing against Real Madrid and Arsenal he was not looking a step out of place. I think that shows something is special in a player when they can make that jump up. Yeah he had a nervy 10 minutes against Arsenal, but he seemed at home and I'm sure he'll go on to play for the first team this season."

Hedge said Singh's move to Bayern is already inspiring the next generation of football players in New Zealand. He coaches his son's team and said all of the players are aware of Bayern's new Kiwi star.

"Before if you had said to them in a training session; who is Sarpreet Singh? Probably half would say 'doesn't he play for the Phoenix?' But now they all know and for those more serious footballers, it's given them such a kick to say you can do it. You can grow up in Onehunga and play for Bayern Munich."