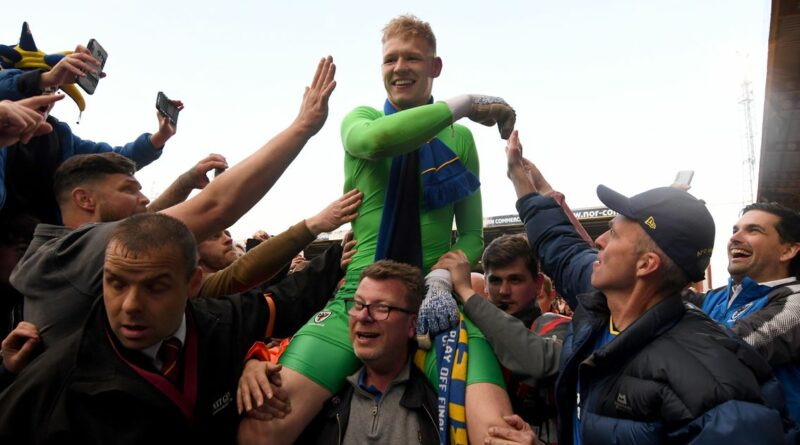 When Arsenal pulled AFC Wimbledon out of the hat in last month's Carabao Cup draw, it looked like a dream reunion was on the cards for Aaron Ramsdale and Wimbledon.

Ramsdale spent just over four months with the Dons in a loan move from his old club Bournemouth back at the tail end of the 2018/19 season.

During his short 20-game spell in yellow and blue, Ramsdale etched his name into Wimbledon folklore forever – playing a pivotal role in one of the greatest escape's from relegation in recent memory.

But, such has been Ramsdale's rise to prominence since his short stint in Merton, the England goalkeeper is now not expected to feature against the Dons on Wednesday night after his recent breakthrough under Mikel Arteta.

Wimbledon looked dead and buried at the bottom of League One when Ramsdale arrived in the January transfer window – Wally Downes' side were five points adrift from safety.

Even in mid-February, that gap had increased to 10 points.

But a string of inspirational performances from Ramsdale helped catapult the Dons to a remarkable fightback, where they secured survival in a pulsating 0-0 draw away at Bradford City on the final day of the season.

It's not an exaggeration to say that Ramsdale was the difference between staying up and going down.

Can AFC Wimbledon shock Arsenal in the Carabao Cup? Comment below.

During the run-in, Ramsdale produced goalkeeping masterclasses in the draws with Oxford United and Luton Town on the road to tee up their final day shoot-out in Bradford.

“He came in and lifted the place straight away," former Wimbledon boss Downes told The Athletic last year. "At times, I had to tell him to shut up. There was one game where he came in at half-time all excited.

“I told him to calm down but he just kept talking. Eventually, I had to say, ‘Rammers, f*****g shut up and sit down’. Straight away, he was, like, ‘Sorry boss’. But I loved it. You want that as a manager. You don’t want a team of shrinking violets.

“He helped get the fans back on side, they could see he had really bought into the club. His family would be in the bar afterwards, chatting away. It is a small club at Wimbledon but they fitted in brilliantly.”

It wasn't just on the pitch that Ramsdale impressed though, as he struck up a genuine rapport with the fans away from games.

As soon as the final whistle went at Valley Parade, Dons fans stormed the pitch – and Ramsdale was in the thick of the celebrations.

"I had fans kissing me and trying to take my clothes, my shirt and my shorts. The camaraderie in the dressing room was amazing," Ramsdale told AFC Bournemouth back in May 2019.

“When I went there, a lot of people had already written us off.

"We were 10 points adrift in mid-February, so it was a huge achievement to stay up.

It's very rare that players on loan strike up a genuine affinity for their temporary club. But that's definitely proven to be the case for Ramsdale and Wimbledon.

The 22-year-old struck a great rapport with younger fans off the pitch and has gone back to visit his old team-mates on various occasions when the opportunity has presented itself.

And that adulation has been reciprocated by Wimbledon fans since Ramsdale's departure.

Despite making just 20 appearances for the club, Ramsdale won the club's young player of the year award – and was even emphatically voted into the Dons team of the decade last year.

His loan spell in Merton proved to be the catalyst for him to establish himself as the first goalkeeper at parent club Bournemouth, who were a Premier League club at the time.

Since then, Ramsdale secured a big bucks move back to Sheffield United, where he began his career as an academy graduate, before his £25m move to the Gunners this summer.

Despite criticism from some fans online, it's seemingly taken Ramsdale less than a month to dislodge regular stopper, Bernd Leno.

Ramsdale has started, and kept clean sheets, in Arsenal's last two games as Arteta bids to turn around a torrid end to the season.

His rapid rise is likely to deny him a reunion as the Gunners prepare to lock horns with Mark Robinson's free-scoring Dons side.

But whether on or the pitch, Ramsdale will certainly be serenaded by 9000 lovestruck Wimbledon fans whatever the outcome on Wednesday night.