Aberdeen 2-4 Rangers: Alfredo Morelos nets twice before getting sent off in feisty clash as Steven Gerrard’s side extend gap over rivals and keep pace with Premiership leaders Celtic

Make no mistake, this was a huge and ballsy Rangers win. Against a dogged opponent victory at Pittodrie prevented bitter rivals Celtic disappearing over the horizon in the Scottish Premiership while highlighting once again the enigmatic, schizophrenic side of striker Alfredo Morelos.

For 54 minutes here the Colombian international was virtually unplayable. He scored two superbly-taken goals and menaced Aberdeen’s defence to the point of distraction.

Yet when Morelos plays against Aberdeen he has a damaging tendency to see red. On the opening weekend of the season a petulant clash with Dons defender Scott McKenna resulted in a dismissal after 12 minutes, later rescinded on appeal. 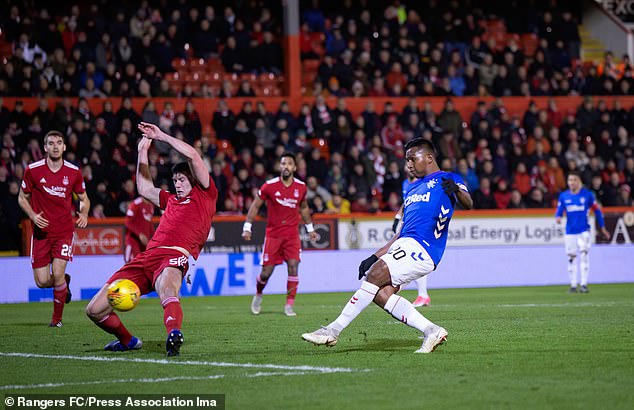 It was an eventful night for Alfredo Morelos, who scored twice before being given straight red 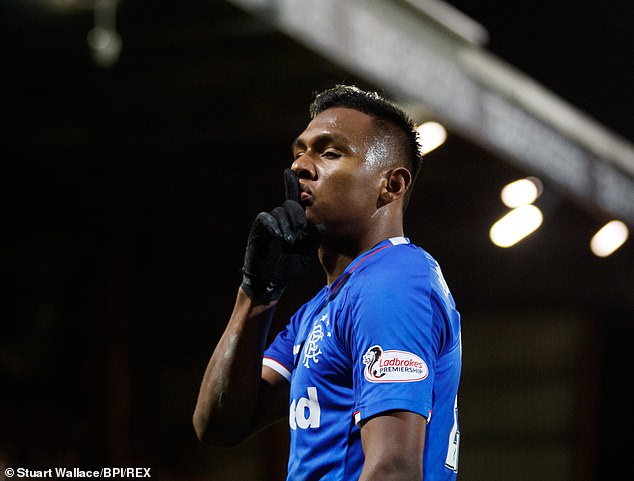 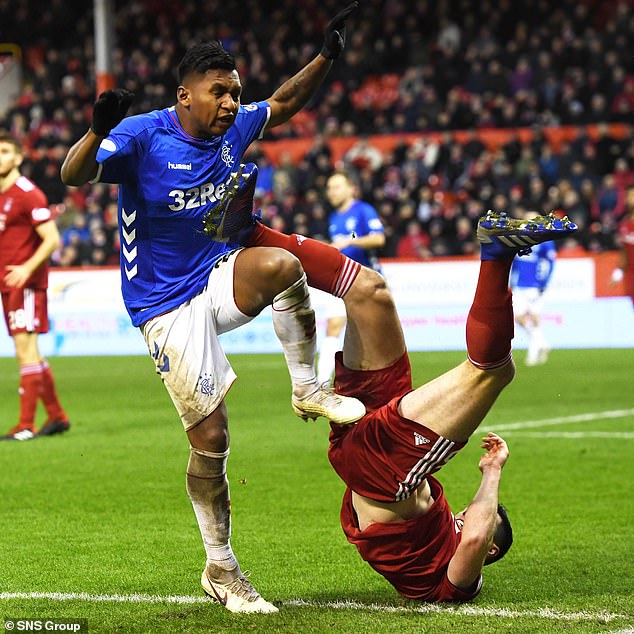 When the teams played at Ibrox in early December he was sent off once again, this time for two yellow cards. Remarkably, lighting struck for a third time nine minutes into the second half of a typically frantic, tempestuous and engrossing clash between two bitter rivals.

To say Morelos was entirely to blame would be unfair. Once again a clash with McKenna was the catalyst, the defender kicking out before the South American retaliated by planting a boot in a sensitive region of the Scotland defender’s anatomy.

The red card for McKenna from referee Bobby Madden was swift. Prostrate on the ground receiving treatment, it took time for Morelos to rise to his feet. The final outcome was the same.

The first half was a breathless affair of four goals. By scoring three of them Rangers placed themselves in a match-winning position; albeit one a little too close for comfort in the dying stages. 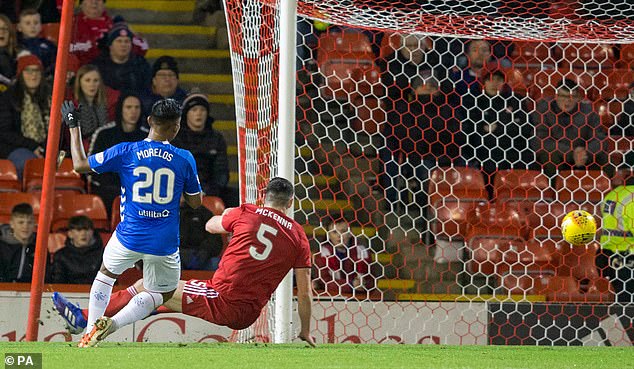 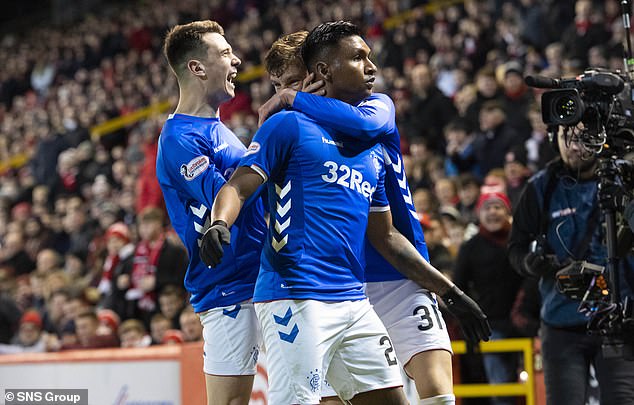 Morelos celebrates alongside his Rangers team-mates after netting against Aberdeen 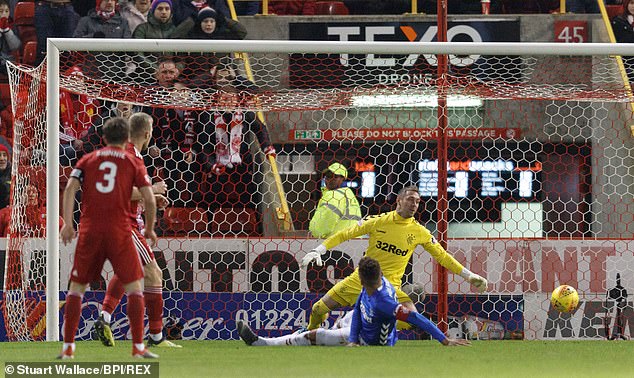 It didn’t take long for Aberdeen to level things up; Sam Cosgrove fired past Allan McGregor 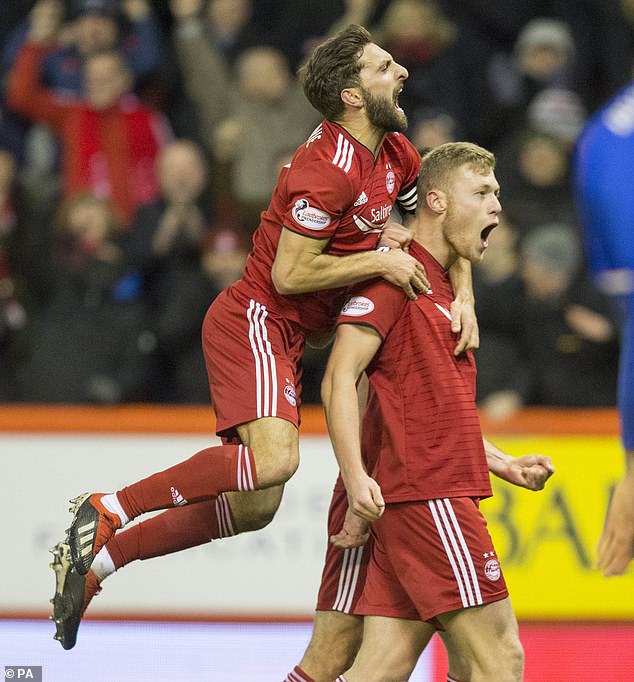 In those opening 45 minutes we witnessed the gifted side of Morelos; the fine footballer of formidable finishing prowess. So often missing against the Pittodrie side this season, the South American looked unplayable. Aberdeen finally learned what Rangers had been missing.

Morelos looked in the mood from the moment he dragged a low shot wide of the far post in 15 minutes. Already three minutes longer than he lasted before being sent off on the opening day of the season – the card was later rescinded – he was merely finding his range.

Ryan Kent created space for a thumping right-foot angled shot with his direct running and pace four minutes later. Dons keeper Joe Lewis pushed the ball away unconvincingly, but only as far as Morelos, the Colombian calmly slotting the ball into the net from 10 yards.

Aberdeen had been here before. On that opening weekend Bruce Anderson’s late strike earned a 1-1 draw and this time the home side responded a good deal sooner.

It took half an hour for Sam Cosgrove to continue his impressive run of goals.

Good work by Greg Stewart on the right flank ended in a cross being headed clear by Connor Goldson, back in the Rangers starting line-up after injury. The ball landed at the feet of Lewis Ferguson, the midfielder’s first time volley once again blocked by Goldson before falling perfectly for Cosgrove to slot low into the bottom corner of the net for Aberdeen’s equaliser.

For Rangers the game was in danger of falling into a damaging pattern. An early recent goal at Kilmarnock did nothing to prevent a self-inflicted defeat. The questions asked of the Ibrox side’s mentality that night were swiftly answered here. 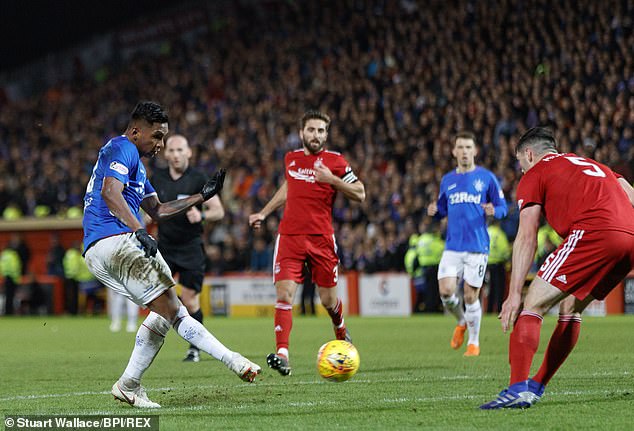 Morelos was again on the scoresheet to put Rangers back in front, before celebrating wildly 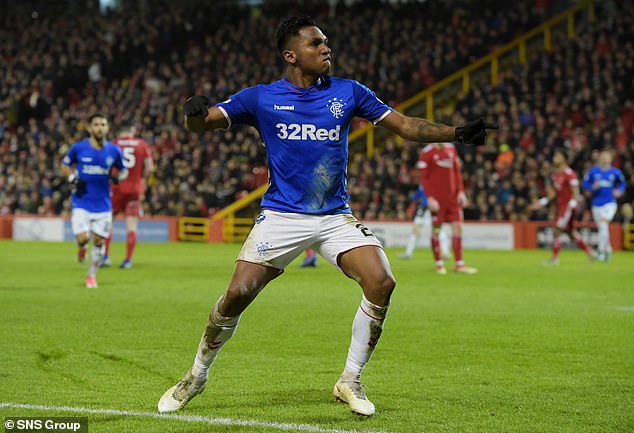 Morelos enjoyed scoring against Aberdeen, who he had twice been sent off against this season 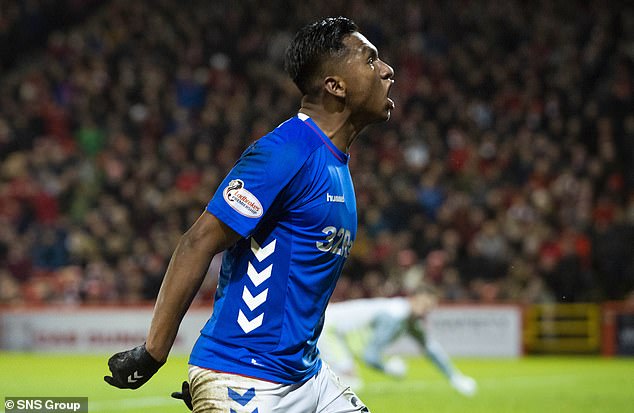 Ryan Kent was again instrumental in the 37th-minute strike which regained the lead, linking the attack after driving midfield play from Ryan Jack. Yet the key figure, once again, was Morelos.

The space afforded to the Rangers top scorer by Aberdeen on the edge of the 18-yard box was suicidal, Tommie Hoban standing off long enough to allow the striker to pass a delightful, sublime finish calmly into the bottom right-hand corner of the net.

Following the rancour and fall-out of the weekend it was almost pre-ordained that Rangers would win another penalty – their 10th of the season. Yet there could be no arguing with this one.

With three minutes to the interval James Tavernier’s cross was flicked towards the penalty spot by the head of Goldson. What happened next was inexplicable. Scott McKenna won’t look back on the night with fond memories after throwing his arm inexplicably into the air to claim for a non existent free-kick just as the ball came in his direction.

It was a clear spot kick and James Tavernier, placed in the bizarre situation of taking his fourth penalty in two matches, swept it into the net for 3-1 despite Lewis getting a hand to the ball.

It was natural to think, then, that Rangers had the points in the bag. Natural, but premature. 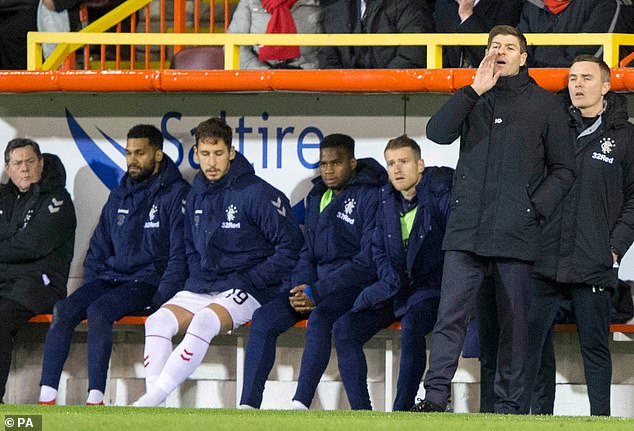 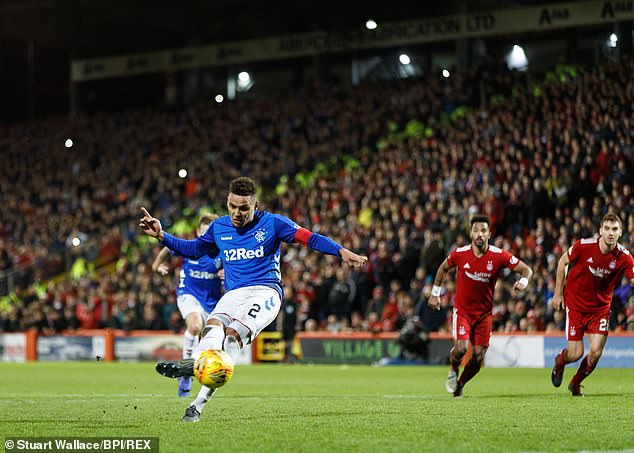 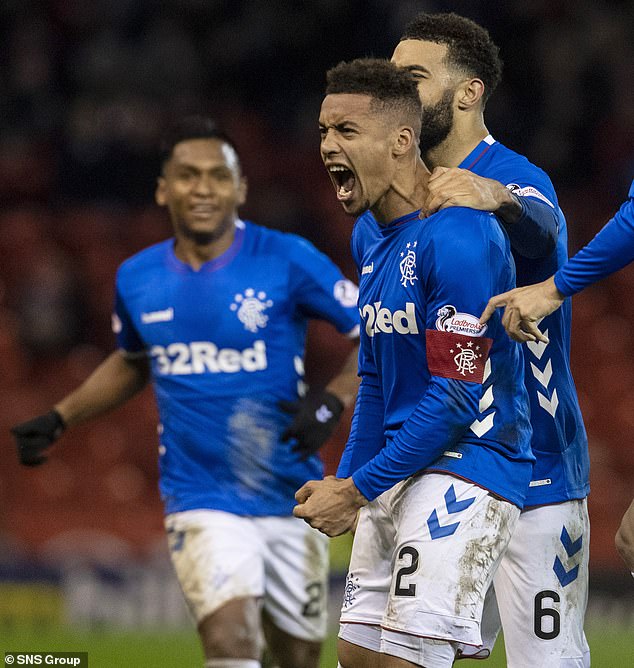 Full back, and Rangers captain, Tavernier celebrates with his team-mates after his goal

Within two minutes of the restart Aberdeen had a penalty kick of their own. This time Tavernier conceded it rather than scoring. Again, it was a solid decision by referee Madden.

Trying to defend an Aberdeen corner the Rangers captain wrestled Lewis Ferguson to the ground. The Rangers protests were lengthy, but pointless. Despite the delay, Cosgrove slotted his 12th goal in 13 games from 12 yards. The home side were back in the game.

Moments later Morelos could have sealed the points after creeping in behind the Aberdeen defence to go one on one with Joe Lewis. Credit the Dons keeper for spreading himself and making himself big.

Buoyed by the escape Gary Mackay-Steven’s twisting, turning solo run came to within inches of making it 3-3 after 53 minutes, the winger’s effort flashing wide of the upright. 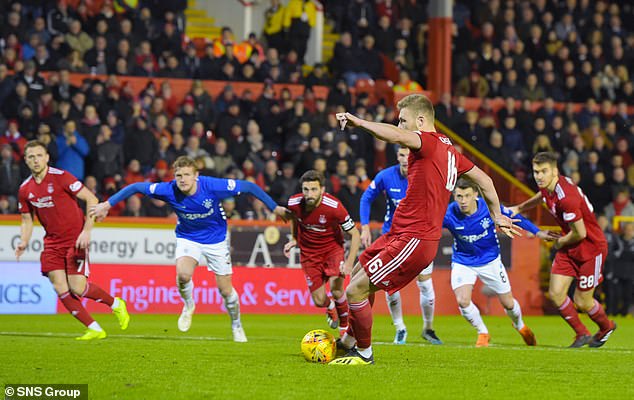 Tavernier then gave away a penalty at the other end, which was duly dispatched by Cosgrove 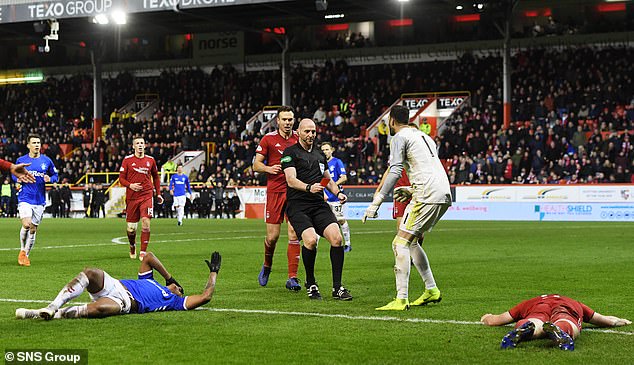 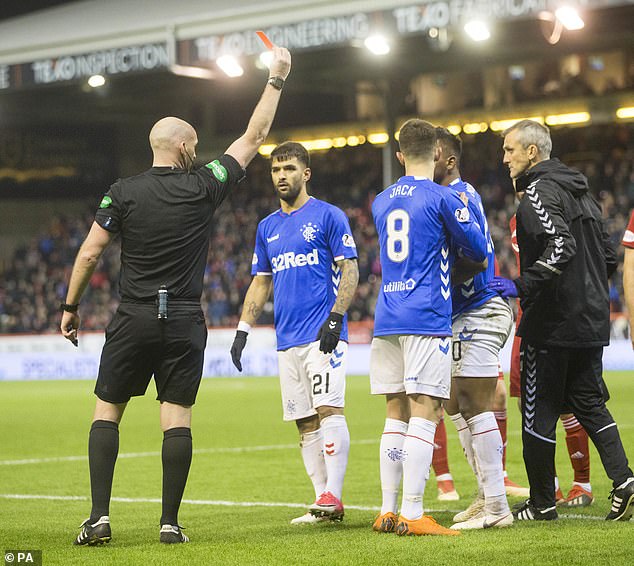 Morelos’ straight red was his third sending off against Aberdeen this season, and fourth overall

Oddly, the red cards removed much of the sting from a game building up quite a head of steam, chances at a premium until the final stages of the game. The time needed to treat – then red card – Morelos prompted seven minutes of injury time.

Greg Stewart was denied a leveller when his snap-shot through a crowd of bodies was pawed away by Allan McGregor in a crowded area.

Aberdeen’s hopes were finally extinguished in the 94th minute. A swift Rangers breakaway ended with a Tavernier pass to Jermain Defoe, a substitute for Daniel Candeias with 70 minutes to play.

With one steadying touch the former England striker smashed the ball past Lewis to scenes of jubiliation and joy in the Rangers technical area. They, as much as anyone, knew how big a win this was. 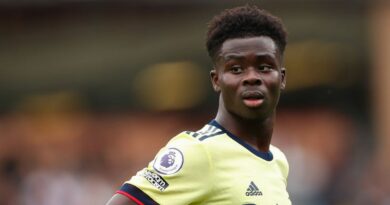