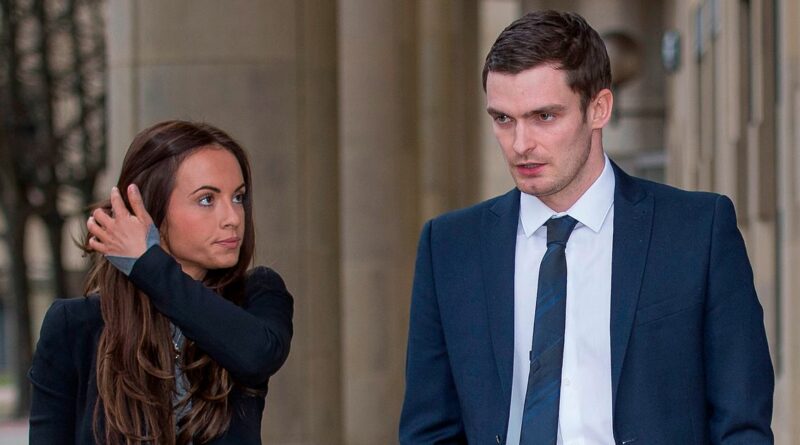 Adam Johnson's girlfriend appears to be selling what are believed to be the ex-footballer's clothes on Depop.

The former England winger, who has been without a professional club since his 2016 conviction for sexual activity with a 15-year-old girl, even appears to be modelling some of the items in the pictures.

The Sun report girlfriend Stacey Flounders is trying to flog the second-hand gear on the clothing site to make some extra cash.

The Depop account, which reportedly belongs to Stacey, features an advert for a navy blue Dolce and Gabbana tracksuit on sale for £120.

A barely-visible picture shows a skinny man modelling the item, although his face is not visible. "She’s clearing out his old stuff and he’s a regular visitor to the house so he can see [their child] so he offered to wear the gear so buyers could get a better idea of how it fits."

Since-deleted pictures also show the same man modelling a £50 D&G sweat top with an asking-price of £50, according to the same friend.

Stacey's Depop account is also said to have featured a grey hoodie up for £55, a black jogging suit that fetched £75 and a men’s Balmain hoodie sold for £130. The couple initially split after Johnson was convicted of sexual activity with a 15-year-old girl five years ago.

However, earlier this month the Sun revealed Johnson and Flounders had reunited and were giving their relationship another go.

Ms Flounders initially vowed to stand by him when he was arrested – but that changed when she learned the extent of his betrayal during his 14-day trial.

At one stage during the trial, she told the court: "I realised who Adam really was – an arrogant man who lied and lied to me. It destroyed me. I wanted to get up and punch him. He’d humiliated me."

During Johnson's trial, the jury heard that he had been texting other women.

The jury also heard how Johnson arranged to meet the 15-year-old Sunderland season-ticket holder in his Range Rover with a pair of signed shirts.

He later messaged her a series of flirty texts and requested a second meeting.

Jurors were told how Johnson and the girl had swapped 834 texts over two months.

Bradford Crown Court heard Johnson suggested they should get into the back of the car and said he wanted to get her jeans off.

Johnson continues to be shunned by the footballing world, despite being released from jail in 2019.

Daily Star Sport has reached out to Stacey Flounders' representatives for comment.