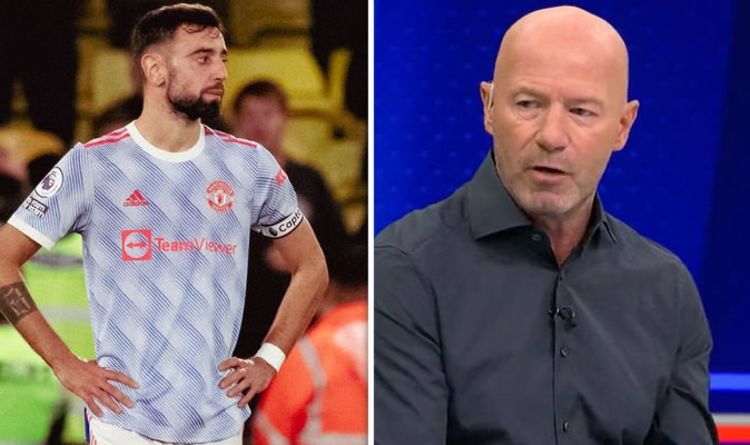 Manchester United midfielder Bruno Fernandes has been labelled “embarrassing” by Alan Shearer following his post-match reaction after the 4-1 loss to Watford on Saturday. Fernandes signalled to the disgruntled United supporters at Vicarage Road that the blame for their poor form should not be all on the head of Ole Gunnar Solskjaer. However, just over 12 hours later, Solskjaer was no longer in a job.

United sacked Solskjaer on Sunday morning after a run of one win in seven Premier League matches.

The Red Devils are already 12 points behind league leaders Chelsea.

Shearer says Fernandes is right to say Solskjaer should not be to blame for every negative at the club.

But the pundit claims the likes of Fernandes should have shown more fight on the pitch to help Solskjaer keep his job.

“It’s pretty embarrassing from Bruno Fernandes because they have the chance to save the manager’s back so for him to blame all the players – absolutely,” Shearer said on Match of the Day.

“It’s clear to see from their attitude and performance that the players don’t want the manager.

“But the players can go out and have effort and attitude so that tells you what they think of the manager. That’s not the first time we’ve seen players stop running for the manager and it won’t be the last time.”

After the match, Fernandes explained why everyone at the club has to take the blame for this season’s results.

“In the Premier League it is not enough playing for just one half,” the Portuguese said.

“Watford has a good team. They are aggressive, they have quality up front, and if you give them chances you will concede goals. And that has been a problem with us for many games.

“I think the attitude in the second half was there. In the first half it was too sloppy from everyone.

“We don’t go on the front foot, we don’t tackle.

“You have to show your quality and that is why you play for Manchester United. It’s everyone’s fault here. It’s not the coach, it’s not one player, it’s everyone.