‘I’m still trying to figure out why this was a penalty’: Alex Scott questions spot kick decision for Denmark against England as pundit ‘can’t see what the referee is seeing’ in punishing Kyle Walker

Alex Scott has questioned the decision of referee Jesus Manzano to award Denmark a penalty during UEFA Nations League clash with England at Wembley on Wednesday.

The Danes were handed the spot kick after the Spanish referee deemed that Kyle Walker had committed a foul in his own 18-yard box after questionable goalkeeping from Jordan Pickford.

Former Spurs star Christian Erisken stepped up and made no mistake in dispatching from 12-yards to net on his 100th appearance for his country. 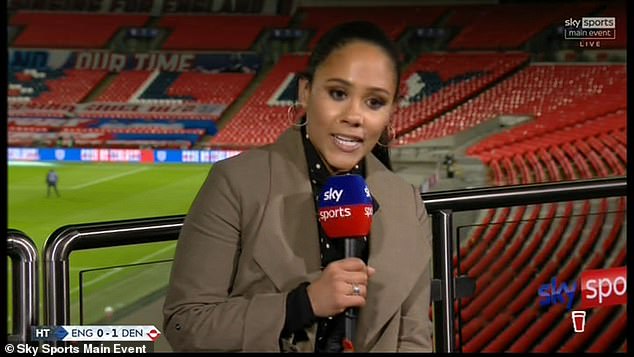 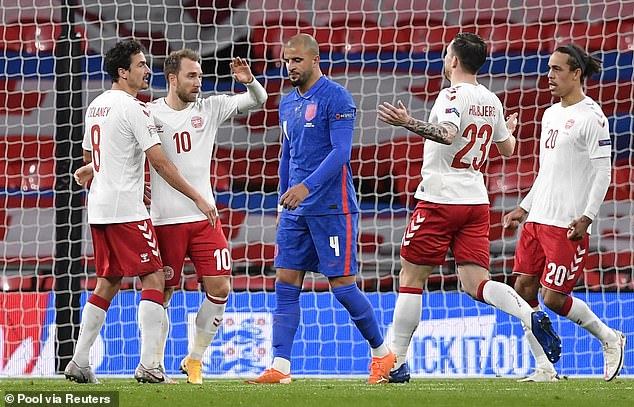 But Scott found it difficult to understand why Manzano had awarded the penalty against England, who had been looking to extend their good form following Sunday’s win over Belgium.

‘Im still trying to figure out why this was a penalty,’ Scott said on Sky Sports. ‘I don’t know why he has rushed out for the ball.

‘I can’t see what the referee is seeing there, it was absolutely not a penalty.’ 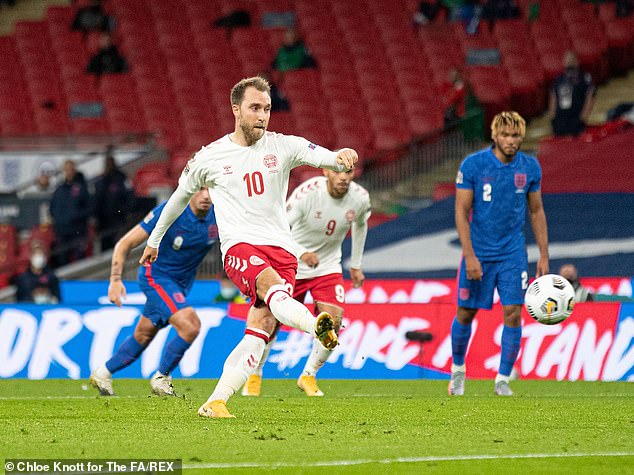 Jamie Redknapp revealed that the penalty was the result of a ‘mad’ spell of the game in which Harry Maguire was dismissed for a reckless challenge on Kasper Dolberg.

‘It was a mad three or four minutes,’ he said. ‘I think everyone was in a tumble dryer, all the decisions were completely wrong. But when we settled down we sometimes looked better with ten men.’

England face a tough task in wrestling back the lead after Maguire was sent off for a second bookable offence.

Gareth Southgate’s side risk losing their grip on their Nations League group with Belgium looking to earn top spot out of the four teams.

Dolphins’ decision to start Tua Tagovailoa over Ryan Fitzpatrick is right, but timing is wrong

On a hot mic, Joe Buck and Troy Aikman reveal how fake the NFL’s patriotism is