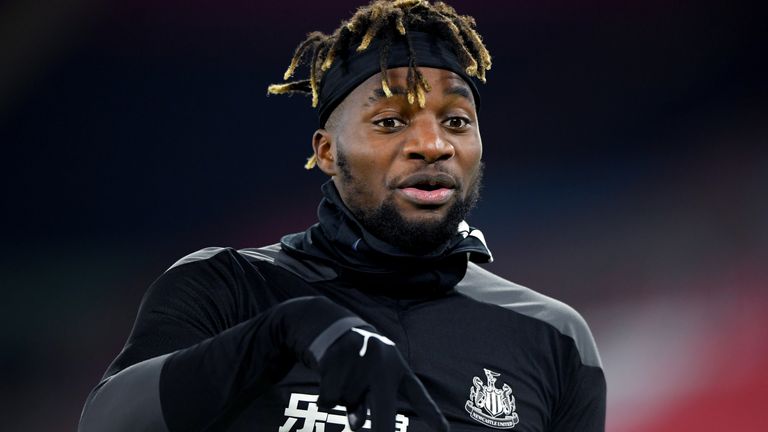 The Frenchman last played for Newcastle against Chelsea on November 21, after which a coronavirus outbreak at the club meant their training ground had to be closed and their December 3 fixture against Aston Villa was postponed.

The club confirmed later in December that both Saint-Maximin and club captain Jamal Lascelles had failed to return to action as they struggled with symptoms of the virus.

Lascelles made his return against Arsenal in the FA Cup last weekend, and now Saint-Maximin is closing in on a return of his own after the club confirmed his participation in training by posting photos on social media.

“The winger has been suffering from the long-term effects of Covid-19 for the last few weeks and there’s no doubt that United have missed the flying Frenchman in the last 10 matches.

“But he was able to step up his return with some running drills and ball work with rehab fitness coach Cristian Fernández, while his team-mates prepared for Monday night’s Premier League game at Arsenal.”

Saint-Maximin expressed his excitement at returning to training on his own, with a post saying: “I’m back baby.”

The 23-year-old also interacted with fan responses to his post, thanking supporters for their “kindness” and insisting, “I feel good don’t worry”. Saint-Maximin’s return to training comes a week after the club denied that he had breached quarantine regulations, having been photographed in a supermarket with a fan after returning to Newcastle from France over the festive period.

Newcastle have struggled in Saint-Maximin’s absence, failing to record a victory in their last six league games while also exiting the Carabao Cup and FA Cup during that time.

The poor run of form has seen them fall to 15th, just seven points clear of the Premier League relegation zone, ahead of Monday’s trip to Arsenal, which is live on Sky Sports.