Home » Soccer » Arnold’s plea to NSW government: Give us crowds for Saudi game 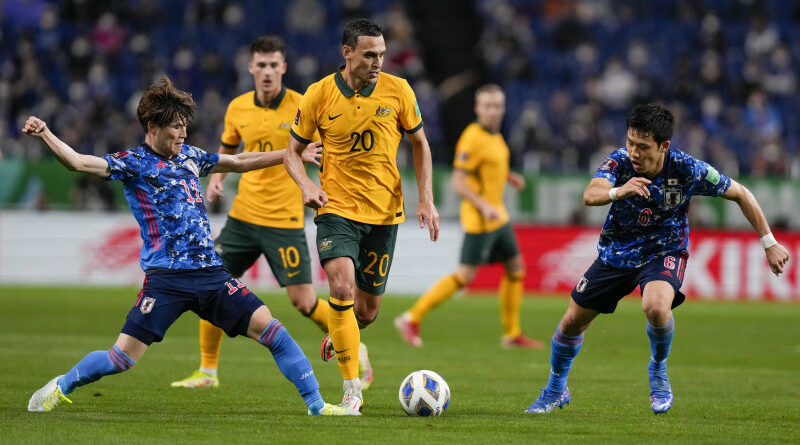 Socceroos boss Graham Arnold has appealed to the NSW government to allow thousands of fans to attend next month’s World Cup qualifier against Saudi Arabia in Sydney so that the national team can get the lift it needs from its “12th man”.

Australia were sluggish and gave the ball away far too often in a messy first half against Japan in Tokyo on Tuesday night, conceding the first of two goals in their 2-1 loss. It was their first defeat after 11 successive wins.

Arnold believes that the 15,000 fans who were allowed to attend the game in Saitama, Tokyo, were the crucial difference between the teams.

The Samurai Blue, who desperately needed the win to get their stuttering World Cup qualifying campaign back on track, fed off the crowd’s energy that had been missing in recent games. It helped them raise their efforts to get the late winner, an own goal that went in off Australian defender Aziz Behich.

“The crowd had a big part to do with that. I have watched Japan play the last three games without a crowd, and their energy was nowhere near what it was tonight,” Arnold said after the game, when asked why his team had found it difficult to maintain possession in the opening half.

“I just really am reaching out to the NSW government and really appealing to them to help us on this journey on our World Cup pathway. 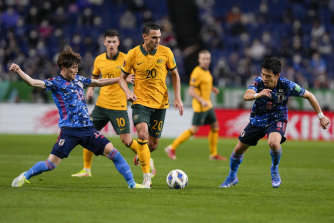 “I haven’t been home for six months, but now that NSW have vaccinated 80 per cent plus, we are still four weeks away from this game, (I really hope) that they help us by allowing fans into the stadium

“We have seen (the difference it makes) in the UK and around the world where it is 80 per cent vaccinated and everyone has got full crowds again.”

Japan began Tuesday’s game at a fast tempo and, after getting an early goal through Ao Tanaka, could have put the game to bed by the interval had they taken one of a number of chances they created.

But finishing has historically been Japan’s Achilles heel, and when Ajdin Hrustic’s sumptuously struck free kick had levelled the score with 20 minutes remaining, striking the bar on the way in, it seemed that Australia would rescue a point from another hard fought encounter with their biggest Asian rivals. Hrustic had been fouled on the edge of the area, the referee initially awarding a penalty before the VAR reversed the decision. 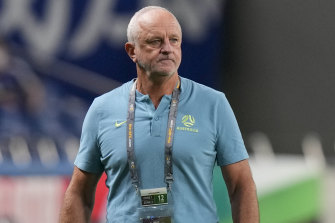 Japan, buoyed by the crowd and their desperate need to get a result (they had lost two of their three qualifiers to this point) drove on, and grabbed a late winner with five minutes remaining.

The defeat is not critical for Australia, who had won their previous three matches, but Arnold’s team would have landed a major psychological blow had they left Tokyo with a point and denied Japan the three that were vital to their chances. Saudi Arabia, meanwhile, top the group after a fourth straight win and have 12 points thanks to their 3-2 win over China on Wednesday morning.

Arnold praised his players’ improved showing in the second period.

“Second half we clicked into gear, we fought the crowd and did very well and got back to 1-1 . Again the noise and the energy the crowd gave the Japanese players in the last 15 minutes really helped get them home,” he said.

“I thought the second half we dominated them nearly the whole half. The win record is over, but we still hold it, it is a fantastic achievement by the players (but) we can stop talking about that now and move forward with a World Cup campaign.

“We are still in a great position. Japan came out, we had a great crack at them, they had a crack at us, it was an exciting game to watch.

“I really appeal to the government to help us on this journey,” said Arnold, whose team have played 11 of their last 12 matches away from home as a result of Australia’s strict COVID-19 restrictions.

Hrustic was declared man of the match, but the German-based midfielder said that was of little consequence given the result. He was sanguine about his free kick equaliser.

“If he didn’t kick me I would have stayed on my feet and probably put it in the back of the net. First of all I thought it was a penalty … they changed the decision, I stepped up and equalised, we got ourselves back in the game really well and I think we deserved more. Man of the match doesn’t mean much because we haven’t won the game.”

Mikel Arteta admits he is concerned about Arsenal’s attacking stats

‘We don’t have time to cry’: Tottenham must bounce back in Europa League qualifier, says Lucas Moura