Mikel Arteta was hardly reassuring when asked for an update on Bukayo Saka’s injury after the youngster was forced off in the second half of the 3-0 win over Sheffield United, before later confirming that Kieran Tierney is also likely to miss the rest of the season. The England international went to ground holding his thigh and made the sensible decision to come off the field.

Arsenal will be hoping that the problem was just an impact injury and not a muscular problem.

Saka appeared to hobble around after a coming together with Sheffield United’s Rhian Brewster.

He then continued to play on before eventually going to ground and conceding defeat.

But when asked if Saka’s injury was a dead leg, Arteta admitted he was reluctant to provide supporters with positive news. 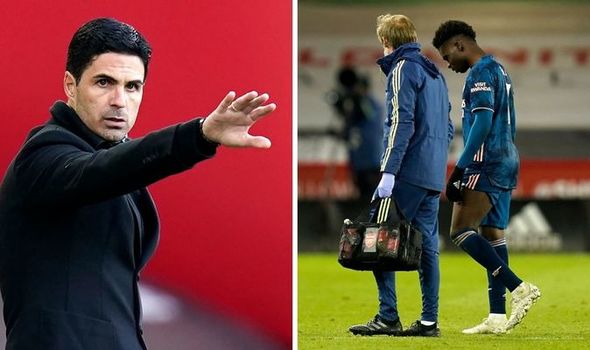 “He had some discomfort in his thigh, so I don’t know what it is,” he told BT Sport.

When asked if the problem could be muscular, he added: “I don’t know, I hope not.

“The last thing we need is another attacking midfielder or a winger with an issue. We have enough of that.”

Arteta was already without three of his attackers today in the form of Pierre-Emerick Aubameyang, Martin Odegaard and Emile Smith Rowe.

Both Aubameyang (illness) and Smith Rowe (ankle) looked set to feature before the weekend and both face a race against time to be fit for the Europa League showdown with Slavia.

Arsenal will be desperate to have their key players back for the trip to Czech Republic, for a match that could define their season.

Unfortunately, Arteta also confirmed that left-back Tierney looks set to miss the rest of the season.

The Scotland international suffered ankle ligament damage and will now try to prove his fitness before the European Championships. 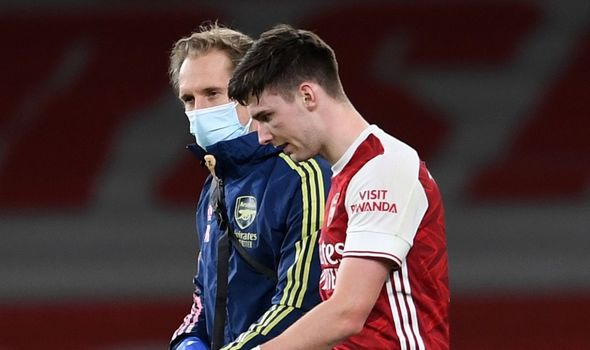 “Yeah it was an ankle problem, he twisted it when he landed,” Arteta said, hinting that all is okay. “It was pretty sore but he’s a tough boy.”

Odegaard is currently experiencing discomfort in his ankle, as he looks to shake off the problem and end his loan spell with Arsenal strongly.

Football: Uefa confirms Euro 2020 postponed for a year because of coronavirus crisis