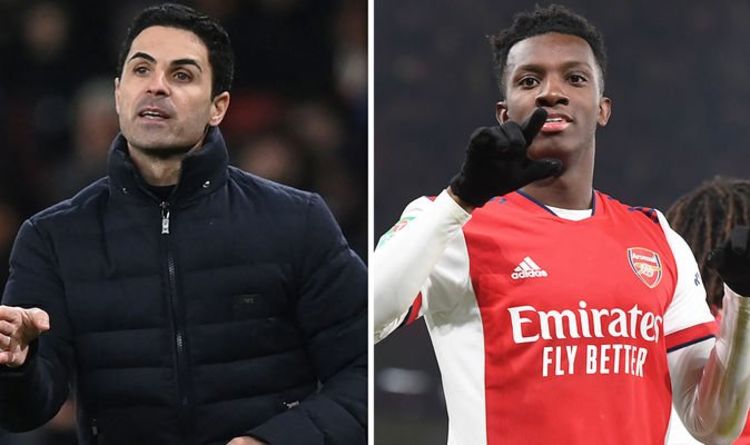 Arsenal striker Eddie Nketiah is not good enough to lead the line for the Gunners, according to former Aston Villa captain Gabriel Agbonlahor. Nketiah scored a hat-trick in Tuesday’s 5-1 Carabao Cup quarter-final win over League One side Sunderland. The forward has now scored 10 goals in his nine career appearances in the competition.

Nketiah is out of contract at the end of the season and has rejected the offer of an extension.

Arsenal boss Mikel Arteta is desperate for the former England under-21 star to stay at the club.

Nketiah has been given more game time of late by Arteta in an attempt to convince him to stay.

However, Agbonlahor thinks Arsenal should be looking for a higher quality of striker to spearhead their push towards regular Champions League qualification.

“I do like Nketiah but there’s something that I don’t think he’s going to start for Arsenal,” he told talkSPORT.

“He’s a good player isn’t he but when I’ve seen him in the Premier League I’ve just not been convinced. He’s been a bit quiet.”

However, many of those outings have been as a substitute.

Former Arsenal hero Paul Merson believes Nketiah has nothing to lose by staying at the club for a couple more seasons.

“He’s only going to get better and better. This is the place. You weigh it up. You probably go to a bottom half Premier League team.

“You sit and play on scraps, going on away games and not even getting shots on target. You’ve got to weigh all that kind of stuff up.

“I know he wants to play football now, of course he does.

“There’s not a lot of 20-year-old kids leading the line in the Premier League at the moment. This kid is a good player.

“He should have faith in his ability that he will get a start for Arsenal. Just stick around.”