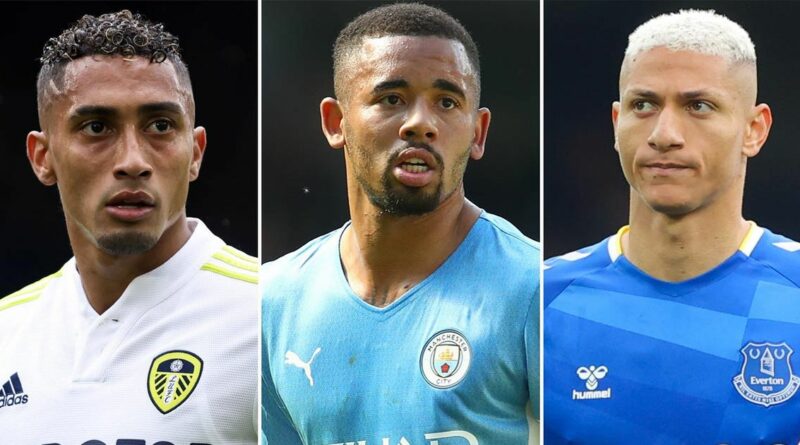 Arsenal, Chelsea and Tottenham are set for an almighty tussle in the transfer market as they go head-to-head-to-head over a hattrick of Brazilian stars.

Manchester City's Gabriel Jesus, Everton's Richarlison and Leeds United's Raphinha are all expected to move on this summer and London's big boys (sorry West Ham fans) are keeping close tabs on each of them.

The Gunners are thought to be leading the race for Jesus following news that Tottenham and Chelsea have pulled back to pursue to other targets. The 25-year-old is also keen to work with manager Mikel Arteta – who coached him at City – again and is reportedly impressed by the club's ambition.

Richarlison, who is desperate to leave Goodison Park, has emerged as a top target for Chelsea and Tottenham with both Thomas Tuchel and Antonio Conte keen to add firepower to their respective front-lines.

Conte is looking for someone who play up top as well as out wide in order to deputise for Harry Kane without having to sit on the bench, while Chelsea are after a new forward after agreeing to send Romelu Lukaku back to Inter Milan on loan.

Everton boss Frank Lampard won't want to sell his star man, but given the Toffees' perilous financial situation it might be in his best interests, particularly if he can rustle up a fee of over £50 million.

Where do you think Jesus, Richarlison and Raphinha will be playing their football next season? Let us know in the comments section below

Raphinha meanwhile is being targeted by Tottenham, Arsenal and Barcelona, with Chelsea also keeping tabs on the winger. Leeds have set an asking price of around £65 million having reportedly already turned down a bid for the player from a Premier League club.

The 25-year-old is desperate to cement his place in the Brazilian national side ahead of the World Cup later this year and feels that a move to a top European club would help him do just that.

Tottenham and Arsenal have already started strengthening this summer, but Chelsea – who are still ironing out the creases of their messy takeover – are yet to spend a penny, and considering that just five points separated the three sides at the end of the last campaign, how each of them conduct business over the next few weeks could prove absolute crucial for the season ahead.