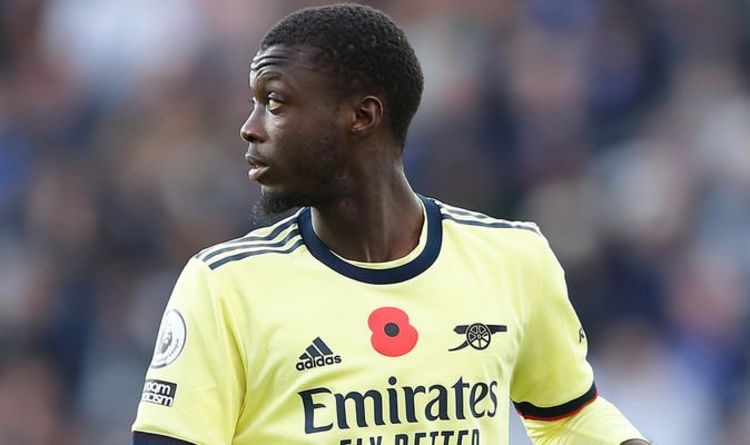 Gabriel Magalhaes assisted by Nicolas Pepe for Lille in 2019

But he is yet to score this season and is now behind Bukayo Saka and Emile Smith Rowe in the pecking order for the wide positions.

Pepe remains Arsenal’s club-record signing after joining from Lille for £72million in 2019.

However, he has failed to reach the heights Gunners chiefs expected from him.

JUST IN: Man Utd blow as Zinedine Zidane has ‘pretty much agreed’ his next job

Pepe still has two-and-a-half years remaining on his Arsenal contract.

But it appears his time at the club could be cut short.

Premier League clubs such as Newcastle and Everton have been linked with the 26-year-old.

The report says Arsenal bosses are not satisfied with the performances of Pepe, who has scored 25 goals in 98 appearances for the club.

Milan head coach Stefano Pioli wants Pepe to join in January to give them an extra boost for the second half of the season.

Pepe could leave Arsenal for around £25million (€30m), which the report claims is a ‘paltry’ figure for a player of his talent.

In May, Arsenal boss Mikel Arteta explained how Pepe was starting to fulfil his potential in north London.

Arteta said: “I am very encouraged and positive for two reasons.

“One, because he has come a long way in terms of consistency and what he’s producing in games. Not in the Premier League, but what he’s done in Europe this season.

“Individually he wants to work and he wants to be the best. When that happens and he has the talent that he has, I think it’s a really good mixture.”

However, Pepe could be shown the door at the Emirates just eight months later.

He was given more than an opportunity earlier this season to nail down a starting spot.

But his failure to do so could cost him a future with the Gunners.